The college graduation rate is flawed — and hard to fix

Share All sharing options for: The college graduation rate is flawed — and hard to fix

But these accomplishments are invisible to the federal government, who won't count any of these students — or thousands of others — when it calculates the most widely circulated college graduation rate.

Fifty-nine percent of students at four-year colleges earn a degree within six years. That's the national version of the measurement colleges are required to use for their own graduation rates according to a 1990 federal law.

What that rate should say is "59 percent of students at four-year colleges who have never been to college before, and who enroll full-time in their first semester earn a degree within six years at the same college where they started as freshmen."

That leaves out students with some college credits who never finished a degree and are coming back to try again. It leaves out students who transferred during their college careers, as 9 percent of students did in the most recent academic year. And it doesn't say what happens to the remaining 41 percent who didn't complete.

Getting more people through college has become a national priority, but the federal statistics don't necessarily show whether the US is succeeding or failing.

"There's a big focus on making sure that students receive the value they deserve for the money they're investing," says Christine Keller, an associate vice president at the Association of Public and Land-grant Universities, which wants to replace the federal graduation rate with a different measurement it helped develop.

For some colleges, it matters that we're counting wrong 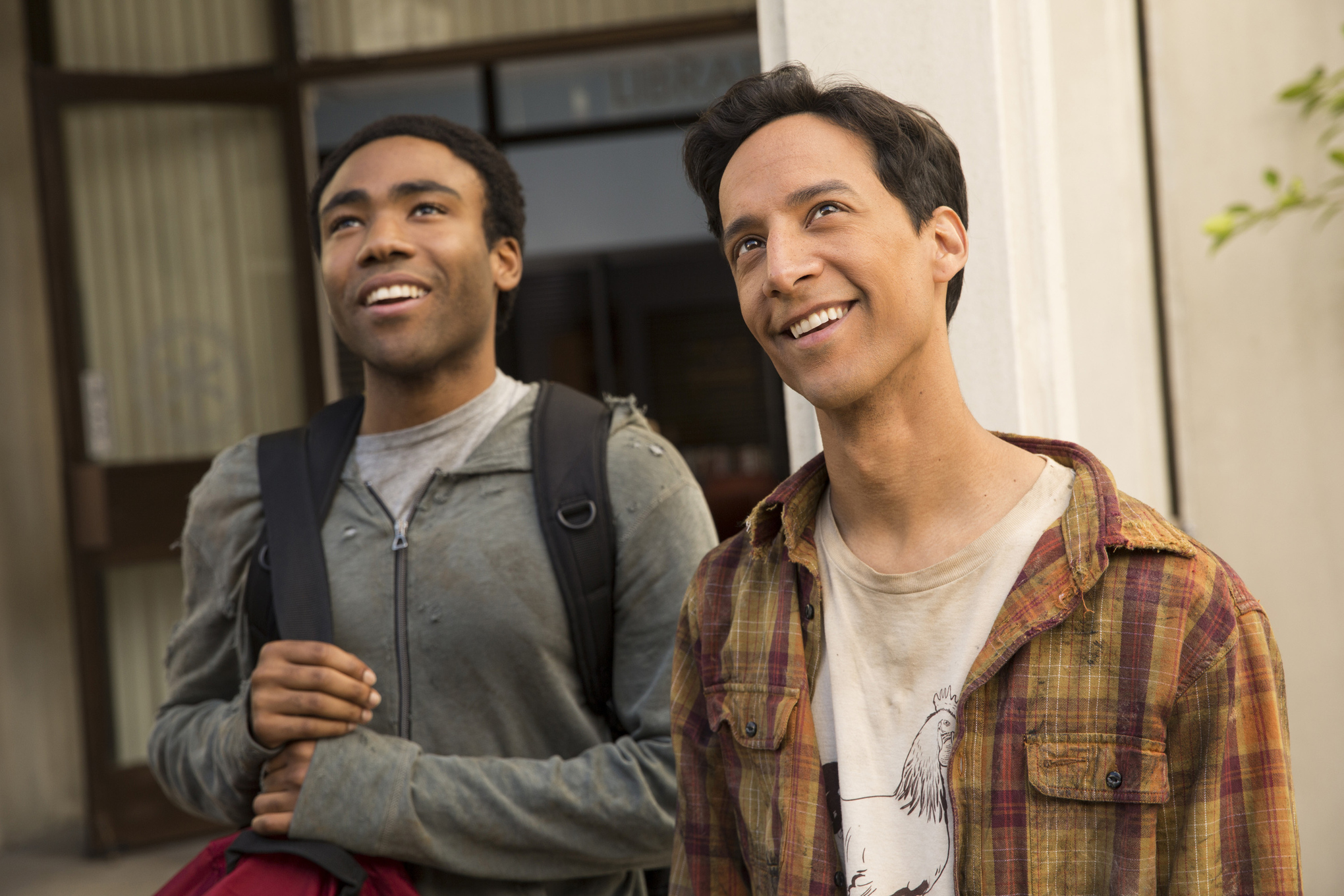 "Is that a good use of tax $?" the billboard asked. But the federal rate graduation rate measured just 6 percent of the community college's total enrollment. The other 94 percent weren't first-time students, weren't attending full-time, or both.

It's not just a public relations problem

It's not just a public relations problem — 25 states are now basing a small slice of public colleges' funding on their performance, which can be measured in part by graduation rates.

The government measures the graduation rate this way for a reason

Full-time students are more likely to finish college. Students who drop out for years and later return wreak havoc on the calculations; if they took a semester of classes, dropped out, enrolled again 10 years later, and finished their degree on time, did it take them four years or 14?
And because a law prohibits the federal government from tracking data on individual students, figuring out with certainty what happens to transfers is tricky. So is deciding whether a college deserves credit, blame, or something in between if a student decides to attend somewhere else and gets a degree there instead.
So the measurement isn't arbitrary. It's just incomplete.
"It was feasible for the data systems at the time" the 1990 law was passed, says Jack Buckley, a former commissioner of the National Center for Education Statistics. "We are in a much different world in terms of accountability."

How different would a more inclusive graduation rate be?

The National Student Clearinghouse, a nonprofit, provides an idea with its own measurements. Colleges submit data to the clearinghouse, which has information on more than 90 percent of college students nationwide.
The group doesn't calculate an overall graduation rate for four-year colleges, and it includes students who attend half-time or more. So it's hard to compare the rates directly with the federal numbers.
Still, the clearinghouse found that 60 percent of students who start at a four-year public college earn a bachelor's degree somewhere within six years; at private colleges, 70 percent do so within six years. Both are about 5 percent higher than the federal graduation rate. (For-profit colleges have the lowest graduation rate of around 40 percent, but are also underrepresented in the database compared to other colleges.) 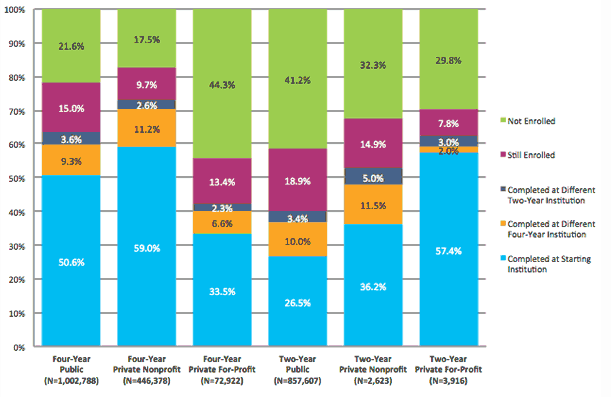 And in each sector, at least 9 percent of the remaining students are still enrolled and are still working to finish a degree.
That's not great news if they're taking on debt to do so, but it reflects reality: for many college students, life gets in the way of attending full-time all the time. About 59 percent attend part-time for at least a semester.

There may be change on the horizon

The Education Department measures other graduation rates, Buckley says: four-year rates, five-year rates, even rates that allow colleges to report transfers. Beginning in 2016, still more graduation rates will try to capture everyone.
But Congress will still require colleges to report the same rate they use now. So it's not clear if those other measurements will get traction.
The holy grail for many data advocates is a federal system that tracks individual students, much as the clearinghouse does. That would eliminate any uncertainty about whether students have dropped out, transferred, or something else. But Congress, citing privacy concerns, forbade the creation of such a database in 2008.
The Association of Public and Land-Grant Universities and other groups have developed an alternate graduation rate that uses data from the clearinghouse to show what actually happens to students after they enroll.
Using that rate, known as the Student Achievement Measure, can make the colleges' individual results look different. And it makes the flip side of the graduation rate — students who the government says didn't graduate — look a lot more hopeful. At the University of Maryland-Baltimore County, 75 percent earned a degree within six years (compared to 64 percent in the federal measurement). And just 10 percent aren't either graduates or still in college somewhere. 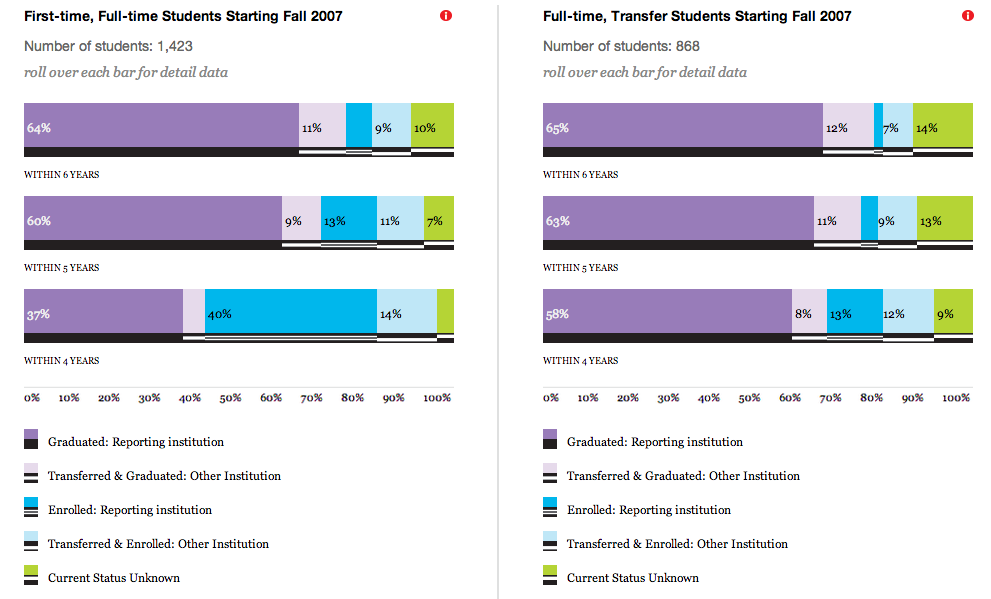 That's at least a little more worthy of celebration at graduation time.