Share All sharing options for: Same-sex marriages could make millions for Pennsylvania

One of the rarely mentioned benefits of allowing same-sex marriages: they can slightly boost your state's economy.

This three-year boost in spending will generate up to $5.8 million in tax revenue and as many as 1,142 jobs

The latest state to experience this benefit could be Pennsylvania, after a federal court struck down the state's statutory ban on same-sex marriages.

The court's decision could translate to millions for the state: a recent report from the Williams Institute found the economic boost of marriage equality in Pennsylvania will fall between $65.4 million and $92.1 million in the next three years, with about $42 million to $58.9 million coming in the first year.

This three-year boost in spending, according to the Williams Institute, will generate between $4.1 million and $5.8 million in tax revenue and create 812 to 1,142 part-time and full-time jobs. 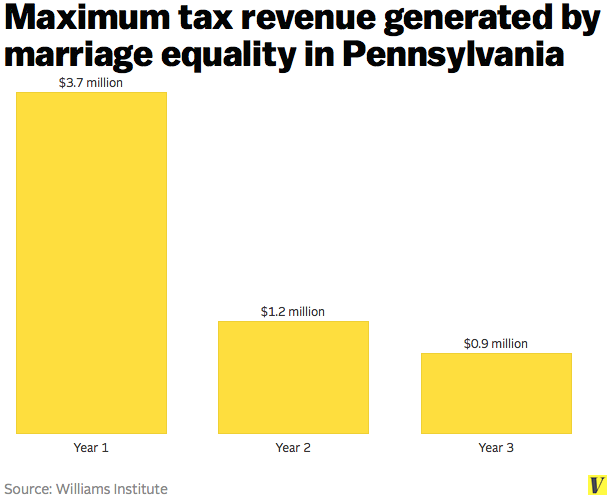 A lot of this spending will come from pent-up demand. The Williams Institute predicts that more than 11,000 of Pennsylvania's 22,000 same-sex couples will get married during the first three years of marriage equality. Through their marriages, these couples will fund wedding services, bring in out-of-state guests for ceremonies, rent out venues, book hotels and restaurants, hire caterers, and all the other spending that comes with a typical wedding.

One caveat: none of these numbers include out-of-state couples going to Pennsylvania to get married. It's very much possible, however, that same-sex couples, particularly from neighboring states that don't allow same-sex marriages like Ohio and West Virginia, will now visit Pennsylvania to seal their wedding vows.

The revenue estimates also only account for sales taxes. Revenues could increase much further, though, if businesses pay considerably more earnings taxes as a result of the wedding spending.

One caveat: while these numbers might seem quite large, they're not going to solve a state's budget or economic problems. The tax revenue generated in the first two years, for instance, is a fraction of a percent of Pennsylvania's 2014-2015 operating budget. And the new jobs make up only about 0.2 percent of the state's total jobs pool.

Still, the new revenues and jobs certainly won't hurt. It's just another way, beyond providing equal rights to same-sex couples, that marriage equality can benefit a state.