What you need to know about Democratic rising star Julián Castro

Share All sharing options for: What you need to know about Democratic rising star Julián Castro

Today, President Obama announced that he's nominating Julián Castro, the mayor of San Antonio, to be his new Secretary of Housing and Urban Development. But this isn't a normal Cabinet reshuffle — it's an attempt to improve the credentials of the most prominent Hispanic rising star in the Democratic Party, and perhaps even to set him up as a vice presidential pick in 2016.

Julián grew up in a very political household

Julián and his identical twin brother Joaquín were born in 1974 and raised in San Antonio, Texas. They were brought up mostly by their mother, Rosie Castro — the boys' father, schoolteacher Jesse Guzman, wasn't married to Rosie and split up with her when the twins were seven. Rosie's own mother, Victoria, also helped raise the boys — she was an orphan who immigrated from Mexico and "spent her whole life working as a maid, a cook, and a babysitter, barely scraping by,"Julián has said.

The boys grew up in a very political household. Rosie was a county chair of La Raza Unida, a third party organized in the 1970s. She worked to win representation, services, and opportunities for Mexican-Americans in San Antonio Texas — at the time, they were completely cut out of governance by the city's white establishment. When Julián was 18, he wrote an essay describing the many political "functions" his mother brought him to, and the "expectations" he faced there. But soon enough, he and Joaquín both won spots on Stanford's student senate. 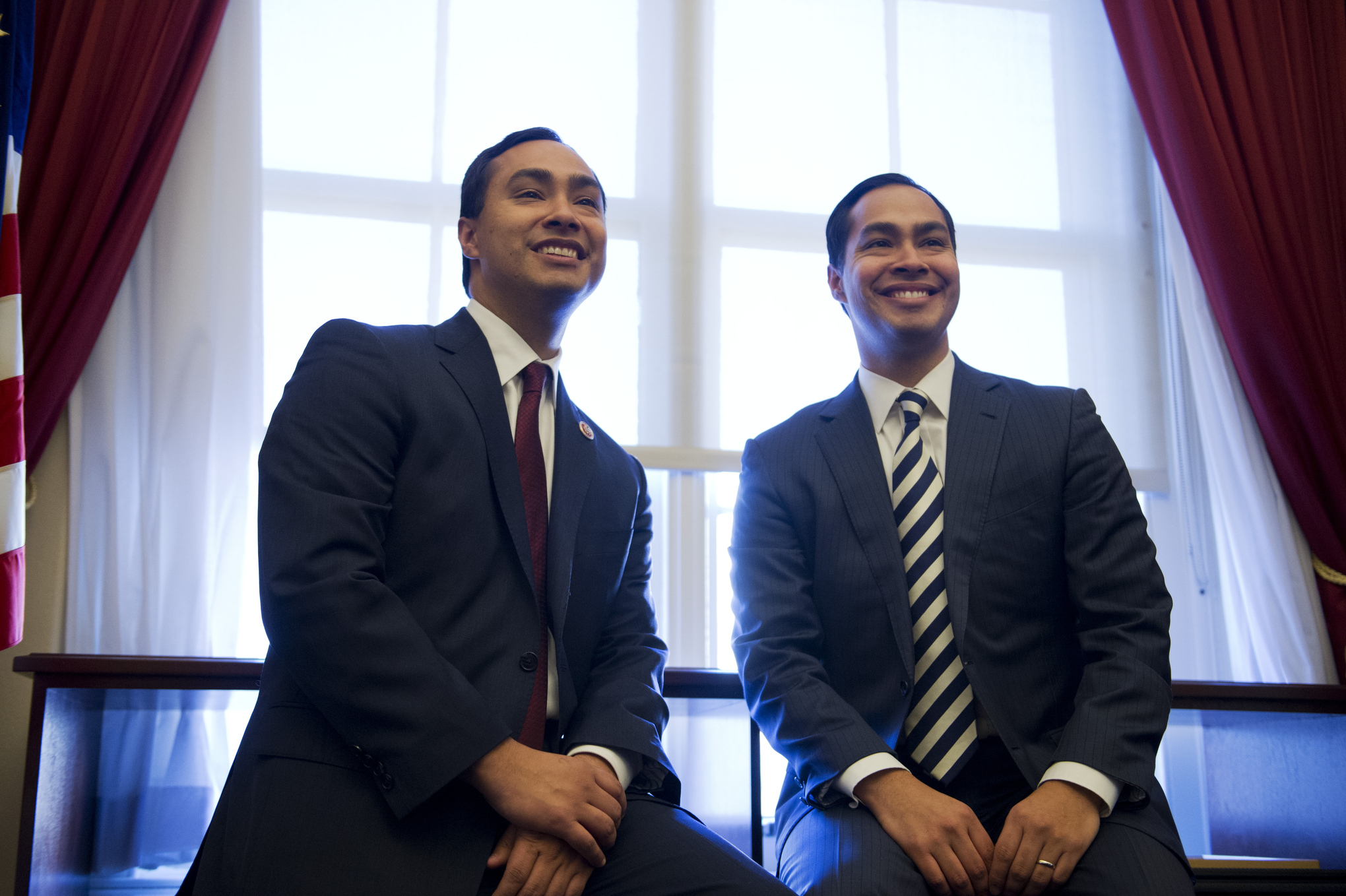 Joaquín is on the left and Julián is on the right. (Tom Williams, CQ-Roll Call Group)

After the brothers graduated Harvard Law together in 2000, Julián ran for and won a San Antonio city council seat the very next year, at age 26. After four years of serving on the council and practicing law, he ran for mayor of San Antonio in 2005, but lost. According to Zev Chafets, "Rosie Castro cast a shadow; Julián found it hard to raise money in the Anglo business community." But in 2009, the incumbent mayor retired, and Castro ran again and won. He's since been re-elected twice (to two-year terms). Joaquín, meanwhile, served ten years in the Texas state house, and won a House of Representatives seat in 2012.

In August 2012, Julián was named the keynote speaker at the Democratic National Convention — the honor that rocketed Barack Obama to prominence. Here's his speech:

What has Julián Castro done as mayor of San Antonio?

Unlike other major cities like New York and Los Angeles, the city of San Antonio gives its mayor no executive powers. These powers are actually held by San Antonio's city manager, who is appointed by the city council. So Castro didn't have formal responsibility for or decision-making authority in major policy areas. Indeed, earlier this year he was named only the fourth-most powerful person in San Antonio.

However, he has tried to use his high profile to help the city in other ways. For instance, he spearheaded and won passage of a ballot initiative to expand Pre-K to 3,700 more of the city's four-year olds each year. This effort grew out of SA2020, an initiative Castro set up to formulate an agenda for the city's future.

What are Castro's political views?

Though Castro hasn't commented extensively on some major national issues, he appears to be a a mainstream Democrat. He's promoted renewable energy, while also pointing out the benefits of fossil fuel jobs, important in Texas. After being criticized for not talking enough about climate change, he declared September 2011 "Climate Change Awareness Month" in San Antonio. While he's argued for increasing opportunity through expanding access to education, and supported Obamacare, he hasn't been particularly aggressive on income inequality issues.

On social issues, he's pro-choice and supports same-sex marriage. And he's backed affirmative action, which he's said helped him get into Stanford and Harvard Law — "I've seen it work in my own life," he told Chafets.

Why do people think Castro might be chosen for vice-president?

Much has been written about how the increasing Hispanic population could greatly help Democrats in future presidential elections. Yet with comprehensive immigration reform looking increasingly unlikely to pass, and Obama sometimes being called the deporter-in-chief, some Democrats are worried about Hispanic voter enthusiasm. This concern is particularly acute because there are currently four Republican Hispanic senators and governors who could soon be on a national ticket — Marco Rubio, Ted Cruz, Brian Sandoval, and Susana Martínez.

Since it doesn't seem likely that any Hispanic Democrats will run for president, a historic nomination of a Hispanic vice presidential candidate could, theoretically, galvanize Hispanic support and turnout for Democrats. And with the party's only current Hispanic senator or governor being Bob Menendez, who's reportedly under federal investigation, it seems that Castro — as a young, charismatic politician — fits the bill, and would demographically complement Hillary Clinton or another white presidential nominee. One potential drawback, though, is that Castro doesn't speak fluent Spanish.

How does the HUD job help qualify Castro for a national ticket?

Qualifications are in the eye of the beholder, of course, but this isn't immediately clear. No one's mentioning the current HUD Secretary, Shaun Donovan, as a potential VP pick, after all. HUD is generally considered a minor Cabinet agency — as Matt Yglesias wrote recently, "the HUD chief is not very important to housing policy." Indeed, Castro actually turned down this very job last year and indicated he would have preferred to be named Secretary of Education, according to Brian Chasnoff of the San Antonio Express-News. Plus, using HUD as a springboard certainly didn't help Andrew Cuomo get elected governor of New York in 2002 — he withdrew one week before an impending primary loss in what the New York Times called a "spectacular humiliation."

Yet the job does get Castro to Washington, where he can claim "national experience," and gives him experience managing a federal agency with a $48 billion budget. And the New York Times reported that the position could let Castro "burnish his credentials on issues of poverty," "raise his appeal among those on the party's left," and "let him develop relationships with and win favors from city leaders and activists." Plus, since the challenges for Democrats seeking statewide office in Texas are still quite formidable, this may be Castro's best option for a new job right now.