Share All sharing options for: Racists are likelier to oppose health reform when they think about Barack Obama

On Wednesday, Sen. Jay Rockefeller argued that some of the opposition to Obamacare is motivated by race. Rockefeller wasn't particularly artful in his comments and it's easy to see why Sen. Ron Johnson was offended. But Rockefeller is right.

Michael Tesler, a political scientist at Brown University, studied this question by looking at the role racial attitudes played in people's health-care opinions before and after Barack Obama became the face of health-care reform. Since 1988, the American National Election Study has been asking people what they believe about both race and health care.

Prior to Obama's election, Tesler found that race had "a substantively small and non-significant independent influence" on people health-care opinions. But that changed in the September 2009 data. "Racial attitudes were strongly linked to health care opinions in that post-Obama survey." After controlling for party and self-reported ideology, "changing from least to most racially resentful decreased white support for governmental insurance by 20 percent," That was three times larger than the effect seen in most surveys and twice as large as the effect seen in 1994 (the survey following the collapse of President Bill Clinton's health-reform plan).

That's suggestive evidence, but for technical reasons Tesler lays out in the paper, it's not quite conclusive evidence. So he ran a more direct experiment. He commissioned a survey where he described the health-reform bill to people but, in some cases, he told them it was Clinton's law, while in others, he told them it was Obama's proposal. He also asked standard survey questions measuring racial attitudes.

By associating both laws with Democrats, Tesler effectively controlled for party affiliation. But here, too, race showed its power. "Moving from least to most racially resentful decreased support for health care by 23 percent of the scale's range in the Clinton condition and 40 percent in the Obama condition."

This works in both directions, though. As this figure from Tesler's paper shows, African-American support was higher for Obama's health-care plan than it was for Clinton's proposal: 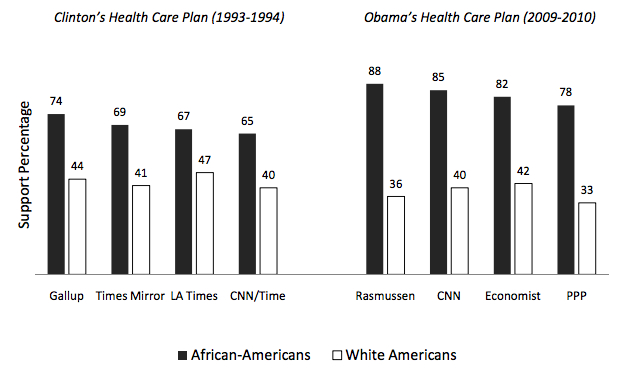 On Morning Joe today, Joe Scarborough made the point that it's very hard to find professions of racist motivations in the wild. He noted that he's spoken to hundreds of conservatives, some of therm truly hardcore, and racial animus hasn't come up once:

The marginalization of explicit racism in American life is a tremendous achievement. But there's overwhelming evidence that racial attitudes shape political attitudes in more subtle ways.

Then there's another complicating factor: increasingly, attitudes on race are being shaped by attitudes on American politics...