by Danielle Kurtzleben and Alex Abad-Santos

It looks like the lime shortage is dying down. Prices are backing off — this week, they were down almost to where they were last year, at 29 cents this week, compared to 23 cents a year ago, according to USDA data. But weirdly, in most of the stores we track, prices aren't falling. In four of them, you still have to fork over a dollar or more for one lime. 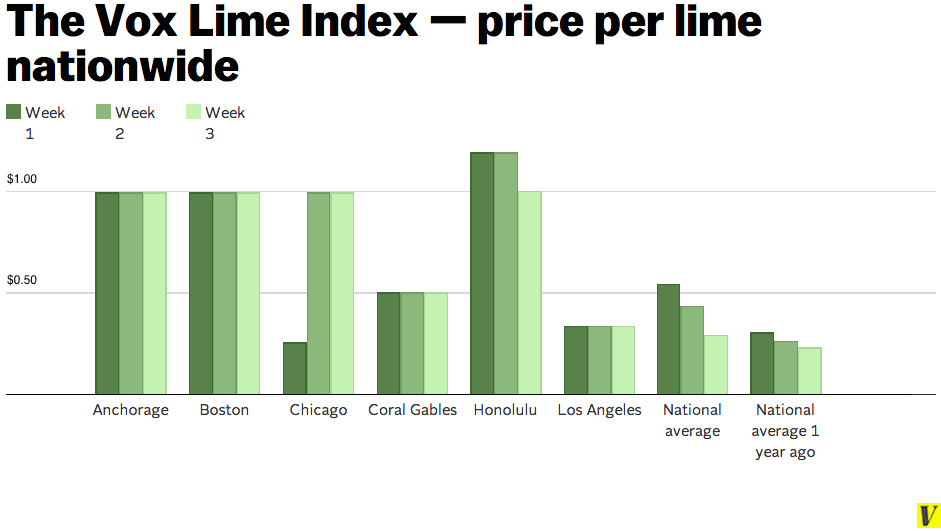 Below is a longer-term look at lime prices over the last two months: 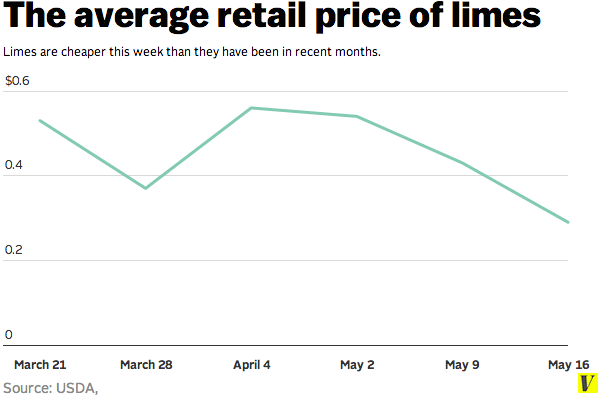 What's more promising is that wholesale sellers/distributors (the people restaurants buy their limes from) are buying limes at a much lower price too: 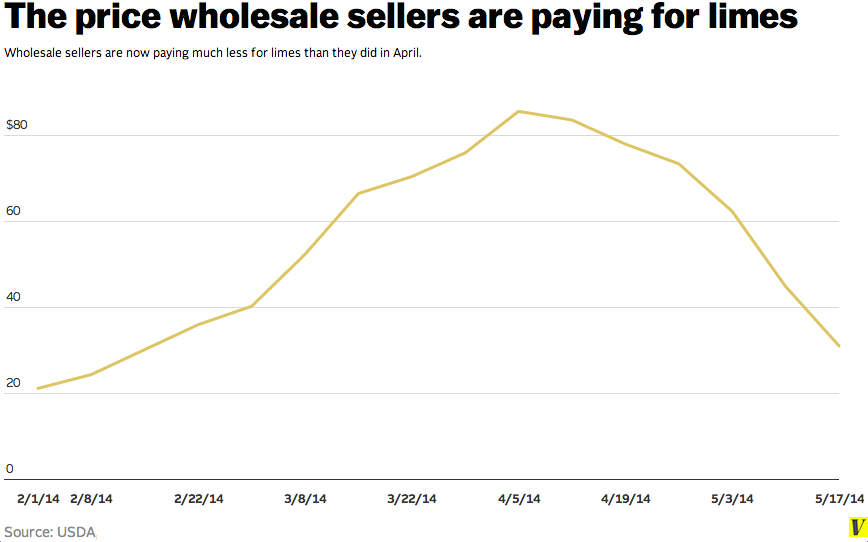 The gist: limes are cheaper than they have been, but not everywhere. And the unavoidable question then becomes: how long before limes get to their normal prices in stores like the one we called in Honolulu?

That's a little harder to say. Prices don't necessarily fall because wholesale is cheaper. Take, for example, lobsters. Because of a glut of lobster, the market price per pound (wholesale) for lobster in 2013 was around $2.89, down from $4.63 in 2005. Yet consumers never see the benefit of those cheap prices because they've been conditioned to accept high prices.

"Economically speaking, lobster is less like a commodity than like a luxury good, which means that its price involves a host of odd psychological factors," James Surowiecki wrote for The New Yorker in 2013. "If lobster were priced like chicken, we might enjoy it less" he adds, explaining that when restaurants price lobster cheaper, they have a harder time getting people to buy it.

The key to get our limes back to normal prices: don't settle for paying high prices for limes. If your store's prices remain sky-high, remember that lime prices are around a quarter nationally, and hold off.

Now for those who simply must worry themselves over shortages of specialty food items, you're in luck: there are other shortages to take this one's place! A coffee shortage has been on the horizon for a while, and a chocolate shortage is in the way.

Shortages seem like they happen all the time: news stories over the last few years have included breathless accounts of impending shortages of wine, bacon, turkeys, and chicken wings, to name a few.

So why do shortages of random food items seem to keep popping up? There are a few potential explanations.

One is that there are a lot of foods that could run short at any given moment.

"Because of the fact that there's so many varieties of things, probably if you're going to be picky you're going to find something that's a little short," says Kristen Park, extension associate at Cornell University's Food Industry Management Program.

And if a crop has a limited growing area and is largely grown outside the US — as is the case with limes, chocolate, and coffee — lots of things can go wrong: droughts, other effects of climate change, and plant diseases can hurt yields. And turmoil can interrupt supplies, whether it's cartels in Mexico or unrest in the Ivory Coast, which threatened chocolate supplies in 2011. Likewise, trade deals (or lack thereof) can threaten supplies — right now, there is a chance that French champagne and Bordeaux might not reach the US if trade talks are not successful.

But the diverse American diet, with all of its potential for shortages of specialty foods, may not really be the biggest factor. In part, it's that the media latches onto shortage stories and doesn't let go...even when the shortage isn't real. The wine shortage last year? Turns out it really wasn't there. Same goes for the overblown bacon shortage.

And that propensity to latch onto shortage frenzies may turn relatively common price swings into shortages. Below is the year-over-year percentage change in the CPI for coffee in the US: 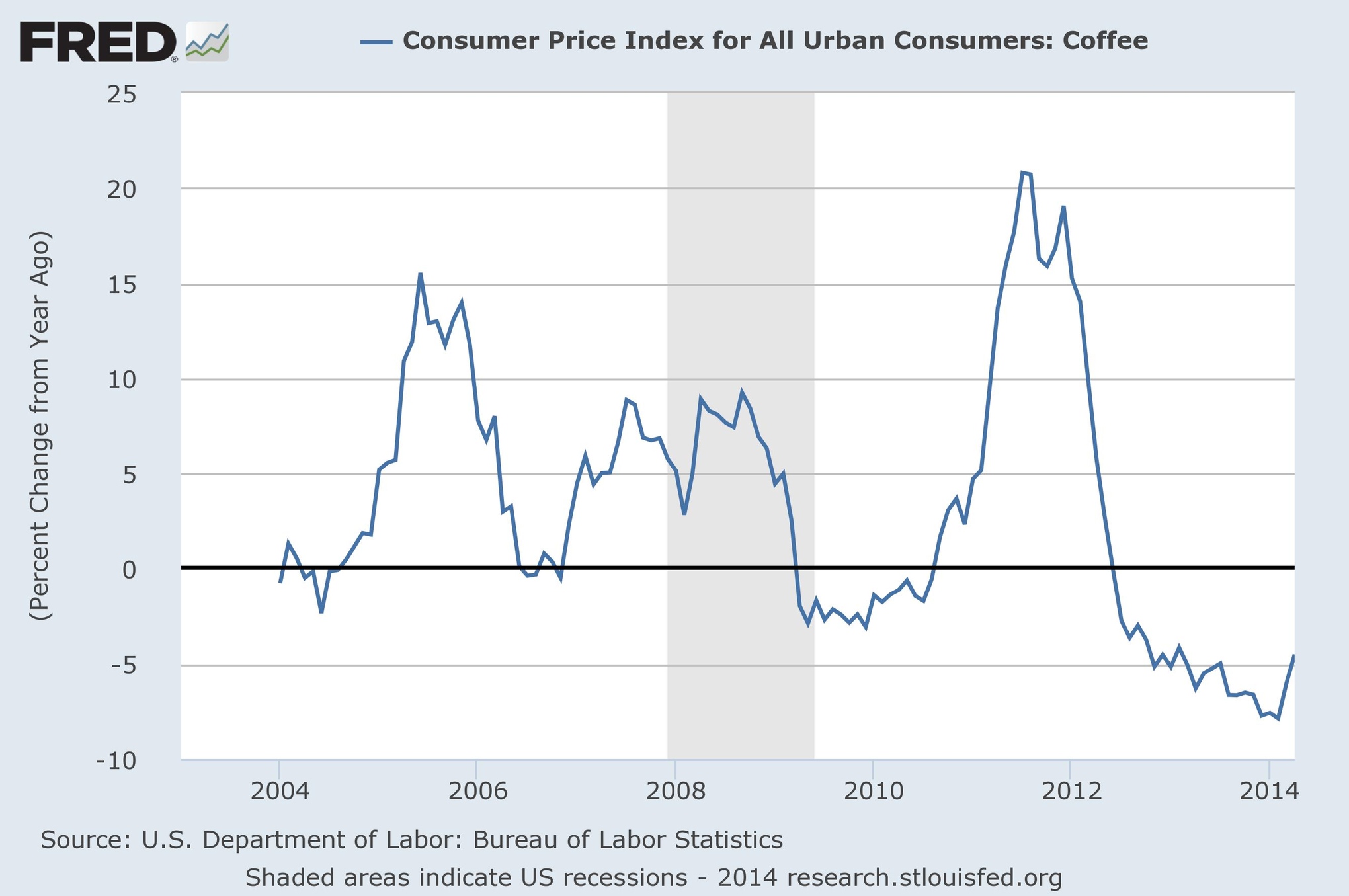 And though coffee  prices have often leapt up and down (more often up than down, to be fair), news outlets can get the attention of coffee-loving Americans by declaring a shortage. (That said, the Washington Post has said rising demand means it could seriously honestly be for real this time.)

"This has happened I think since time immemorial," says John Stanton, professor of food marketing at Saint Joseph's University. "The difference is the media is jumping on all these things as if this is the first time it happened."

And it's easy to write up a good-spirited freakout about a can-totally-live-without-it good like limes or wine, complete with hilarious headlines about how much everyone loves a good drink.

All that media frenzy can in fact hurt consumers. As we reported last week, the glut of media stories can cause people to expect higher lime pries, meaning they more readily accept $1 limes at the store.