On Tuesday, in a FedEx crate labeled "Contents: One Panda," the National Zoo panda Bao Bao will leave the US — the country of her birth — and be sent to China.

Bao Bao's return was the result of a pre-signed agreement with the US — not a diplomatic imbroglio. But the same wasn't true of her older brother, Tai Shan (née Butterstick) — the first panda to be permanently repatriated in the modern era of Chinese "panda diplomacy."

Only a few days before Tai Shan was taken to China, the Chinese government had warned President Obama not to meet with the Dalai Lama on a diplomatic visit — and threatened that it would strain US-China relations if he did. The meeting happened anyway.

Over the last several years, China's become much more generous in rewarding its trade partners with pandas — and more aggressive in using them as a bargaining chip when political relations get tense. Many experts in what's called "panda diplomacy" believe that Tai Shan was taken to China in retaliation, as a reminder to the American government that the most popular animal in its own zoo was only there thanks to Chinese generosity. 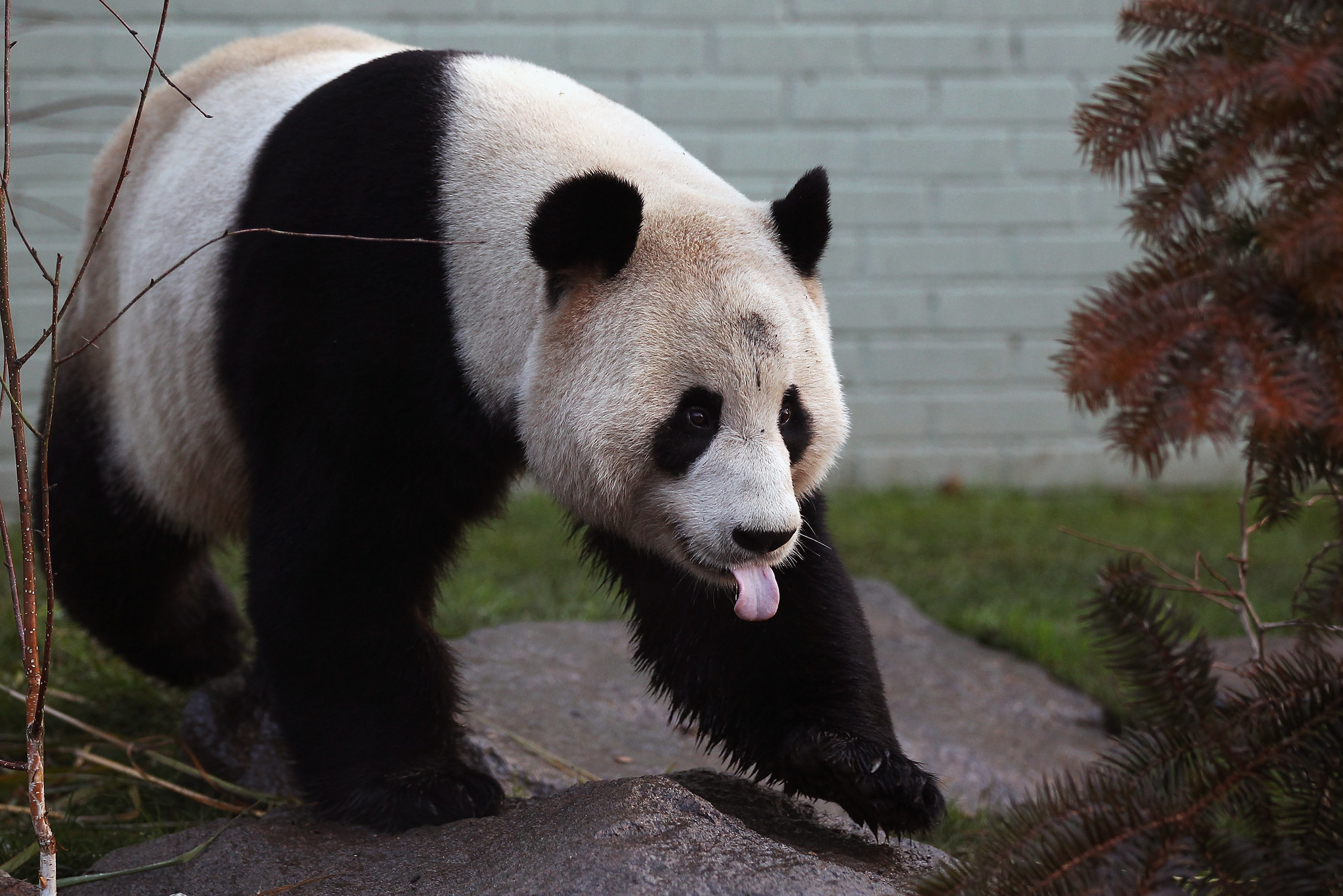 The face of panda diplomacy in Scotland. (Jeff J. Mitchell/Getty)

But it wasn't always this way. Before China could use giant pandas as a tool of diplomacy, they had to make them something that other countries would even want in their zoos.

How China helped change the way the world sees pandas

Unlike other "charismatic megafauna," pandas are only native to a single country. That gives China much more control over the treatment of pandas than, say, sub-Saharan African countries have over elephants. And it's used that control to its advantage, encouraging the world to see pandas as, in panda diplomacy scholar Kathleen Buckingham's words, the "ideal zoo animals." 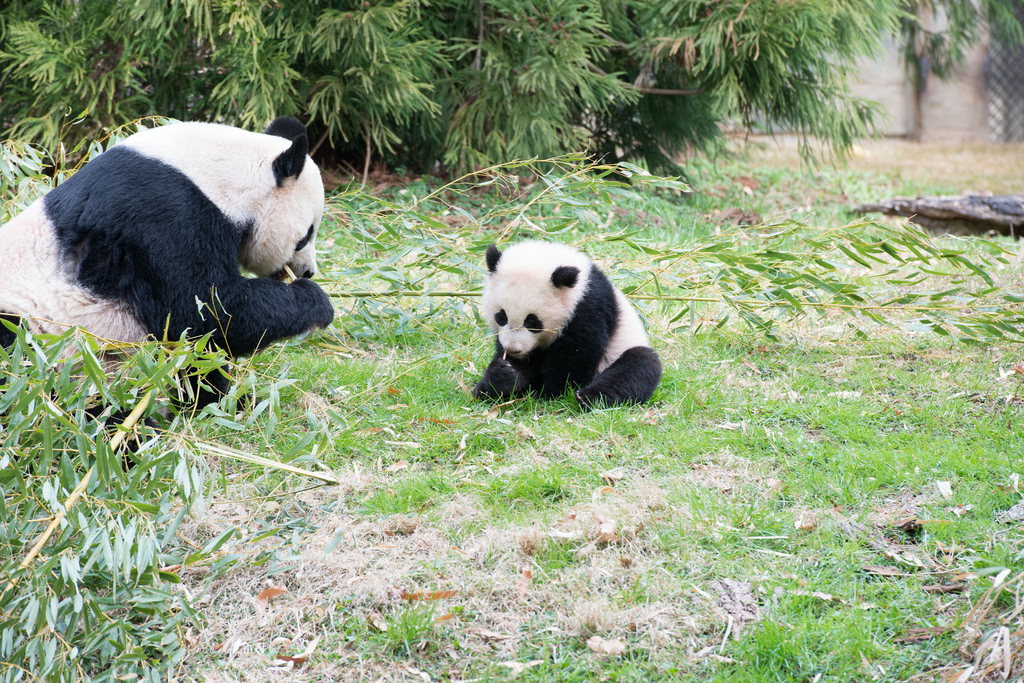 It wasn't always this way. Late-19th-century reports speculated that the panda was mostly carnivorous. And when two of ex-president Teddy Roosevelt's sons went to the remote jungles of Sichuan in 1928 with the promise of "bagging" a panda — a dead one — they played up the danger of the trip and the elusiveness of their prey, before finally killing a male panda by shooting it in the hindquarters as it walked away.

The Roosevelt boys and others might have overestimated the panda's ferocity, but not as much as one might expect. One of the pandas raised in the Wolong Reserve in China but released into the wild in recent years was, in Buckingham's words, "basically beaten to death by wild pandas."

But captive pandas are still seen as harmless, even lazy. Even in an age when some people are getting anxious about keeping large wild animals in captivity, "it's not (seen as) cruel to keep an animal in a zoo because it's so sedate." And that perception is well suited to China's strategy to use zoo pandas for international leverage.

Why we're in a new age of panda diplomacy

Buckingham and the coauthors of her paper divide modern panda diplomacy into three distinct phases.

Under Mao, pandas were given as goodwill gifts to allies like Russia. But after they were put on the endangered species list in 1984, "you couldn't just go around giving pandas for good relationships," Buckingham told Vox in 2014. 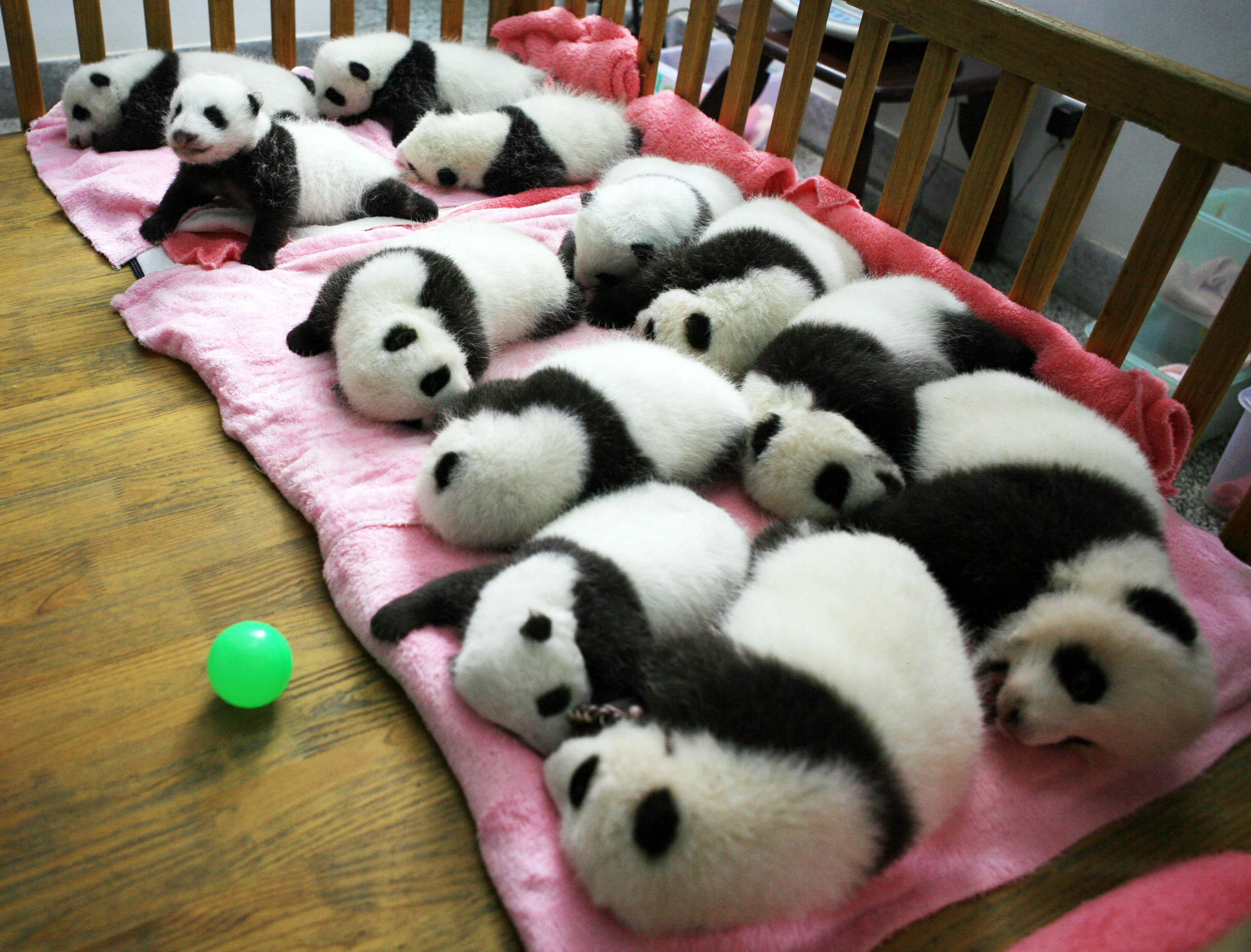 The cradle of panda diplomacy. (STR/AFP/Getty)

So China shifted to what Buckingham and others call a "rent-a-panda" strategy: loaning pandas to foreign zoos in exchange for a fee of $50,000 per panda per month. This helped raise revenues for China and reflected a national shift toward free-market economic policies under Deng Xiaoping's "open door policy," but it, too, violated conservation agreements (and looked a little tacky). It was ultimately replaced with long-term loans of pandas, with fees going in part to conservation efforts.

The third phase of panda diplomacy, which started in the late 2000s, isn't marked by how pandas are loaned, but by how many. In 2008, an earthquake destroyed much of pandas' habitat within China: 67 percent of wild pandas' habitat was affected, and all 60 of the pandas being held in the Wolong Reserve had to find temporary foster homes. Suddenly, sending pandas abroad, for money and goodwill, became a more attractive option for China.

The year before the earthquake, 11 international zoos had pandas on loan; as of spring 2014, 18 zoos had loaned pandas, and two more had signed agreements to receive pandas in the near future.

When the Chinese government started the current wave of panda loans, Buckingham and her coauthors discovered a pattern: pandas were sent to trade partners shortly after major trade agreements were signed, as a way of expressing a desire to build a long-term trade relationship.

When they first submitted their theory as a paper in 2011, Buckingham said, it was rejected as "conjecture." But in the next year or so, new panda deals fulfilled the predictions she and her coauthors had made: "the strong trading partners, basically." 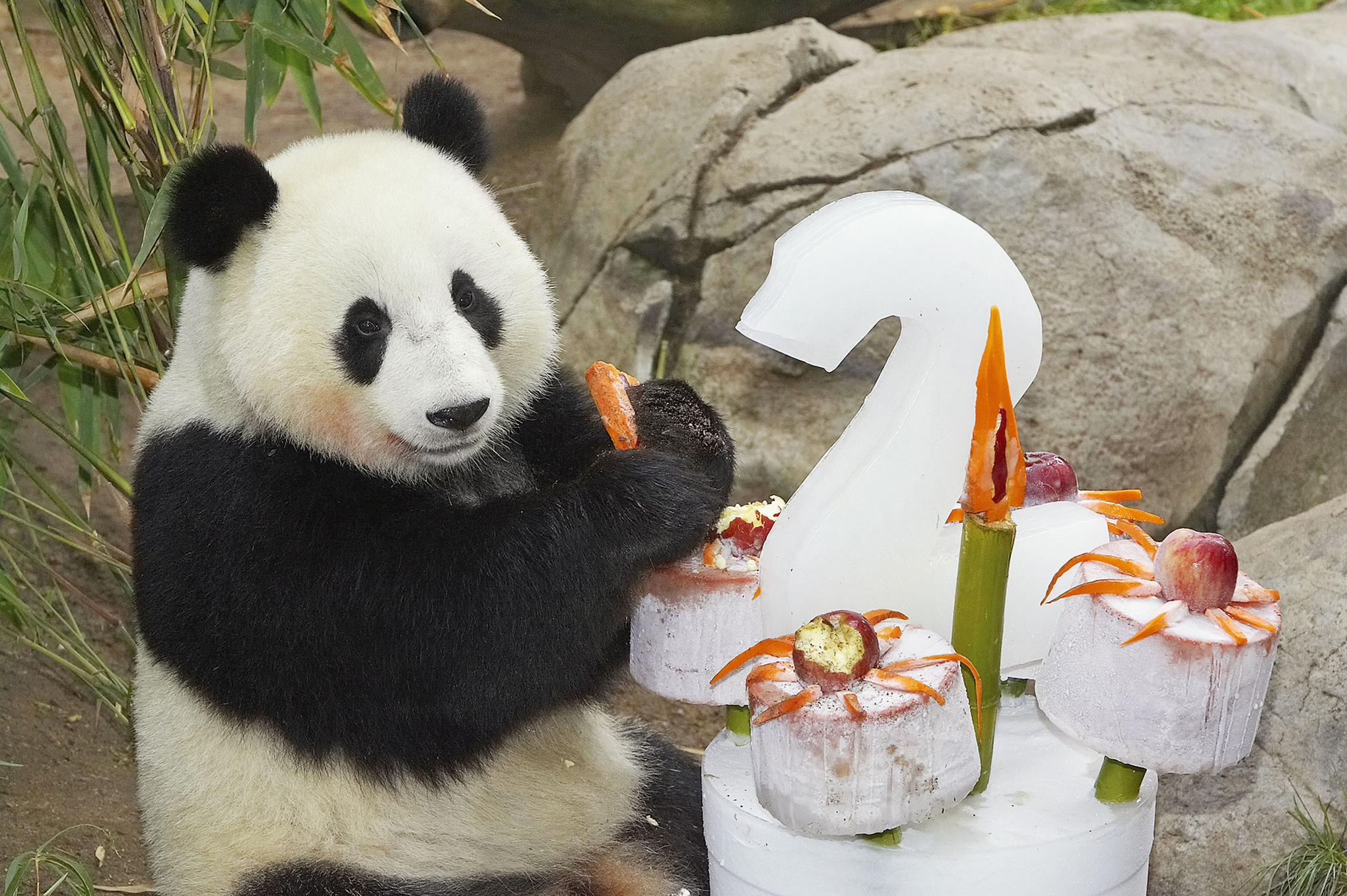 That explains the rush to give pandas to Singapore and Malaysia after the ASEAN-China Free Trade Agreement was signed (and to give Thailand an extension on the pandas it already had). It also explains loans to France and Australia — both major players in the nuclear industry — as China sought to expand its own nuclear power capacity.

The choice of which zoos within a country get pandas is important, too. The pandas loaned to the United Kingdom, for example, don't live in the London Zoo, which would be the logical place for them — they were sent to the Edinburgh Zoo, as an acknowledgment of $4 billion in trade deals for exporting Scottish salmon and Land Rovers to China.

But China also uses panda loans (as well as the trade deals themselves) to exert political pressure on countries. Traditionally, for example, China had used Norway as its supplier of salmon. But in 2010, the Nobel Peace Prize committee gave the award to Chinese dissident Liu Xiaobo — and China, in retaliation, took its salmon money elsewhere. In particular, it looked to Scotland — and, having secured Scotland as a salmon exporter, sealed the deal with the Edinburgh panda.

Sometimes economics and politics intersect. The panda loan China and Denmark agreed to in 2014 was widely seen as an expression of Chinese interest in Greenland's natural resources — but as of last fall, Chinese investment in Greenland had yet to materialize. The panda loan could also have been political: a reward for Denmark walking back its support of Tibetan independence five years ago.

And sometimes countries just have bad luck. In 2012, China inked a deal with Malaysia to loan a pair of pandas to the Kuala Lumpur Zoo in April 2014. But April 2014 came and went with no pandas. China was upset with Malaysia over its handling of missing Malaysian Airlines flight MH 370, and it expressed that displeasure by withholding the bears for a month.

But any panda can be taken away

China's making longer panda loans now than it used to — the loan to Belgium is 15 years long — and tends to extend the loans before they expire. But just as politics inflect when China gives out pandas, it's also a factor in when they take them away.

Buckingham and her coauthors see the tale of Tai Shan as a cautionary tale to governments with loaned pandas: if your guests become too popular with the public, you might find yourself pressured to agree to Chinese demands. After all, Buckingham points out, pandas "speak to the public" in a way most diplomatic concerns don't. 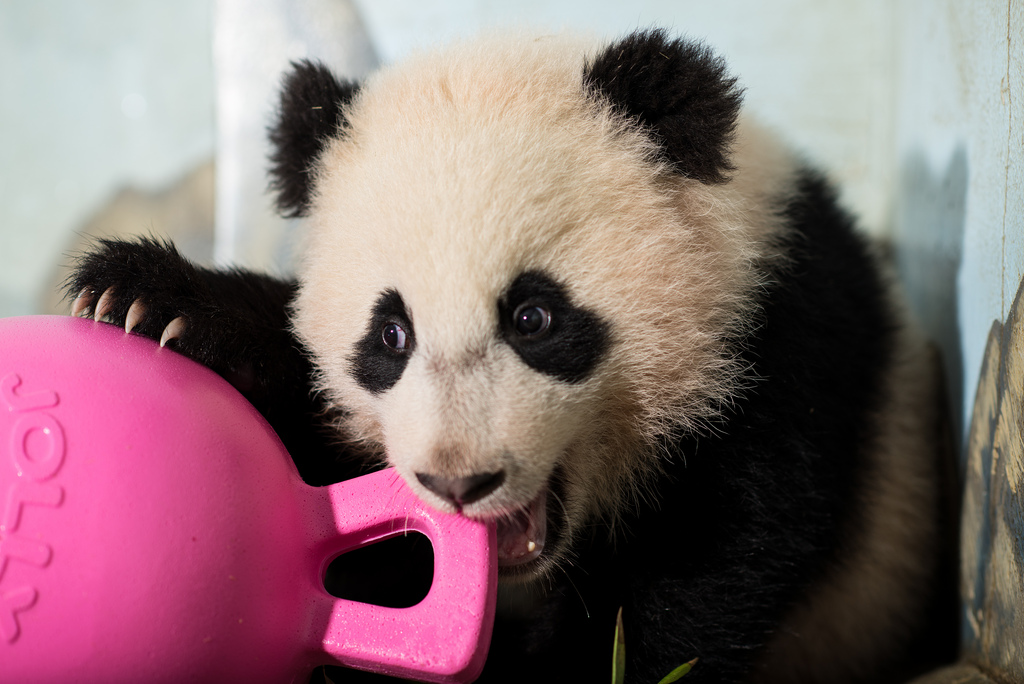 In this context, the return of Bao Bao has been surprisingly undramatic — despite the fact that President Donald Trump is a determined China hawk, he doesn't appear eager to pick a fight over Bao Bao (despite her American birth), and China isn't framing her repatriation as an act of displeasure with the Trump administration. (Indeed, the date of her return got set before Trump was inaugurated, though after he'd been elected.)

One likely reason: Bao Bao's younger brother, Bei Bei, is still at the National Zoo. So the zoo isn't being deprived of young pandas entirely. But when Bei Bei turns four, in 2019, who knows what US/China relations will look like — or what lengths the two governments will be willing to go to secure him for themselves.