Big Hummus wants the government to regulate your hummus

Share All sharing options for: Big Hummus wants the government to regulate your hummus

There is a scourge of hummus impostors making their way into American grocery store shelves — a problem that a major hummus manufacturer thinks requires the heavy hand of government regulation.

Sabra Hummus has petitioned the federal government to create a standard definition of what actually counts as "hummus." The Food and Drug Administration already does this with some other products like cream cheese (which must be 33 percent milk fat for manufacturers to market it as cream cheese). Sabra argues the hummus market has run amok; its time for Uncle Sam to step in.

"Some products labeled as 'hummus' are made entirely from legumes other than chickpeas," Sabra wrote in its filing with the Food and Drug Administration this past May. "Because these products substitute other legumes, the marketing of these products as "hummus" undermines honesty and fair dealing."

As a traditional Middle Eastern dip, hummus has two crucial ingredients: chickpeas and tahini (the latter being a paste made from ground sesame seeds). Sabra has surveyed the market and, in documents submitted to the FDA, finds these two ingredients decidedly lacking in many purported hummus products today. Here's a bit of their list of the worst violators (the full list is here): 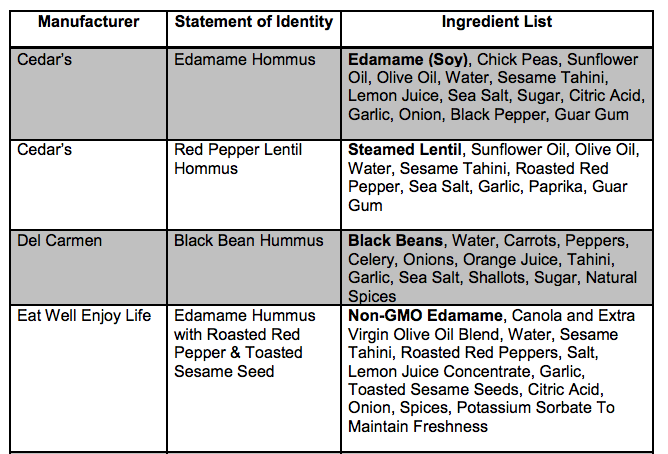 Sabra's proposed standard for hummus would "promote honesty and fair dealing in the marketplace among hummus manufacturers." To that end, Sabra proposes a definition of hummus as a food primarily composed of chickpeas and tahini. More specifically, tahini has to make up 5 percent of the hummus by weight in order for the hummus to be really, truly, counted in hummus.

A handful of Middle Eastern countries already have standards for hummus that are similar, although they tend to require more tahini (the Israeli standard, for example, requires hummus to be 14 percent tahini by weight).

As to whether the FDA will act on the petition, it's a bit hard to know. The FDA does have the authority to write definitions for specific foods when it would benefit consumers. The agency has written about 300 food standards so far. There's one for sherbet and other definitions that spell out the difference between fruit butter, fruit jelly and fruit jam.

If the FDA goes forward on Sabra's proposal, then, black bean hummus may not be long for this world.