Share All sharing options for: This viral map of American Google searches is hilarious — and totally misleading

We at Vox.com love our maps. But sometimes, pretty maps turn out too be good to be true. That's the case with this seemingly awesome map of "what each state googles more than any other." Who knew that everyone in Texas was wondering whether they had herpes? Aside from the 78,000 people who shared this map, of course. 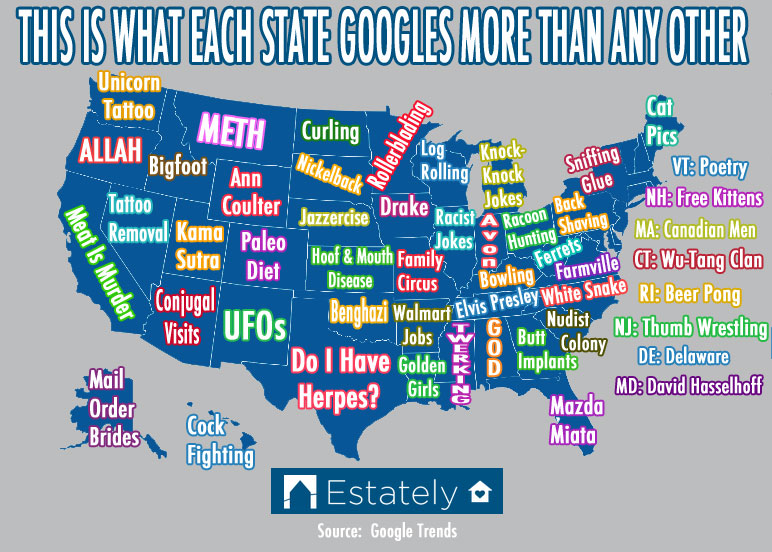 But that map is full of lies. You can't, as the original post containing the map promises, "learn a lot about America" from it. Here's why.

According to Estately, the real estate website that made the map, they created it by running "hundreds of search queries through Google Trends to determine which words, terms, and questions each state was searching for more than any other." If you put a word or a phrase into Google Trends — say, "do I have herpes?" — it'll tell you which state Googled that more than any other.

They "picked conspiracy theories and aliens and [terms] that were a bit goofy," Ryan Nickum, the map's creator, told me over the phone. "It's hard to find stuff that every single state was number one," so he "basically just was throwing everything at the wall trying to get something to stick."

What Nickum's methodology won't tell you is whether, as the the map's title implies, that term is the most-searched for term relative to other terms. Entering "do I have herpes?" into Google Trends might tell you that Texas googles that phrase the most, but it won't tell you whether Texans Google that phrase at higher rates relative to other states than "bananas," "bombs," or "Scientology." As Nickum put in our interview, he didn't want to show that Washington googled the Seattle Seahawks more than other state — that would be boring.

In other words: that map cannot say whether "do I have herpes" is the single term Texas googles at higher rates than any other state. It'll just tell you that slightly more searches for that term came from Texas than in any other state.

Here's a concrete demonstration of why these kinds of Google Trends results don't mean very much. This is what you get when you search Google Trends for "herp:"

And the results for "derp:"

And, finally, the results for "herp a derp:"

Apparently, Kentucky, West Virginia, and Texas all have claims to be the derpiest state in the Union. That's because putting random words into Google Trends is basically meaningless.

That being said, the map accomplished its real purpose of getting Estately's name out. As do many other maps that have appeared on Estately's blog. For instance, this map of where people love Kim Kardashian the most:

Or this map of state mustaches:

These are all pretty fun. I just wouldn't confuse them with, you know, actual information.