Share All sharing options for: The VA scandal, explained

Update: This article is a preliminary explainer. For a more in-depth version, check out our card stack here.

The US Department of Veterans Affairs scandal is, at its heart, a fight over scheduling procedures.

Over the past few weeks, allegations have surfaced that the VA's shoddy scheduling practices at its medical facilities have put the lives of veterans in danger — and, in some cases, contributed to patient deaths.  The problems all seem to stem from abuses of the scheduling system that the veterans' hospitals use — particularly, from hospital administrators hiding thousands of patients on secret waiting lists.

This is becoming a really big deal. Reports now allege that scheduling issues at the Phoenix, Arizona, VA hospital led to 40 deaths. President Barack Obama is talking about it. The White House and VA are both conducting investigations, and Congress is holding hearings about the issue.

In short, multiple pressures have worked together to create perverse incentives and confusion at VA hospitals around the country:

What went wrong at the Phoenix hospital in particular? 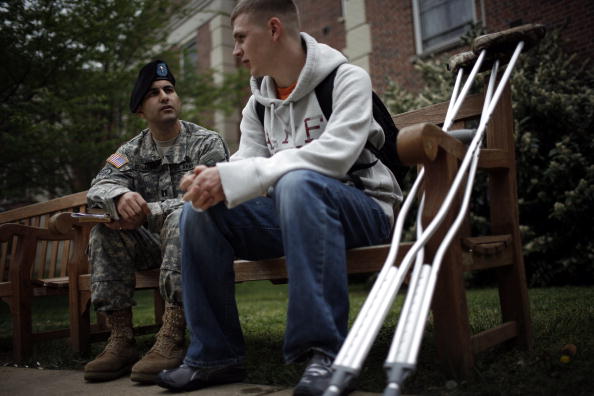 It's important to emphasize that everything at the Phoenix facility is, for now, a series of allegations. It's not confirmed that 40 veterans died as a result of shoddy practices. The investigations will find out whether that's really what happened.

With that caveat out of the way, here's what we know so far: CNN reported that a secret wait list may have contributed to the deaths of 40 veterans and delays for as many as 1,400 to 1,600 sick veterans.

A preliminary report from the VA's inspector general confirmed that at least 1,700 veterans were waiting for care outside the official system. The inspector general also found veterans waited an average of 115 days for their first primary care appointment — much longer than the 14-day goal set by the VA and the 24 days previously reported by Phoenix officials.

the allegations have grown beyond Phoenix

Since the initial reports, the allegations have grown beyond Phoenix. The American Legion, a veterans advocacy group, has tracked scheduling issues in up to 18 states. 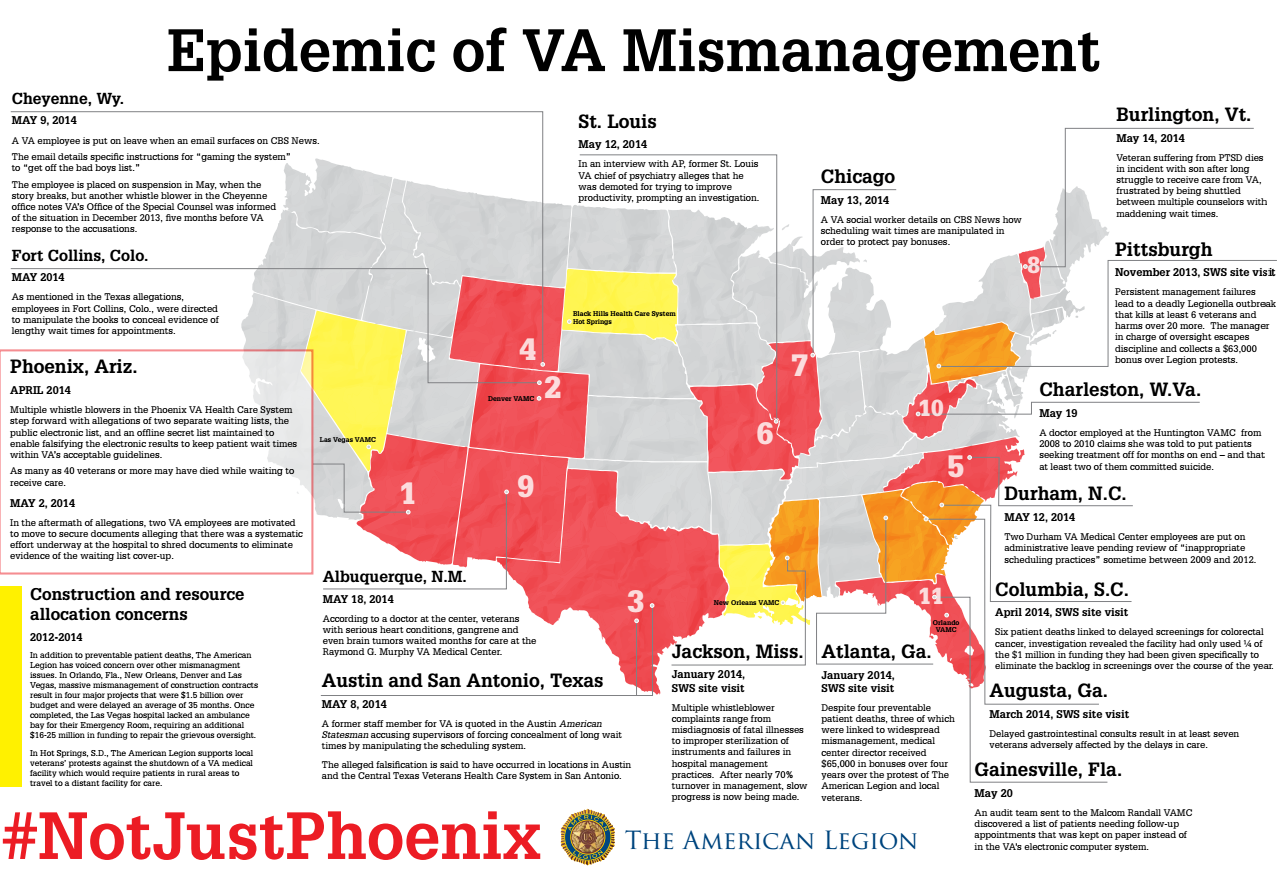 Who's been affected by these wait times?

At this point, all kinds of veterans from all over the country have been affected by the VA's scheduling problems. But cancer patients in particular seem to have been hit the worst in several cases.

A previous fact sheet from the VA linked 23 patients' deaths to delays in gastrointestinal cancer tests and treatments. CNN tracked one particular veteran, 71-year-old Thomas Breen, who died of bladder cancer after waiting for months just to set up an appointment. By the time Breen's family got a call from the VA to schedule an appointment, Breen was dead.

How did all of this go so wrong? 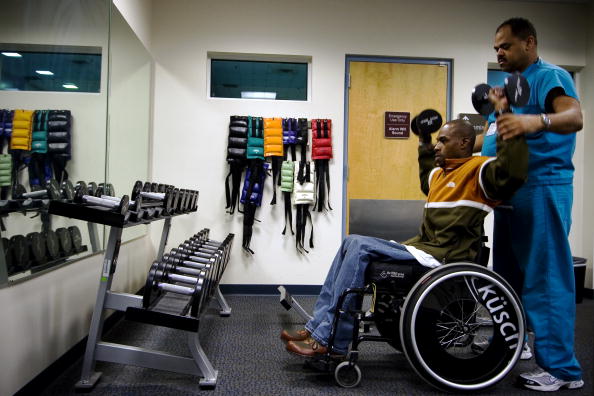 At the VA, there are rules to try to ensure patients are seen in a timely manner, typically within 14 to 30 days. If it takes longer than 90 days to schedule a patient due to overcapacity, waiting veterans are supposed to be entered into an electronic wait list that tracks patients and makes sure their appointments are prioritized.

But that's not how it works in practice. And since as far back as 2000, the Government Accountability Office (GAO) has been calling on the VA to adjust its scheduling policies. Most recently, the GAO reported problems in 2013 and 2014.

"the way the system is set up, if someone wanted to go in and manipulate it, it would not be hard to do"

Debra Draper, health-care director at the GAO, points to the lack of oversight and ambiguous policies as the two main drivers of scheduling problems. As she explains it, the VA's policies make it unclear whether, for example, hospitals are supposed to prioritize physician's or patient's desired dates for appointments.

These issues, of course, might not explain nefarious cases like those alleged in Phoenix, where medical providers are accused of purposely gaming the system to mask long wait times. But it does explain some of the many other scheduling problems now popping up across the country, where confusion and ambiguity in policies have led schedulers to inadvertently do the wrong thing.

There is also weak federal oversight, which allows problems like those found in Phoenix to go on as no one checks in to ensure rules are being followed. One example of such lax oversight: the GAO, in one of its reviews, found three of four clinics certified themselves as in compliance with scheduling policies, but none of them actually were. The VA could, in theory, audit these facilities, but it rarely does — largely because the issues were out of the public spotlight until now.

"Certainly, the way the system is set up, if someone wanted to go in and manipulate it, it would not be hard to do," Draper said a previous interview. "But in some facilities, they just don't really understand what they're supposed to do, and sometimes they do things incorrectly. It really gets back to the ambiguity in the policies and processes, and on top of that the lack of oversight."

Why can't the VA just schedule patients in a timely manner? 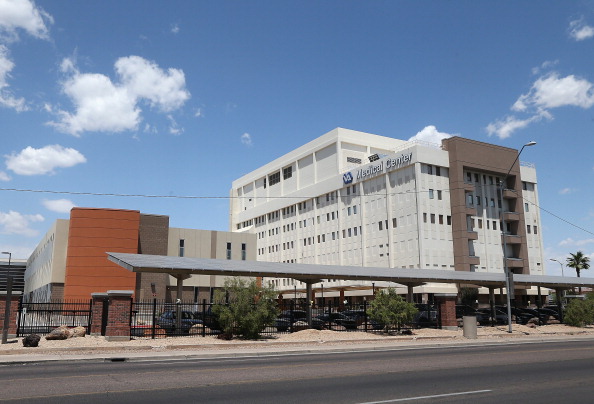 In short, the VA has more patients than it can take in.

"We were told by staff in some facilities that increased demand and shortages of some physician specialties contributed to the wait times," Draper wrote in an email.

Some of those shortages represent a nationwide problem with doctor shortages, but part of the problem could be rooted in roadblocks put up by the VA. Right now, doctors need to get certified by the American Board of Medical Specialties and the American Osteopathic Association to work for the VA. The American Board of Physician Specialties (ABPS) has criticized this requirement: it argues that smaller boards like ABPS should be able to certify health workers and, therefore, speed up the approval process.

Increased demand is also a looming problem: thousands of military veterans have come home from Afghanistan and Iraq in the past decade. That's kept the amount of veterans in the VA system up, and it could increase demand further in the future as veterans get older and, most likely, sicker.

Others blame the scheduling issues on funding problems. A whistleblower, for instance, told the Washington Examiner that cost-cutting measures led to delays in life-saving cancer tests. Richard Krugman, a former VA doctor whose complaints were in part verified by the VA, claimed his boss required patients to test positive in three successive screenings for bloody stools before they could get colonoscopies. As a result, Krugman estimated that 15,000 patients who should have gotten colonoscopies never did or had their care delayed.

But the VA hasn't been doing so bad when it comes to funding in recent years. President Barack Obama has bragged about increasing VA funding during his time in office. Indeed, the VA's budget numbers show discretionary spending — most of which goes to medical services — rising over the years. 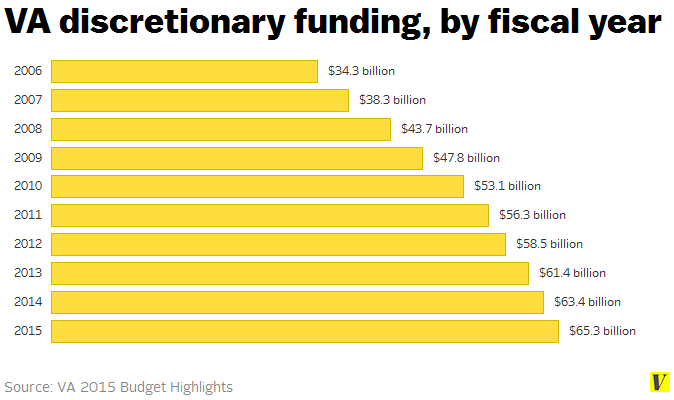 Still, some groups think more funding is needed. Veterans advocates previously pushed Congress to pass a $24 billion bill that would expand education and health services for veterans, but Senate Republicans blocked the bill due to budget concerns.

Whether the ongoing scheduling problems would be fixed with more money is, however, a matter of debate. Draper argued that, based on the GAO's findings, many of the issues are strictly about the policies and how they're set, not funding.

What could be done to fix these issues?

The first step, obviously, is to find out what's actually happening on the ground. For that, the VA has launched its own investigations, and the White House sent a top aide to Phoenix and promised to hold anyone involved in the scandal accountable. 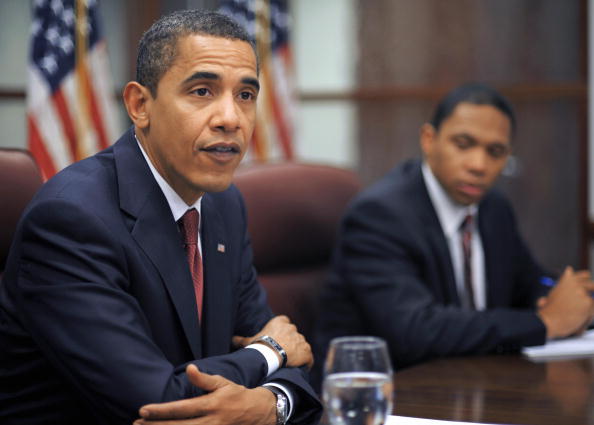 The next step, critics argue, is to ensure these issues don't happen again in the future by fixing the underlying problems.

Along with its findings, the GAO recommended VA administrators take steps to impose more stringent scheduling standards and regularly check if they're being enforced through increased oversight at both the federal and local levels. But, years later, the VA is still looking into how to apply many of the suggestions instead of actually implementing them.

Beyond these measures, Draper says the VA's inadequate scheduling system, which is now more than 25 years old, is in dire need of upgrades. But upgrading these systems would presumably require more funding, which might not be able to make it through a dysfunctional Congress.

Several veterans groups regularly put out a dream budget with policy and funding proposals that usually calls for more funding than Congress and the White House ultimately allocate. The latest budget in particular told lawmakers to avoid cutting funding to the VA's medical services in the future, because it could cripple the system as more veterans from Iraq and Afghanistan demand care.

The right-leaning advocacy group Concerned Veterans for America also has some suggestions. One proposal to increase accountability would allow top VA officials to more easily fire underperfoming VA managers and employees — something that is reportedly very difficult today. The House of Representatives already approved a bill doing just this, but it's uncertain if it will make it through the Senate.

Another suggestion would let veterans, particularly those in parts of the country where no well-run VA facilities are available, get VA-funded care at non-VA hospitals and clinics. That would, of course, present a radical departure from the centralized health care the VA currently provides. But it also might ease wait times and demand at current VA facilities, while letting veterans get the best care they can possibly obtain.

What else should I read about this?