What you should know before seeing X-Men: Days of Future Past

Share All sharing options for: What you should know before seeing X-Men: Days of Future Past

On Friday, X-Men: Days of Future Past will open in theaters. Half reboot-half sequel, the film is built on the backs of the four X-films before it (excluding the two Wolverine-specific movies). There are a lot of characters and backstories to keep track of, as new mutants have been introduced in every film. So here's a brief (mostly spoiler-free) guide to the questions you might have about what the best X-film in years.

What is X-Men: Days of Future Past about?

The film is based on a popular story arc in the X-Men comics books. Without being too spoilery, the story is set in the future where the X-Men, mutants, and even regular humans who may bear mutant children are being eliminated by big robots called Sentinels. The only way the X-Men think they can stop this, is by going into the past.

Is it any good?

Note: DOFP director Bryan Singer is the subject of two sex assault lawsuits. This post only talks about the film, not his personal behavior.

DOFP is in a precarious position. It's the sequel to the well-received X-Men: First Class, which undid some of the damage Brett Ratner's X-Men: The Last Stand did to the franchise by rebooting the series with new characters.

Ratner's Last Stand was far and away the most ill-received X-Men film of the franchise, achieving a 58 percent on Rotten Tomatoes (First Class got 87 percent). Ratner sullied the good work that director Bryan Singer and screenwriter Matthew Vaughn did in the first two films, and dumbed down the franchise.

Ratner had inherited a superhero franchise that was loyal to the messages about discrimination, prejudice, and being an outsider from the comic books. Last Stand traded the brains and thoughtfulness of the first two movies for more action. The themes of the previous two X-Men movies — the way humans treat outsiders and the options minorities have when their civil rights are threatened or ignored — replaced with bigger fights, a loose love story between Wolverine and Jean Grey, and a promising plot about a mutant "cure" that was thrown by the wayside.

Therein is DOFP and Singer's biggest achievement: he cleaned up the damage Ratner did to the franchise, allowing for a more promising future of X-Men movies. DOFP is currently scoring a 95 percent on Rotten Tomatoes, which is in Avengers territory.

DOFP thinks more like the first two X-films. The film questions what pushes humans (and mutants) to kill and at what point does one's own survival or grudge or worldview factor into that. It's hard to find a scene in DOFP where that question isn't being explored, and it is so delicately handled that at no point is there a fatigue.

Singer also excels at translating the action from the pages of the comic books without making it, well, cartoonish. That isn't easy. Singer displayed this talent when he brought Nightcrawler's powers to life in X2:

Singer brings more of that genius to DOFP (see: Blink below).

There are a lot of X-Men in this film

This film will feature the largest X-Men roster out of any X-Men film in franchise history (by my count it was 15 or 16, depending on whether or not you count Quicksilver as an X-Man): 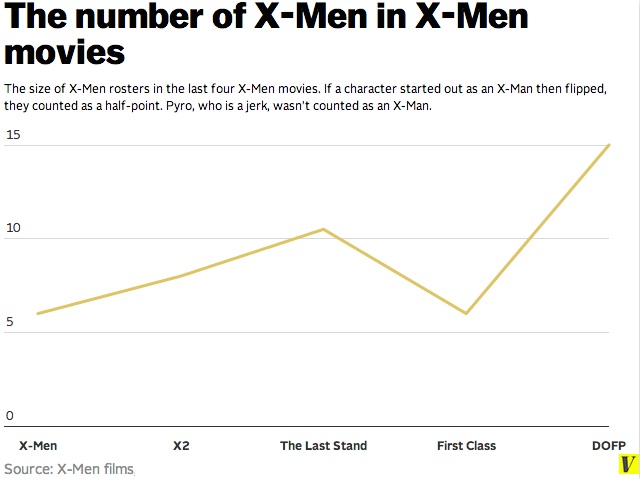 The rise of the X-Men roster size in this film has to do with the story's plot. In the future, with everyone on the brink of extinction, everyone is on the same side. So you have returning characters like Storm (Halle Berry) and Colossus (Daniel Cudmore) teaming up with Magneto (Ian McKellen). Kitty Pride (Ellen Page) and Iceman (Shawn Ashmore) are back again too.

But there are some new recruits. Here's a brief GIF-assisted breakdown of the new characters (whom you may have seen in the trailer):

Blink (Bingbing Fan): Blink's power is teleportation. She can manifest this power into tiny dagger-like projectiles, which rip open portals. If someone jumps through a rip, they are teleported to a different location. In this GIF, a sentinel is caught in one of Blink's portals and is teleported:

Blink uses her power to teleport a sentinel away. Courtesy: Fox

Sunspot (Adan Canto): Sunspot is Brazilian superhero who has the power to absorb and use solar power. In the comics, he initially converted the sun's power into super strength, but more recently has been able to channel this energy into blasts of heat:

Warpath (Booboo Stewart): Warpath is a Native American mutant with superhuman strength, agility, and senses. His most important power in DOFP is the ability to sense danger coming from miles away:

This isn't that visually impressive, but thanks to his heightened senses Warpath is able to alert the others of impending danger. Courtesy: Fox

Bishop (Omar Sy): Bishop has the power to absorb energy and then redirect or channel that energy into blasts. In this GIF, Sunspot is "powering" Bishop up, so that he can fight later:

Who else is new?

The other two major new characters are Boliver Trask (Peter Dinklage), who is the main bad guy, and Quicksilver (Evan Peters). Quicksilver, despite his goofy appearance (which I have made fun of in the past), steals the movie.

An interesting thing to keep in mind here is that Quicksilver and his sister, The Scarlet Witch, are actually the first characters in the Marvel universe to be subject to a rights dispute. Because of past events like Marvel Entertainment going into bankruptcy and Disney acquiring Marvel, the characters have been split between various studios. Sony has the rights to Spiderman, Fox has the X-Men, its villains and The Fantastic Four, and Marvel/Disney have pretty much everyone else and The Avengers.

Quicksilver is at various points a member of the X-Men, an X-Man villain (he's Magneto's son), and an Avenger. He has a role in DOFP but also will appear in Avengers: Age of Ultron next year. He will be played be different actors (Aaron Taylor-Johnson will play him in the Avengers), will look different, and because of the rights dispute, will likely have his origin story changed in the Avengers movie.

At the end of the movie, like almost every single Marvel-sourced movie, a snippet of a scene will appear. The one that appears in DOFP might be confusing for casual fans. The scene drops fans into what looks like ancient Egypt with a bunch of people chanting and bowing before a blue-skinned guy, who appears to be creating pyramids and whatnot with the power of his mind.

The people are chanting the name "En Sabah Nur", better known in the Marvel universe as Apocalypse a.k.a. the skinny blue-skinned guy. Apocalypse is one of the biggest, baddest, most fearsome villains in the X-Men universe and is blessed with the powers of immortality, teleportation, and superhuman strength.

In the comic books, he's accompanied by a team of baddies known as the Four Horsemen : Death, Famine, War, and Pestilence. This explains the ending shot of Apocalypse with four people on horses in the background. Fittingly, the next X-Men movie is called X-Men Apocalypse, signaling that this end-credit scene might be setting up the next movie.