Should we try to fight rising sea levels — or retreat from the coasts?

Share All sharing options for: Should we try to fight rising sea levels — or retreat from the coasts?

The world's sea levels are expected to rise 1 to 3 feet — or more — as the planet heats up in the coming century. The more greenhouse gases we emit, the bigger the rise, but we've already locked in at least some sea-level increase no matter what.

We've already locked in some sea-level rise, no matter what

So what should the millions of people living in low-lying coastal areas do?

Broadly speaking, there are three ways to deal with sea-level rise. First, large coastal cities like New York or Boston or Tokyo will need to spend billions to erect dikes and other defenses to fend off the rising oceans. Second, some coastal infrastructure will have to be elevated.

But there's a third option that rarely gets as much attention — retreat. In many areas, it may make more sense for residents and communities to flee inland rather than fight the rising seas.

In a 2014 paper in Climatic Change, Carolyn Kousky argues that there are inevitably going to be parts of the United States where dikes and artificial defenses against sea-level rise probably shouldn't be built. Often, the barriers just won't be worth the cost. In other regions, seawalls might create more problems than they solve — by, for instance, increasing coastal erosion or by destroying crucial wetlands.

For these areas, Kousky argues, "managed retreat" is probably the best option. But coastal communities will need to start planning ahead of time. In some places, that may mean restricting development in high-risk areas or not subsidizing reconstruction after hurricanes and other disasters. But there aren't any easy policy options here — and in many places, the process could get messy and controversial.

The case for retreat 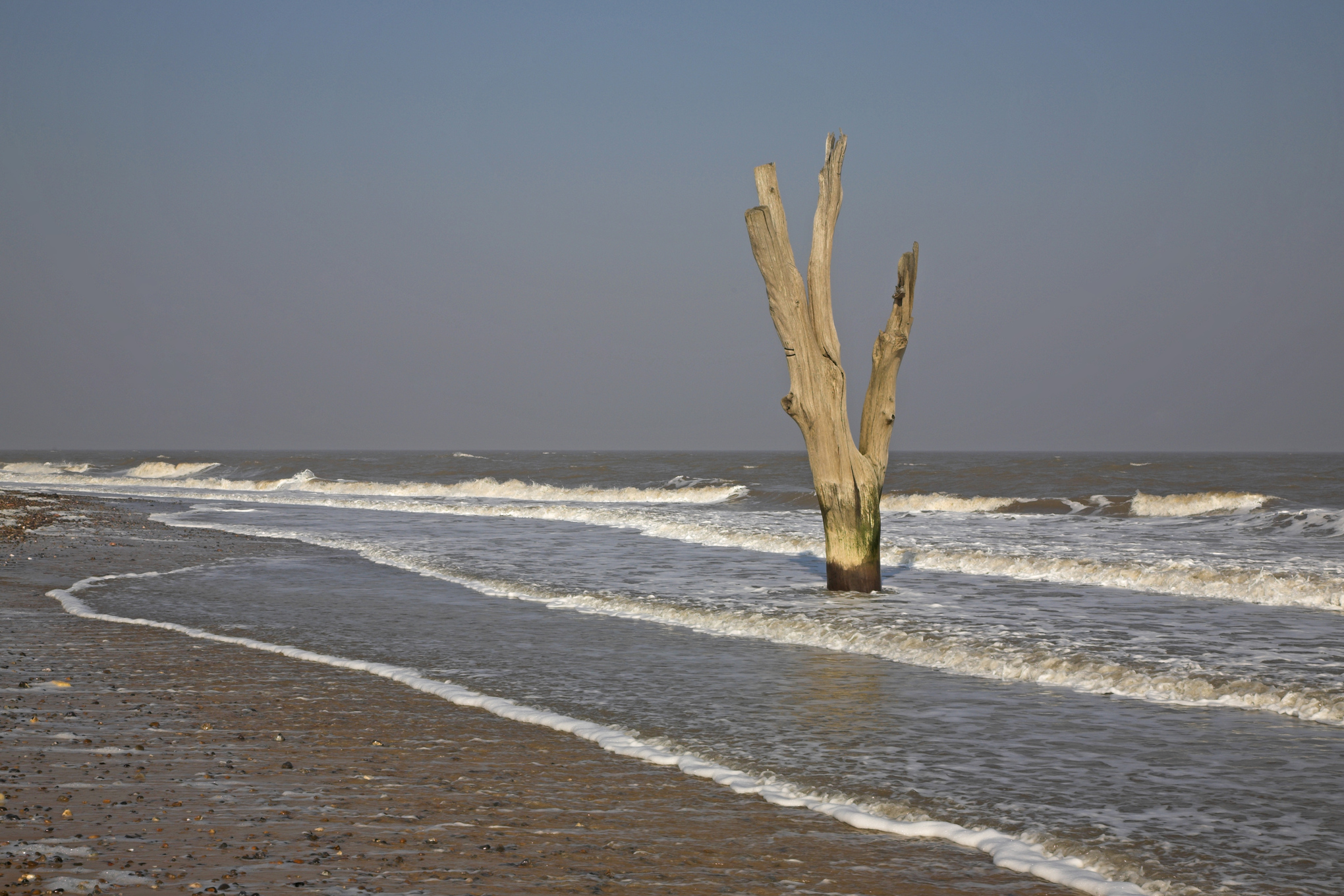 Obviously not every coastal city can retreat in the face of rising sea levels. We can't just pack up and move New York City or Boston.

So highly populated areas will have to build defenses. That includes dikes, levees and bulkheads to protect against storm surges and flooding. In some areas, it will mean pumping sand to replenish beaches that are receding. In other areas, roads and buildings will need to be elevated. That's all expected to cost billions of dollars per year.

For some less-populated coastal areas, however, hardening the shoreline won't be worth it. One 1999 study surveyed 30 coastal areas around the United States and estimated that for one-third of them, retreat or partial retreat was a more cost-effective response to sea-level rise. (That said, no one's yet done a rigorous analysis of what towns are worth defending and what not.)

What's more, building seawalls can frequently do a fair bit of damage to coastal ecosystems — for one, they can destroy crucial wetlands by preventing them from migrating inland.

These wetlands are often invaluable: they help protect coasts from storms, shield freshwater supplies from the encroaching oceans, and underpin the food chain for nearly two-thirds of US commercial fisheries in the Atlantic. Studies have found that some wetlands will be able to survive by migrating inland if sea levels rise relatively slowly (at a rate of 7 millimeters per year or less) — but only if those wetlands have some place to go.

Hence the case for managed retreat. "For many coastal areas," Kousky notes, "retreat will be either preferred or required." 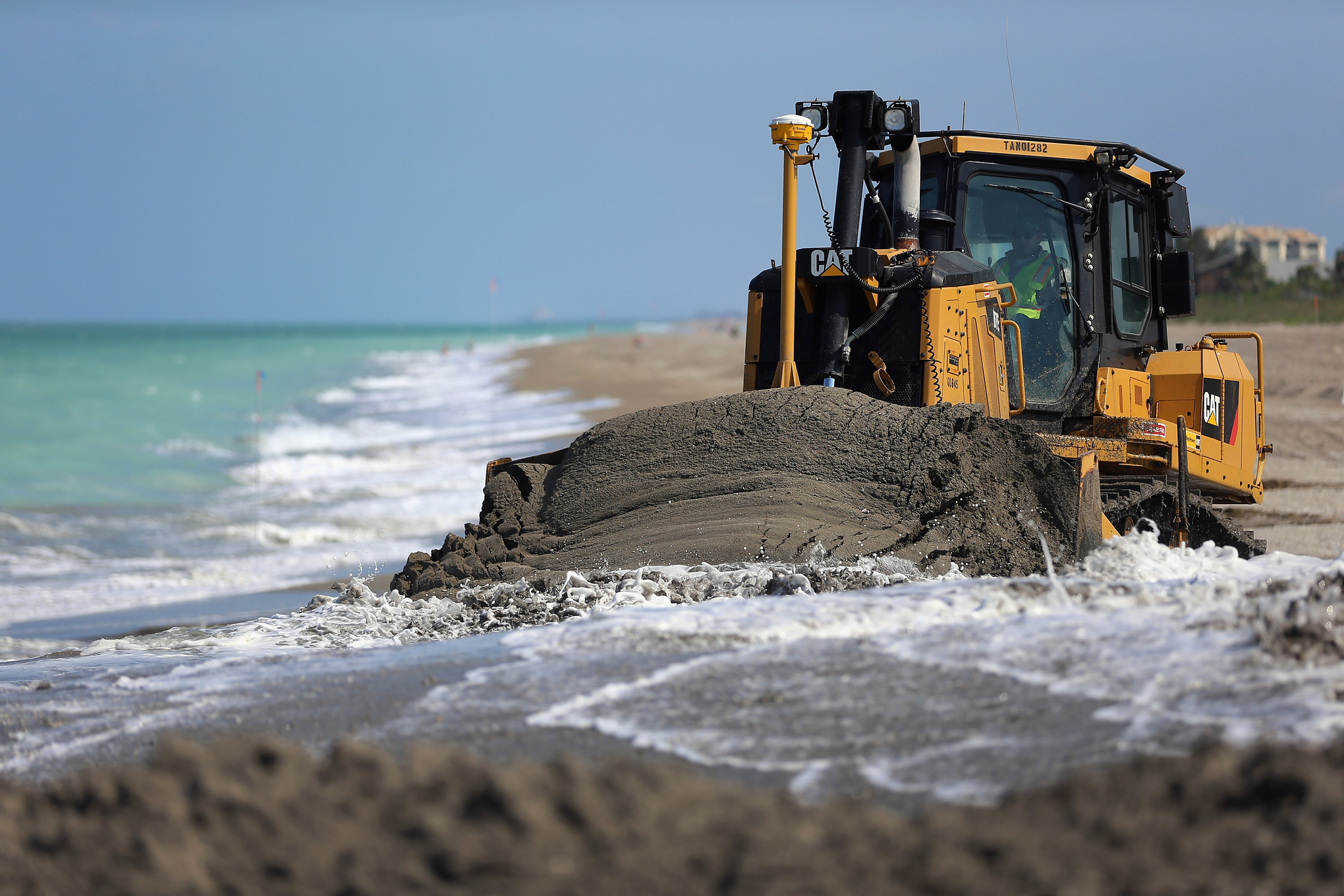 A bulldozer is used to push sand from a discharge pipe into place during a federally funded shore protection project by Great Lakes Dredge and Dock on May 17, 2013 in Fort Pierce, Florida. (Joe Raedle/Getty Images)

Kousky's paper lists a variety of ways that communities could retreat from the coasts — though most of them are likely to be difficult and controversial:

1) Restricting development in high-risk areas: This is one obvious option — why build in areas that are soon likely to find themselves underwater? One 2009 study noted that, based on current plants, 60 percent of Atlantic coastal regions that sit less than 3 feet above sea level is set to be developed eventually (see map). Does that make sense? 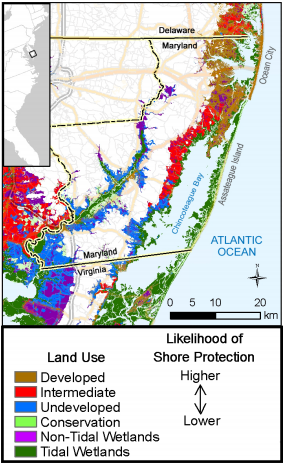 Land use and likelihood of shore protection along the Maryland coast. This map shows lands within 5 m above spring high water. (Titus et al, 2009)

The drawback, of course, is that restricting development is costly and controversial — and it can be difficult to calculate when it's worth doing.

What's more, many coastal states haven't yet started to think this through. New York's Sea Level Rise task force has recommended drawing up maps to identify the parts of New York most at risk from sea-level rise. By contrast, North Carolina's legislature has banned state agencies from taking climate projections for sea-level rise into account.

2) Better information: It would also help if individuals and homeowners had better information about how the rising oceans will actually affect different areas. It's often tough to visualize how a foot or two of sea-level rise might influence things like storm surges or flooding. Right now, detailed maps like these aren't widely available (though the National Oceanic and Atmospheric Administration is working on one — and Climate Central has some handy maps here).

3) Moving public infrastructure: Meanwhile, a great deal of public infrastructure will have to move inland — though this isn't cheap. Kousky notes that San Francisco is currently moving a highway and parking lot inland, along with various conservation measures — but at a cost of some $350 million. (The argument in favor is that inaction would be even pricier.) Likewise, NASA is planning to move some of its coastal facilities and launch pads inland.

4) Dealing with private property rights: The trickiest part is how to deal with existing private houses. One possibility would be to leave their fates up to the market — as sea levels rise, property values will plummet and people will naturally move inland.

There are two problems with that. For one, the United States doesn't currently leave these sorts of development decisions entirely to "the market." Governments at all levels play a hand in promoting coastal development — by, for instance, funding projects to harden the shoreline or by subsidizing federal flood insurance. (Congress tried to pare back those flood insurance subsidies in 2012 but then reversed the move after a widespread outcry.)

And even if these subsidies vanished tomorrow, it may not always be ideal to let people dot the coast with private seawalls at will — since that can increase coastal erosion or damage wetlands that offer broad public benefits.

One proposed idea here are "rolling easements" — a conservation policy in which private property is transferred to the public as sea levels rise, allowing wetlands to migrate inland. Kousky notes that Texas has experimented with policies like this but they're controversial — and have been challenged in courts.

5) Using natural disasters to relocate inland: Kousky notes that local communities could think a lot more broadly about how and when to rebuild after hurricanes, floods, and other coastal disasters. After Hurricane Sandy, for instance, New Jersey offered to buy out some 1,300 flood-damaged homes in high-risk areas (at a cost of up to $300 million). The downside? This tends to be risky, and not everyone wants to leave.

In the end, the paper is pretty clear that none of these options will be simple. Kousky notes that sea-level rise is a "wicked problem" that's not easily amenable to policy solutions. But right now, relatively few states are even thinking seriously about the problem — which means that simply broaching the topic is a good first step.