Share All sharing options for: For $23,215, you could buy a Jeep — or health coverage for one family

The bad news: health insurance for a family of four costs just about as much as a new car.

The good news: prices are rising slower, keeping the price more in the range of Civic rather than a Cadillac.

It costs an average of $23,215 to cover a family of four in employer-sponsored health insurance, a new analysis from actuarial firm Milliman found. This includes what the family pays for their monthly premium, what the employer contributes and any out-of-pocket costs incurred over the course of the year. 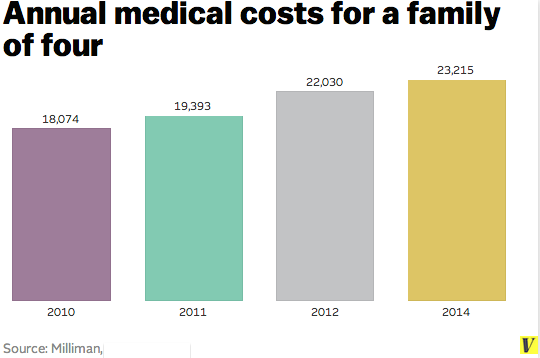 That's more than double the cost a decade ago when, in 2004, coverage cost $11,192. Employers cover just over half the costs, paying for 56 percent of the average premium in 2014. Workers contributed $5,908, on average, in premium s and another $3,787 on out-of-pocket costs when they turned up at the doctor.

But there's also a silver-lining to these numbers. Milliman's data shows that, while health costs continue to grow, they're growing at a slower rate than they used to. Premiums increased at a slower rate between 2013 and 2014, than they did in the past four years. 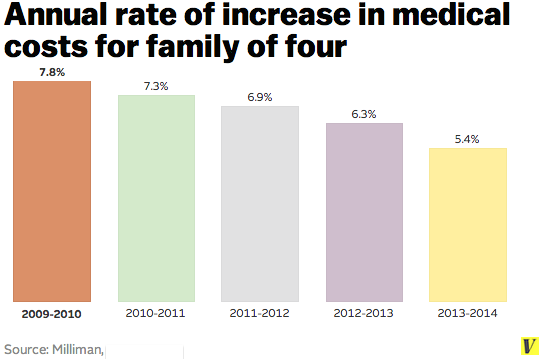 It's possible though, that employees aren't noticing this slowdown: the Milliman report shows that, while overall cost growth is slowing, what the employer pays for coverage is slowing much faster than what workers pay. In other words: companies are asking workers to take on an increasingly large share of their insurance bills. Which means that some of the slowdown isn't trickling down to what families see themselves paying for coverage in 2014.