That time Henry Kissinger was a literal comic book villain

Share All sharing options for: That time Henry Kissinger was a literal comic book villain

In 1976, then-Secretary of State Henry Kissinger was a comic book villain. That's not a metaphor for his penchant for international scheming. Kissinger was featured in a Fantastic Four comic that year — and he sided with the bad guys.

In this 1976 issue of the aptly titled Supervillain Team-Up, the Fantastic Four are battling arch-nemesis Dr. Doom. After fighting an army of robots and even the brainwashed superhero Namor, the heroes break into Doom's castle in Latveria (a fictional European country he runs). They're about to lay down one of those traditional super-hero smackdowns, but the Four are stopped by an enemy they can't fight with fists — Henry Kissinger: 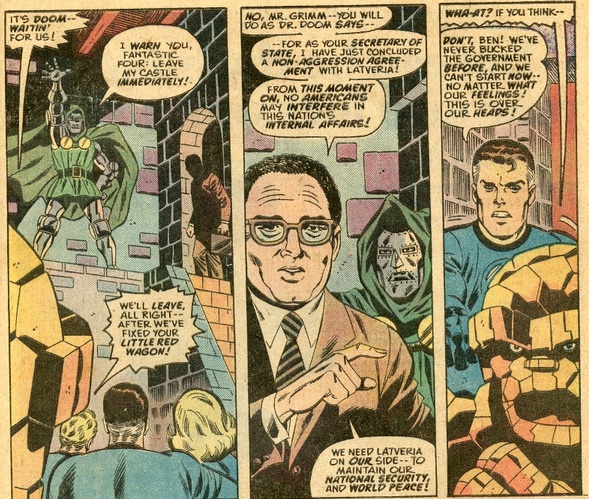 Yep. Henry Kissinger allied the United States with Latveria, a super-villain-run puppet state, in the name of American "national security."

It's actually a pretty apt satire of Kissinger's policy agenda. The comic was recently dredged up by Gary Bass, a Princeton scholar whose widely acclaimed new book documented evidence that Kissinger was complicit in Pakistan's 1971 genocide in Bangladesh. At the time, Kissinger was in the middle of his ultimately successful campaign to open up relations between the US and China. Kissinger was using Pakistan as a go-between for communications, and didn't want to jeopardize what he saw as critical cooperation by pressuring the Pakistanis to stop killing Bengalis en masse. Bass sees things somewhat differently.

So Kissinger's guest spot in Fantastic Four comic isn't just a cute piece of trivia. It's a neat testament to the way that comic books and other fantasy worlds can put some moral truths about our world in appropriately stark terms.