Republicans and Democrats just wrote some actual legislation together

Share All sharing options for: Republicans and Democrats just wrote some actual legislation together

A bipartisan, House-Senate committee of Republicans and Democrats announced a deal today to overhaul how job training programs are organized.

You read that right: House Republicans and Senate Democrats got together and wrote an 800-page piece of legislation that both sides could agree on. That's vanishingly rare in today's polarized Congress.

The agreement doesn't feature any dramatic new programs to help the unemployed. Its focus is on making federal job training programs more efficient and accountable. In other words: it's hard to tell how much would actually change for displaced workers if the bill becomes law.

But it's noteworthy that the deal happened at all. The workforce training bill is handled by the same Senate and House committees that write education legislation. Those committees haven't been able to reach common ground on a big bill since Republicans took back the House of Representatives in 2010.

Every piece of major education legislation is overdue for renewal in Congress. (The workforce bill, with its focus on educating adults, workers, dropouts and people with disabilities, is considered both education and labor policy.)

Workforce training isn't a high-profile, polarizing issue. But consensus wasn't a given; last summer, Republican and Democratic proposals on the job training bill were so far apart that House Democrats staged a walkout when the two sides met to vote on the Republican plan.

The bipartisan deal would overhaul the Workforce Investment Act, passed in 1998 and not updated since then. It would kill 15 job-training programs in order to somewhat streamline the federal system: 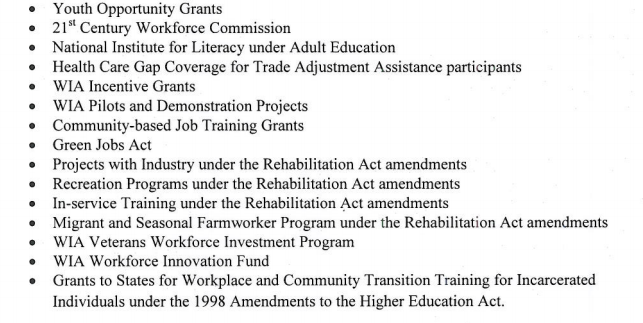 It would also require states to do more to coordinate services to unemployed people, displaced workers, and high school dropouts. It requires the Labor Secretary to study ways to get women into high-paying jobs where they've been historically underrepresented. And it tries to cut down some of the bureaucracy involved in administering state and local programs for the unemployed.

Federal job training is renowned as a thicket of conflicting programs established through different pieces of legislation and housed in different agencies. Vice President Joe Biden is leading a review of programs that's expected to conclude sometime this summer.