Share All sharing options for: GM has already recalled more cars this year than it sold all last year

Car companies are on pace to issue a record number of safety recalls for US vehicles this year.

It's only May, but automakers have recalled 22.3 million vehicles in the United States. That's already more than last year — and it's on pace to shatter the previous record set in 2000: 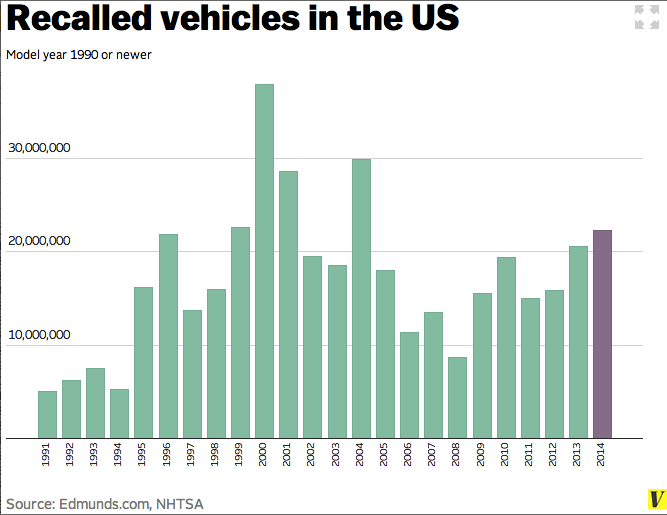 The biggest story here — by far — is General Motors, which has already recalled 13.6 million vehicles in the United States this year (and 15.4 million cars globally).

That means GM has now recalled more cars for safety problems this year than it sold all last year (9.7 million).

The problems began earlier this year, when GM recalled 2.6 million vehicles over a faulty ignition switch that has been linked to at least 32 crashes and 13 deaths since 2006. The company quickly faced a congressional investigation and criminal probe for not recalling the vehicles earlier. This month, GM was fined $35 million by regulators for not recalling the vehicles sooner — the maximum possible penalty.

That crackdown, in turn, seems to have made GM even quicker to recall other vehicles for unrelated problems, no matter how serious. On May 20, the company recalled another 2.4 million vehicles because of potential flaws in cables and plastic clips.

That's not cheap — when an auto company recalls a vehicle model, it promises to pay to fix the problem (and, at times, loan replacement cars to the owners during repairs). GM is already planning to take a $1.7 billion loss on recalls so far this year.

And GM's problems seem to have spurred other companies to issue their own recalls this year: There was a big April 9 recall by Toyota, which called back 1.8 million US vehicles over problems with airbags and seat rails. Plus Ford, Volkswagen, Nissan, and Honda.

Automakers typically recall cars or trucks when they've identified a defect that could jeopardize public safety.

The decision to recall a vehicle isn't always clear-cut

That's not always a simple decision, though. Many problems are obvious hazards — like faulty airbags. Other defects, however, are less clear-cut. What if a car has windshield wipers that, under very rare conditions, might become improperly torqued? (Toyota faced this situation last year.) Should the company issue a costly recall? Or let it slide?

Different automakers make different calculations in those close-call situations. But since the 1990s, a growing number of companies have been erring on the side of issuing a recall — even for seemingly minor problems.

Here's a chart showing that recall campaigns have been rising since 1990 (though, as the chart above shows, the actual number of vehicles affected by each campaign can vary): 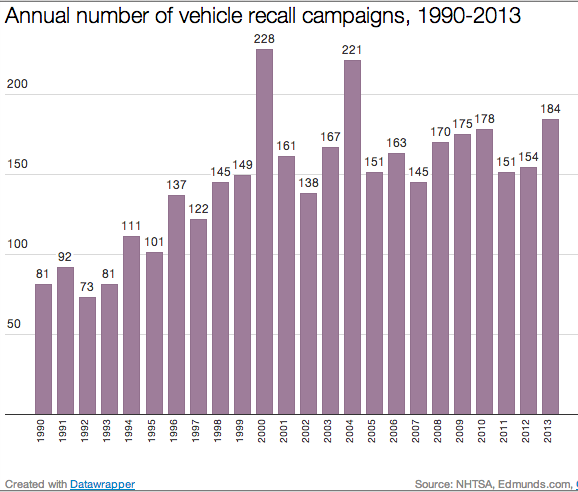 One reason: the federal TREAD Act, passed in 2000, requires automakers to promptly alert regulators about any potential problems rather than waiting for customer complaints. (Most recalls are voluntary, though an increasing number are initiated by regulators.)

Another factor: in recent years, US regulators have been more assertive about treating car safety issues as potential criminal matters. In March 2014, Toyota had to pay $1.2 billion to the Justice Department after allegedly concealing evidence about a deadly unintended-acceleration problem in its vehicles. And GM is facing its own criminal probes.

Those crackdowns may have helped spur the recent recall frenzy. "Given the sensitivity around auto safety in the last five years, it should be no surprise that we see as many recalls as we do today," Jessica Caldwell, an analyst at Edmunds.com, noted back in April.

But does that mean cars are less safe? 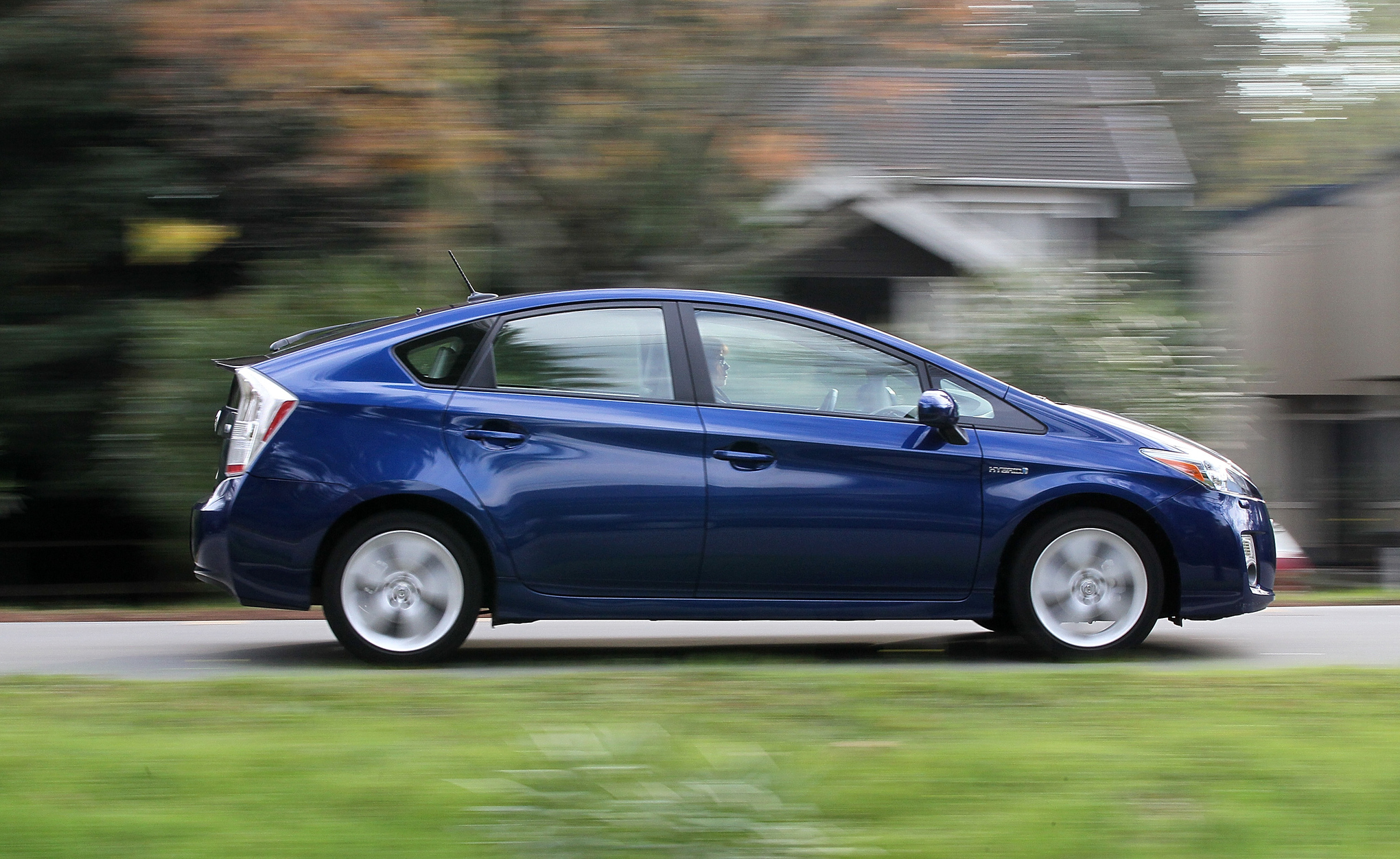 Toyota recalled 650,000 Toyota Prius hybrids in 2010 to repair cooling pumps that could fail and cause the vehicle to overheat and lose power. Justin Sullivan/Getty Images

Another question is whether auto recalls are increasing because the cars themselves are becoming more unreliable.

At first glance, this seems unlikely. After all, consumer surveys from J.D. Power and Associates have found that US cars actually became more dependable between 1998 and 2012.

But there are subtle twists that might affect the number of recalls. In an April interview, Karl Brauer, a senior analyst at Kelley Blue Book, pointed out that auto companies have been trying to cut costs in recent years by using the same parts across multiple vehicles.

The downside? If a particular part is faulty, then the problem will affect many more models. After Toyota had to recall 5.3 million vehicles in 2013, it blamed the fact that a single defective part had been used in a number of different popular models. And, in 2013, the same defective airbag used by BMW, GM, and Toyota forced all three automakers to issue recalls. 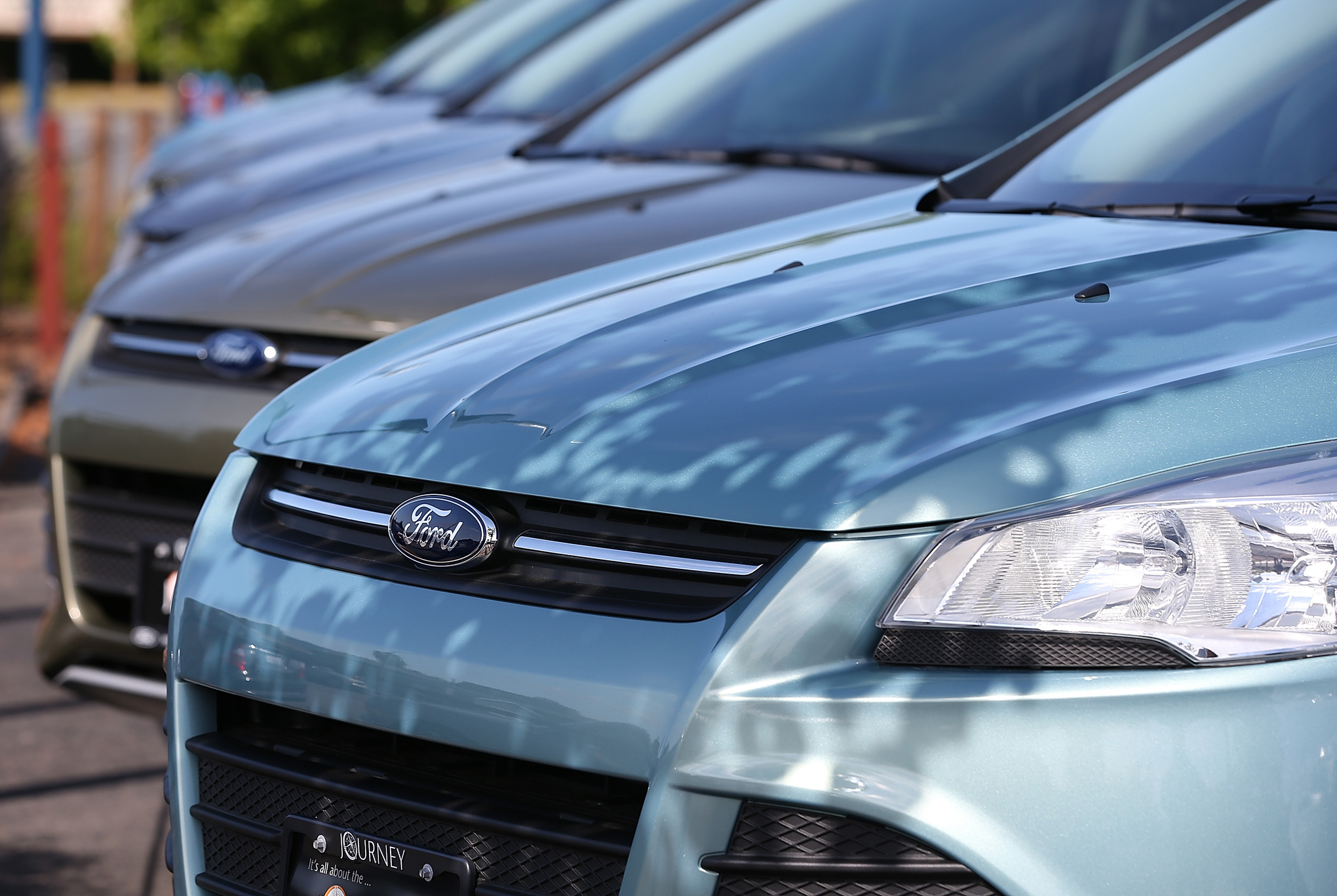 Ford announced the recall of over 400,000 2013 models of cars and SUVs, including the Fusion, Escape and Taurus models for a possible fuel tank leak that could cause fires. Justin Sullivan/Getty Images.

Here's another important fact about recalls: they're never perfect. Usually, auto makers send out a recall notice to car dealerships and hope that about 70 percent of drivers bring in their vehicles for repairs. 70 percent is considered a good rate, analysts say.

Why only 70 percent? Plenty of drivers never hear about the recall in the first place — especially if they've bought the car second- or third-hand. (The notice often goes to the original owner.) And other drivers can't be bothered to bring their car in for repairs. "Usually about one-third of cars will never get addressed," says Brauer.

That's one reason why it was a big deal that GM waited so long to recall its vehicles over the faulty ignition switch — as the years go by, people sell or trade in their defective cars and it becomes much harder for companies to identify the owners. (GM, for its part, says that it's currently poring through registration data to try to find and notify as many owners as possible.)

Further reading: Popular Mechanics has a nice list of the five most notorious car recall campaigns of all time.