The entire basis for Obama's drone strategy may be wrong

Share All sharing options for: The entire basis for Obama's drone strategy may be wrong

The basic premise of the Obama Administration's drone program is that decapitation, the killing of a terrorist organization's top leadership, works. Killing al-Qaeda's leadership should, in theory, limit the organization's ability to plot attacks on the US and its allies.

But what if that's not true? That's the core finding of a just-published study in the prestigious journal International Security. In it, Georgia Tech professor Jenna Jordan takes a look at the history of targeting terrorist leaders and draws lessons for the fight against al-Qaeda. According to Jordan, believing that targeted killing can actually weaken al-Qaeda means assuming al-Qaeda depends on a group of charismatic leaders. But that's wrong, and that mistaken assumption has led the Obama Administration to pursue a strategy centered on targeting al-Qaeda's leadership with drones when it'd really be better to cut down on targeted killings altogether.

Define al-Qaeda by its bureaucracy, not its leaders

There are basically two ways to run a terrorist group. "Charismatic" groups have one inspirational, powerful leader whose skills and leadership are essential to the group's operations. Think Joseph Kony and the Lord's Resistance Army.

By contrast, "bureaucratic" groups have something resembling an org chart. They may be loosely organized at the lower levels, but there's something like a command structure, division of labor, clear assignment of responsibilities, and the like. Violent extremism run by MBAs, essentially.

Jordan makes a compelling case that the Obama administration is treating al-Qaeda as a charismatic group — hence the big focus on killing its top leaders, which means using drones — when she argues that is in fact a bureaucratic group, for which targeting individual leaders is a lot less useful.

US government assessments and declassified al-Qaeda documents show that these bylaws actually matter. al-Qaeda central in Pakistan exercises some real control over its affiliate groups in other places targeted by drone strikes like Yemen and Somalia. Moreover, those groups have their own internal hierarchies and rules. This is all strong evidence that the group is run bureaucratically, which makes it more able to absorb the loss of individual senior leaders.

That bureaucracy is why al-Qaeda isn't falling apart

The more bureaucratized a terrorist group is, the less individual leaders matter. Think of them like big corporations. Companies don't fall apart when they lose their CEO or CFO; other people are being trained to do that job and there are institutional mechanisms preserving the knowledge the CEO brought to the table. Also, rules create clear lines of succession, so destabilizing struggles over who gets to take over the group's leadership become less likely. This theory, that bureaucratization breeds stability in the face of leadership changes, is backed up by a wealth of statistical studies of non-terrorist organizations.

Jordan also brings data specific to al-Qaeda like organizations. A prior study of hers found that older terrorist groups were much more likely to survive decapitation strikes. The reason, according to Jordan, is that older terrorist organizations also tended to be more bureaucratic. That makes sense: any organization that's been around for a while is likely to see some personnel turnover, so they'll need to develop procedures for dealing with that. Indeed, long-lasting militant groups like Peru's Shining Path or Hamas in the Palestinian territories tend to be pretty bureaucratic.

Jordan's theory explains why it never seems to make a difference when the US government announces that it's killed an al-Qaeda #2 or #3. This happens pretty often: as The Onion once put it, "Eighty percent of al-Qaeda no. 2's now dead." Yet somehow al-Qaeda's core leadership has survived and remained relevant.

The statistical evidence, once again, backs her claim up. Jordan separated out the drone strikes that killed al-Qaeda leadership in Pakistan, Yemen, or Somalia, and compared them to overall patterns of al-Qaeda violence. Here's a chart of the times that an al-Qaeda leader was killed, by drone or otherwise: 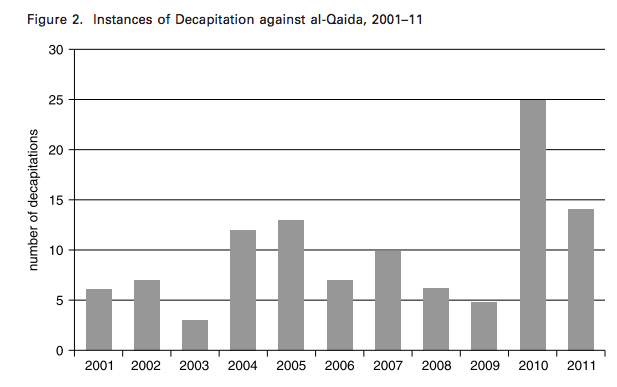 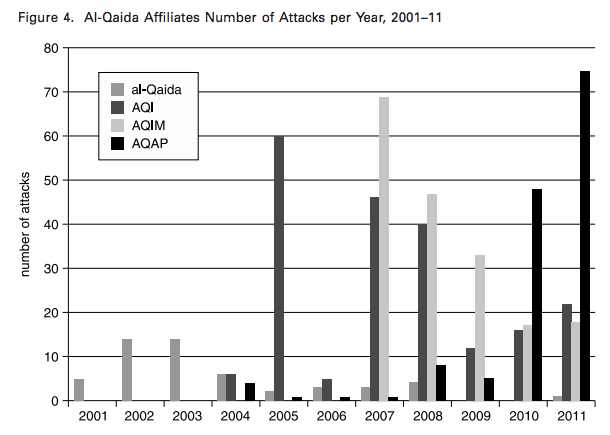 If true, this is a damning indictment of Obama's targeted killing policy

There are weaknesses in Jordan's paper. Her argument that al-Qaeda is broadly popular in the Muslim world, for instance, is totally uncompelling. The data presented is circumstantial, not conclusive: Jordan doesn't show a direct correlation between terrorist bureaucracy and resilience in the face of decapitation strikes, nor does she do a good job separating out the impact of decapitation strikes by regional al-Qaeda branch.

A strategy of killing low-level al-Qaeda operatives is, on its own, not likely to cripple the organization

But nonetheless, her argument should be particularly troubling for the administration and other defenders of the drone program. A strategy of killing low-level al-Qaeda operatives is, on its own, not likely to cripple the organization, given that it's proven to be pretty good at recruiting replacement fighters. The case for the drone program, at its heart, is that killing significant numbers of underlings AND a small number of high-level leaders is severely weakening the group's operating ability.

Jordan's study suggests that al-Qaeda just isn't the kind of group that can be beaten that way. And the burden of proof here is on the government: the drone program kills people, including significant numbers of innocent people. There needs to be either strong theoretical arguments or statistical evidence that al-Qaeda is vulnerable to decapitation strikes to justify those costs. While there is evidence al-Qaeda is getting weaker, Jordan's work provides good reason to believe the drone program isn't the cause. What's the administration's response?