Share All sharing options for: Meet the man who spent a year and a half of his life explaining the best episode of the West Wing ever made

A screenshot of one of White's many detailed analyses.

Jon White, a Seattle-based visual designer, has created perhaps the most detailed and impressive tribute to a single episode of television of all time.

White is the creator of Seventeen People, an essay/website/visualization about The West Wing episode "17 People" (season 2, episode 18), which White believes is the single greatest episode of television ever created.  White's site — featuring tons of cartoon illustrations and diagrams chronicling details as minute as which foods White House associate counsel Ainsley Hayes (Emily Procter) expresses a desire to eat in the episode — took him around a year and a half to build.

And he doesn't even like The West Wing all that much.

I caught up with White about the site, why he built it, and his feelings about the show as a whole.

Alex Abad-Santos: How did this project get started? When did you decide you were going to start "Seventeen People?"

Jon White: I've been doing my best creative head-clearing during my walks toward, my return walks from, and my time inside Seattle's august Fiddler's Inn. Two Novembers ago was a stressful time for me, and during one of these walks, when all that seemed cathartic was getting home to the warming glow of "17 People," I thought — purely as a joke, and fueled by a Rogue Nitro Stout — that it'd be funny to spend maybe 8 hours, tops, whipping up a small infographic praising its merits. I pulled out my phone and bought the domain name. Then the idea … festered.

Alex: Can you, for West Wing newbies, briefly explain "17 people"?

Jon: Gladly. "17 People" is the 40th episode of a show about White House staffers who wear pagers, that, inexplicably, both Lawrence O'Donnell and Peggy Noonan script-advised on. It's the job of this episode to begin the plot arc that dominates the remainder of its season (that is, Martin Sheen having to admit to a Secret Thing). Is it better than "Two Cathedrals" (its season's critically hailed finale)? Probably, yes. Is it better than The Godfather plus Citizen Kane? Undoubtedly.

Alex: How long did it take you to complete the project? I mean, is it complete? You could always add more, I guess. 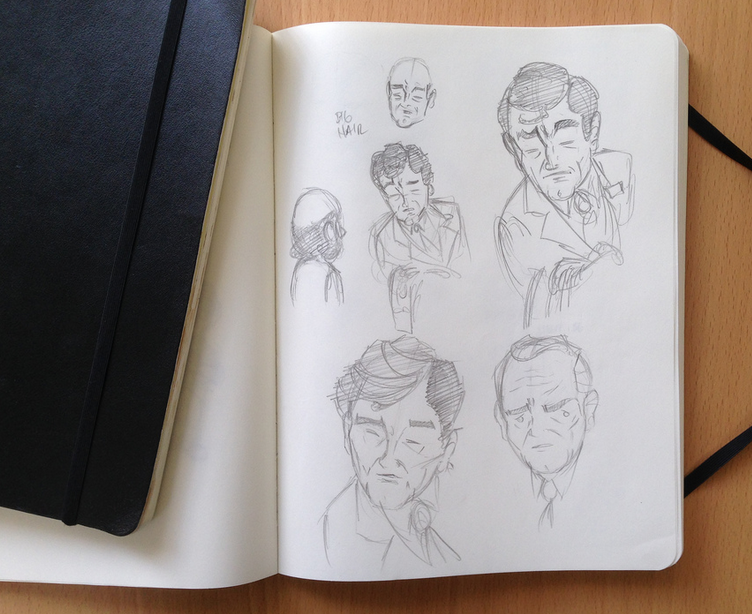 One of Jon White's doodles. Photo by: Jon White

Jon: From initial doodle to launch, a year-and-a-half. [White has uploaded a Flickr album of his process/ sketches, which you can find here.]

But of that, only the last few months had me reliably, actively spending my nights and weekends on it. Besides fundamentally doubting its appeal —really, this is a micro-micro-niche — what really slowed me down was just the typical nights and weekends motivational hurdle any of us have. Which, in my case, was exacerbated because my day job so closely mimics what I do for fun (designing, coding). (Incidentally, this is what's pragmatically elegant about running: you can use it as a hack to mode-shift between two similar tasks in the same day. Make web sites at work, flail around half-naked like a lunatic, then make web sites at home.)

As for "complete" — that's tricky. There was something I didn't include because it wasn't my idea, but it's brilliant. Years ago, someone in the AV Club comments pointed out Leo's blocking in this episode, and how much of a storytelling function that serves. And by God, once you're looking for it, you can't unsee it. I'd have felt like a jerk for stealing that insight (though the temptation was palpable).

Jon: That's a great question, and I wish I had any way of estimating an answer. I would have first seen it probably 10 years ago in college, when my friends loaned me their precious Seasons 1 and 2 box sets. When it came to this project, though, my viewings were piecemeal and fragmented across a variety of media. I had the DVDs, and I had that dogeared paperback script volume, but I also kept a video copy on the iPad in case I was working offline at Fiddler's — and, of course, had Netflix for desktop use. Quick Netflix timeline scrubbing became invaluable later on, because I'd queue it up for the dumbest, quickest, most trivial references. Toward the end, when I was coloring, I realized that I had no idea what hue Donna's shoes were. Every shot of her — save one, just near the end — was knees up. Using TCP/IP for this was probably not what Vint Cerf had in mind, but lord was it faster than firing up the DVD player.

Alex: To be honest, there's something absolutely beautiful about Seventeen People — the thought behind it, the visualizations, the different diagrams, etc. But there's also something slightly obsessive/mad-scientist about it. What say you?

Jon: "Flattered," on both counts.

Alex: Why do you love The West Wing so much?

Jon: Sadly, my answer's as anticlimactic as it is #slatepitch contrarian: I don't!

I mean, yes, I used to. But as my project went on, it almost became for me a kind of swan song to a series that, now, is just frustrating ("17 People" excepted). The entire show was unabashedly a love letter to the best-imaginable take on Clintonian centrism/"triangulation", and, I guess, romanticizing that narrative had some appeal in the '90s and early-'00s.

But when it's 2014, and we're surrounded by the visceral effects of what happens when that attitude becomes actual policy — the Democratic Party's approach to banking, regulation, justice, drugs, civil liberties, take your pick — it's just exhausting to switch back to when that all seemed innocuous. Hell, "17 People" itself aired just months after Clinton signed the Commodity Futures Modernization Act. It's hard to retain the fantasy.

Jon: I'm afraid I have to get pedantic: While "17 People" is, unambiguously, my favorite episode across all of television, The West Wing isn't my favorite series. If pressed — and assuming we can pretend it only lasted four seasons — I could probably justify ranking it as high as my fourth-favorite show. It'd feel like sacrilege to mention it above Connections / The Day The Universe Changed, Police Squad!, or Mystery Science Theater 3000. And even at that point, I'd have to tie-wrestle The West Wing against Beakman's World. This is tough.

Alex: Have you thought about watching Game of Thrones?

Jon: No. Insofar as I have any capacity for keeping track of an ensemble of arcade and convoluted names, dates, and events, it's consumed by my fandom for Rick Perlstein. No orcs or hobbits or thrones or sex, but it's meaty all the same.

Alex: Was there any point when you thought you were gonna give up on your site/project?

Jon: Jesus, constantly. Again, this took me a year and a half from conception to completion, which is ridiculous. The overwhelming majority of that time was spent doing anything else, which is less a validation of the worth of those other things than it is an indictment of my creative certainty. "Welp, this is pretty stupid," I'd say, often. In fact, my big kick to actually see it through was when I demo'd a rough mockup to my friend over coffee. "Y'know, people are going to think you're insane," he gently offered. Never have I felt so instantly affirmed or recharged.

Can you elaborate on the "food that Ainsley anticipates eating"?

Oh, sure. Emily Procter's character talks endlessly about food in this episode. Actually, she receives a Quasi-Manic Pixie Dream Girl Quirk TraitTM in every episode she's in. Could be Gilbert & Sullivan, could be anything. It's a Sorkin thing.