Share All sharing options for: The American dream is failing black college graduates

A new study of college graduates from the Center for Economic and Policy Research looks at unemployment and underemployment for 22- to 27-year-olds. These are students with bachelor's degrees who graduated into a weak job market, and their unemployment numbers show it: about 6 percent want a job and don't have one. 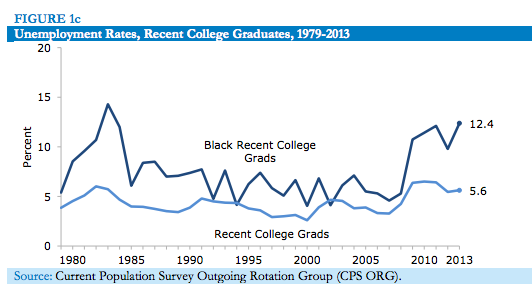 The survey found high underemployment — working in a job that doesn't typically require a college degree — for all graduates, but again, even higher underemployment for black college graduates: 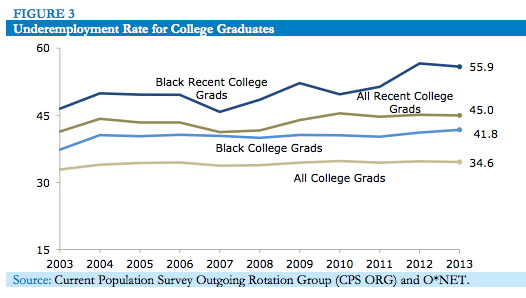 There are some reasons to be skeptical on the underemployment figures. Whether the Bureau of Labor Statistics (which finds similar levels of underemployment) understates the need for a college degree is the subject of intense economic debate. If the US were really overproducing college graduates, some argue, they wouldn't command such a wage premium versus high school graduates.

The study points out a few possible reasons for the disparity, including that graduates with typical "black" names face a difficult time in the labor market. But there are other explanations, too: research has shown black college students are much less likely to attend prestigious or highly selective colleges, which might also put them at a disadvantage.