How one contaminated cow can infect millions of pounds of hamburgers

Share All sharing options for: How one contaminated cow can infect millions of pounds of hamburgers

On Monday, a meat-packing firm recalled 1.8 million pounds of ground beef because of possible contamination from a deadly strain of E. coli. So far, the beef, which had been shipped out across the country, has been linked to 11 illnesses in four states.

When something goes wrong, it can affect more food than ever before

So how did that E. coli spread so widely and so quickly before anyone caught it? 1.8 million pounds of beef is, after all, a potential 7.2 million quarter-pounder burgers. That's thousands upon thousands of cows.

Investigations are still underway about what exactly went on at this particular meat-packing operation, Detroit-based Wolverine Packing Company. It's still too early to say what specifically caused this outbreak.

But it's hardly the first time a contamination this large has occurred in the United States — in recent decades, they've become surprisingly common. In 2011, for instance, cantaloupes with Listeria monocytogenes bacteria spread across 28 states and killed 33 people. And since 2013, an antibiotic-resistant strain of Salmonella on raw chicken has sickened 524 people (and counting) across 25 states.

And E. coli is a problem, too. Ever since a deadly outbreak in 1994, the USDA has banned the sale of ground beef containing the dangerous O157:H7 E. coli strain. But thousands of Americans still end up in the hospital each year because of the pathogen.

So what's driving these massive food-contamination outbreaks? One possibility is that inspectors are simply getting better at detecting and tracking cases when they do occur. But many experts argue these big outbreaks are one unintended side effect of the centralization of the food industry.

"Because of the consolidation in the industry, a single plant can cause much more widespread illnesses and contamination problems than may have been the case 40 years ago," Erik Olson, Senior Strategic Director for Health and Food at the Natural Resources Defense Council, told me.

The downsides of centralization

There's no question that US agricultural production has been consolidated into fewer and fewer businesses. Since the 1950s, the industrialization of agriculture has allowed large companies to take advantage of economies of scale — producing meat, produce, and grains at lower prices and outcompeting smaller businesses.

four companies slaughter 80% of cattle in the United States

According to the US Department of Agriculture's most recent survey in 2012, about 4 percent of farms in the US are now producing 66 percent of farm products, by value.

That's particularly true for meat. Just four companies slaughter 80 percent of cattle in the United States. (The meat-packing company involved in the current recall isn't one of those big four, however.) And three companies control half of America's chicken, according to Christopher Leonard's new book The Meat Racket.

That industry concentration has, in turn, led to more meat being slaughtered and processed in larger, centralized facilities — since it's more efficient that way. And that, in turn, can make it easier for contamination to spread more widely.

Take beef slaughtering as an example. US red meat production in 2013 was 37 percent higher than it was in 1970, according to the USDA. Yet the number of slaughterhouses has fallen sharply, from 10,000 in 1967 to 3,000 in 2010. More and more cows are being slaughtered in fewer and fewer slaughterhouses: 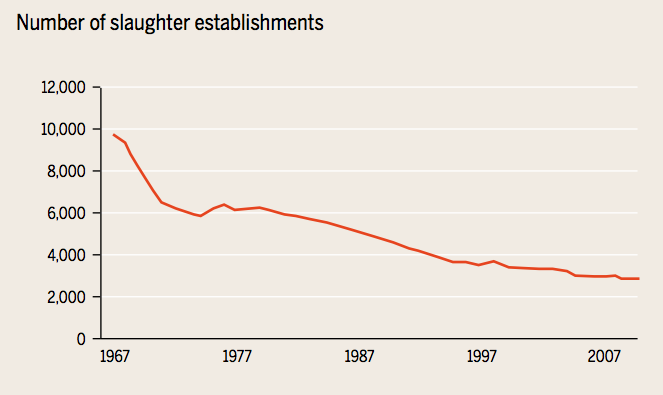 Denny, RCH. "Between the Farm and the Farmer’s Market: Slaughterhouses, Regulations, and Alternative Food Networks" 2012 via Heinrich Böll Foundation/Friends of the Earth Europe "Meat Atlas" 2014.

That means that a single contamination incident — say, a feces-contaminated hide touching a cow carcass — can end up spreading to thousands of animals throughout an assembly line.

This is particularly true for ground meat, which is generally made up of meat scraps from many different animals. And meat grinders can spread bacteria to the inside of a hamburger patty — where the microbes may not get cooked up hot enough to be killed.

Some research has connected centralized production with more frequent outbreaks

Put it all together, and once a problematic microbe enters the food system, it can easily spread far and wide. As The New York Times painstakingly documented in a 2009 story about a different recall, a simple frozen burger can have beef from several different companies, from different states, and even from different countries. (Mixing meat in this way cuts costs by about 25 percent, the Times reported.)

Several research papers suggest that centralized production and large-scale distribution could be leading to more frequent and broader outbreaks. A recent review of multi-state outbreaks co-authored by CDC infectious diseases expert Jeremy Sobel points out that these dynamics in the chicken industry may have contributed to more cases of Salmonella enteritidis, which can also cause illness.

The same dynamics apply to the cattle industry: "This concentration of production and the nature of processing methods result in the commingling of meat form many carcasses and, consequently, increased risk of cross-contamination," Sobel and his co-authors write. "Because large volumes of ground beef are funneled through a limited number of processing facilities, the introduction of E. coli O157:H7 can lead to large volumes of potentially contaminated meat."

And oversight can be limited

For its part, the USDA doesn't have all that much power in its oversight of meat production. For example, companies aren't required to test every lot for  E. coli O157:H7. And there aren't rules for acceptable levels of Salmonella in chicken parts.

What's more, according to the ruling of the Supreme Beef v. USDA case in 2001, the USDA cannot shut an operation down because of repeated failed Salmonella tests. For example, drug-resistant Salmonella outbreaks linked to Foster Farms Brand chicken have been going on for more than a year and sickened 524 people in reported cases (and up to 15,000 in unreported ones). But the affected plants continue to operate.

It's too early to say what, exactly, caused the current outbreak

Now, a crucial caveat here: it's still too early to know exactly what went on in the current outbreak. Meat could have come to the Detroit packing facility already contaminated — or it could have gotten contaminated during processing.

A spokesperson for the Wolverine Packing Company said that it tests all of its products and none had been tested positive for E. coli, according to local news site Mlive.com. Many of those who got sick were eating undercooked hamburgers, which certainly didn't help things, either.

For now, the USDA is continuing to investigate and is encouraging everyone — as always — to cook their burgers to an internal temperature of 160°F.