Solving the mystery of health-care prices could save $100 billion

Share All sharing options for: Solving the mystery of health-care prices could save $100 billion

Health care is the largest American industry where tracking down prices can prove a Herculean task. Charges for medical care are all over the map — and research shows that most hospitals can't even provide a quote for a routine procedure like a hip replacement.

There's a growing movement among insurers and doctors to reduce some of that opacity, and make it easier to learn what everything from a hip replacement to a check-up costs. Three major insurers announced last week plans to build a massive price database.

The hope is these efforts will save  money: when patients actually know what a trip to the doctor costs, the thinking goes, they can be better shoppers. One new policy paper from West Health suggests that increasing price transparency could reduce health care spending by $100 billion over the next decade.

But whether these efforts can work is still really uncertain — and something that policy experts and businesses alike are still trying to understand.

Price transparency efforts shouldn't focus on patients. They should target doctors and policymakers.

Patient-targeted price tools are already widely available and rarely used — one survey found that 98 percent of responding plans reported offering cost calculators, but only two percent of members took advantage of them. Requiring insurers to disclose out-of-pocket price data to all enrollees would only save an estimated $18 billion over a decade, according to the West Health report.

Other players in the health-care world might be better positioned to use pricing information to change the way we pay for and deliver care.

For the most part, patients rely on the expertise of their doctors to decide which tests and treatments to receive — but physicians often don't have information about cost on hand when making recommendations. Requiring electronic health records to show price information could reduce spending by $27 billion over ten years by allowing doctors to factor cost into more nuanced judgment of whether a given service is necessary and appropriate.

The report's most promising proposal — saving an estimated $61 billion over ten years— is the creation of giant databases that would aggregate information about prices, use of health services, and outcomes. The authors recommend that each state operate one of these "all-payer claims databases" (APCDs),  which would collect data from all public and private insurers. Typically, insurers don't share this information with competing plans or the public.

These databases would strip away the mystery of health prices, allowing insurers to develop more cost-conscious plans — which, in turn, would pressure hospitals and physicians to price their services more carefully.

The Health Care Cost Institute, a non-partisan research organization, recently partnered with three of the nation's largest insurers to start building a database like this. HCCI hopes to make data available to patients, insurers, employers, health care providers, and regulators starting in early 2015.

The authors are careful to note that their strategies aren't sufficient to overhaul the American health care system. Price transparency may be necessary to enable other big-impact reforms — like changing the way we pay for care — but alone, transparency won't have a huge impact.

To state the obvious, $100 billion dollars is a lot of money. Health care puts spending on a different scale, though: over ten years, $100 billion is a tiny sliver of projected health spending — we're talking about a fraction of one percent. 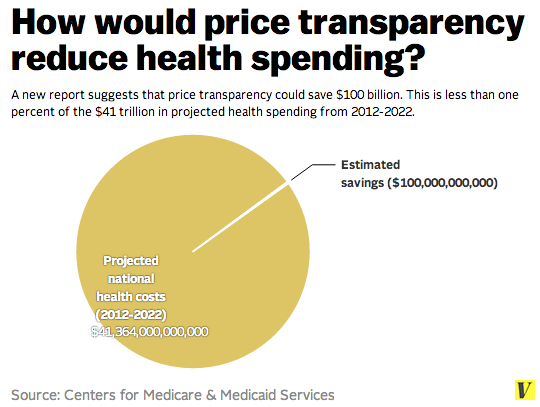 That doesn't mean these reforms aren't worthwhile, but we do need to be realistic about the impact they'll have.

There can be downsides to more transparency

There's a paradoxical effect when you pair price transparency with the way we currently fund health insurance: because patients usually pay a fixed amount and their insurance picks up the rest of the tab, people will often opt for whatever's more expensive, assuming that price is determined by quality. In this way, transparency could actually drive up spending if we don't pair price information with data on quality.

Ashish Jha, a professor at Harvard's School of Public Health, posits the following example: say you wanted to buy a laptop. You have to pay the first $500, but your "computer insurance" will pay for the rest. All you know about your two options is that the computers look the same, but one costs $1,000 and the other costs $2,000. Which do you choose? Since insurance picks up the difference, most people would pick the $2,000 model, assuming it's the better laptop.

That logic — that a higher price means better quality — might work for computers, but it doesn't hold for health care. One study found that high-price hospitals scored worse on objective measures of quality than their lower-priced counterparts.

"We need more data on quality in health care, but we have a long way to go on that. "It's very easy to do price transparency," Jha says. "Then the question becomes whether quality is better enough to justify differences in prices. We're still not good at measuring that or presenting it to patients or physicians in a way that is comprehensible."

The reason to be skeptical about studies like this, Jha says, is that there's a whole history of thoughtful policy analysis that has predicted savings in the health care system — savings that never really accrued.

One notable example is electronic health records: independent studies from Harvard and RAND arrived at similar predictions about how much digitizing medical records would reduce spending. Since the research was careful, done by experts in the field, it became conventional wisdom that EHRs would save money. Those savings have not yet materialized.

There's a whole history of thoughtful policy analysis that has predicted savings in the health care system — savings that never really accrued.

It's always true that research can be conducted carefully and still be wrong; this paper is no different. The authors acknowledge uncertainty in their estimates. "That uncertainty," they write, "is partly because these interventions have not been widely implemented and many have not been carefully evaluated."

Transparency reforms could save $100 billion — or they could save less, or nothing at all. Or maybe transparency will save more money than the authors estimated; we can't know for sure. But it's worth noting that price transparency has other benefits: even without substantial savings, demystifying health care prices would empower patients to make more informed decisions about their care.