8 of the best films of Shakespeare plays

Share All sharing options for: 8 of the best films of Shakespeare plays

Great performances of the Bard's work are now more easily available than ever. Here are some of the very best.

Shakespeare's plays were written to be watched, not read. And nowadays, it's easier than ever to see fantastic performances of the Bard's works — partly thanks to the hundreds of adaptations that exist on film.

It's also, unfortunately, quite easy to end up watching a mediocre Shakespeare adaptation — one with workmanlike direction and performances, or one that botches the text beyond recognition.

But here are eight that deliver on their promises. Some of them showcase incredible lead performances, some feature particularly creative adaptation choices or thematic juxtapositions, and some are just fantastically directed . They each, however, bring something special to the table that complements the text and creates a unique and memorable viewing experience.

The "Chandos portrait" of Shakespeare, painted sometime between 1600 and 1610.

And, yes, that's "complements the text," not substitutes for it. I'll only be listing films using Shakespeare's original text, in English. A line-for-line recitation isn't necessary — the material can be reshuffled, and some of it cut, for the conveniences of film.

But Shakespeare's use of language is what makes him so great — both his wonderful linguistic poetry and turns of phrase, and his expert use of it to dramatize plots and construct characters. Films inspired by Shakespearean plays, like Ran, can certainly be excellent, but without the language, they're no more like the Bard than I to Hercules. And speaking of Hamlet, read on for the first installment ... 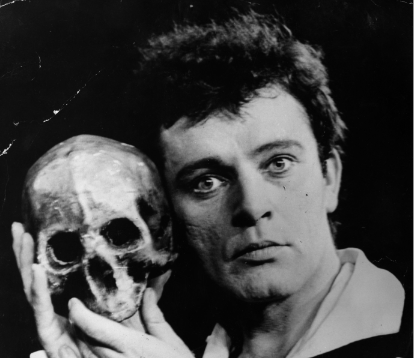 Richard Burton's Hamlet — actually directed by John Gielgud, but now known for its star — is a stage production that merely happened to be filmed. This is fitting, because Gielgud's concept was to do the play in the style of a live rehearsal, as if audiences just happened to walk in. There are no sets or costumes to speak of — the characters wear ordinary clothes, and Burton spends the whole play in a black V-neck sweater. The filmmaking mainly involves making sure the camera follows Burton when he's speaking.

But when Burton does speak, it's clear you're witnessing an astonishingly intense, once-in-a-lifetime performance:

Burton plays Hamlet as a brilliant, bitter, and damaged manic-depressive. One minute he's screaming, snarling, and raging against the injustices of the world. The next, he's possessed with utter melancholy, consumed with the pointlessness of it all, and only able to find mordant humor in the futility of life. When Burton picks up Yorick's skull in Act V, he chuckles at what's become of the fellow of such infinite jest — and later, he throws in that very same chuckle before Hamlet's final line: "The rest is silence."

Many critics consider Chimes at Midnight among the best films Orson Welles ever made, which, considering the competition, is saying something. Welles adapts material from several Shakespeare plays, mostly Henry IV, Parts I and II. But he focuses on (and plays) the roguish Falstaff, whom he identified with and considered "Shakespeare's greatest creation": 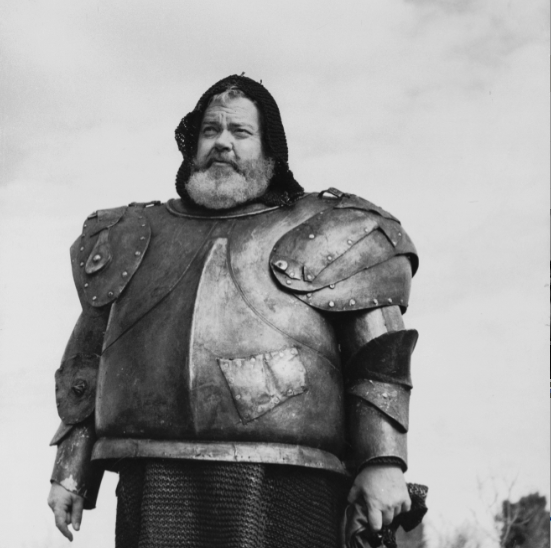 The Henry IV plays are tricky to adapt because they shift among several different moods — from uproarious fun, to the compromises of politics, to the terror of battle, to the melancholic contemplation of death. Welles cuts the source material heavily, dispensing with some of the historical throat-clearing to focus on evoking those moods. What remains is enormously entertaining and moving.

The filmmaking is, of course, spectacular. I'd be remiss if I didn't mention the incredible Battle of Shrewsbury sequence, which was shot on a minuscule budget, but looks decades ahead of its time:

Unlike other filmmakers, Welles doesn't glorify war. He portrays it as a chaotic mess, filled with suffering and death. And, as Shakespeare does, Welles undercuts the buildup to the battle with a Falstaff speech expressing doubt in the warriors' pieties. "Honour pricks me on," Falstaff says, but "Can honor set to a leg? No. Or an arm? No. Or take away the grief of a wound? No ... Who has it? He that died o' Wednesday." He'll have none of it.

Brook's King Lear is bleak, grim, and stark — and one of the most unforgettable Shakespeare adaptations you'll ever see.

The director and his lead actor, Paul Scofield, aren't particularly sympathetic to Lear. As Kenneth Tynan wrote of a previous Scofield performance, his Lear isn't "the majestic ancient, wronged and maddened by his vicious daughters," but rather "an edgy, capricious old man, intensely difficult to live with." The result is a more complex character that reflects Shakespeare's actual text quite well. Here, he savagely curses his eldest daughter with barrenness:

Later, Brook unflinchingly depicts Lear's decline, humiliation, and misery. Scofield gives Lear's famous "Blow, winds, and crack your cheeks" speech flat on his back. We never quite grow to love Lear, but he regains our sympathy in the course of the play, when, mad and homeless, he realizes his own shortcomings and mistakes as a ruler. 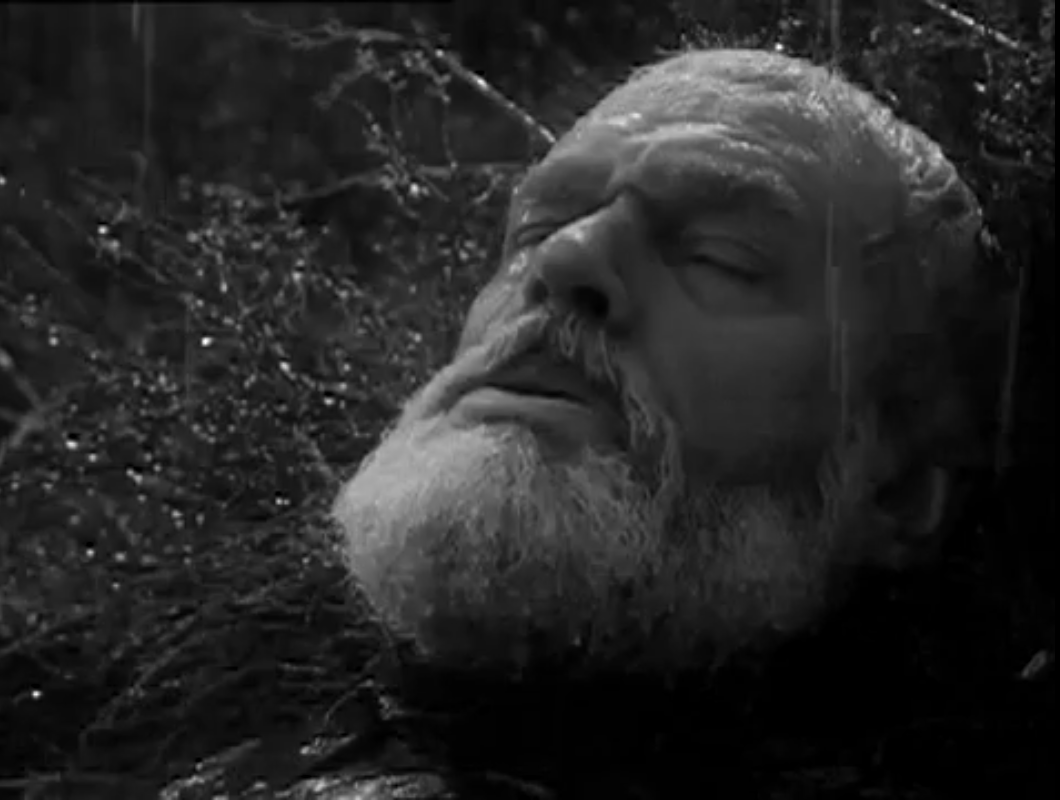 But the play builds to a final-scene tragedy that's incredibly shocking and disturbing even for Shakespeare. Indeed, for nearly 150 years Lear was mainly performed with a tacked-on happy ending written by the poet Nahum Tate. Brook and Scofield embrace the bleakness, leaving the king in a stark, post-apocalyptic landscape, alone with his grief, getting no comfort. It's so moving because it channels our own fears of the worst that can happen in life. "Is this the promised end?" Let's hope not. 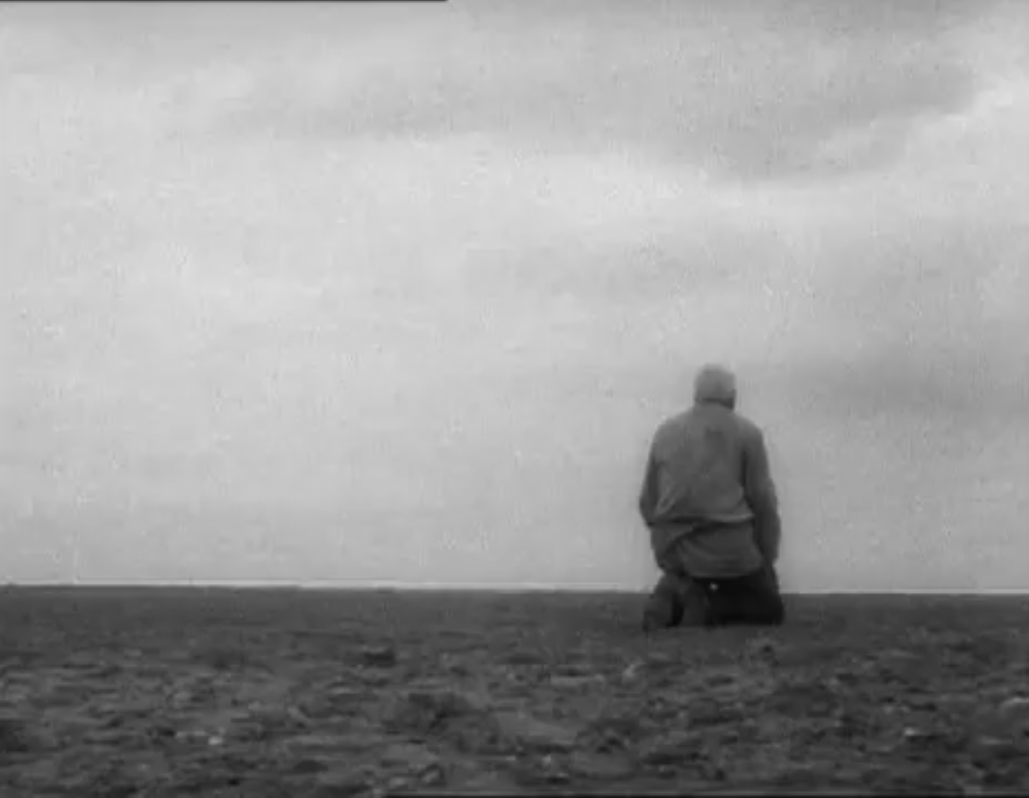 Scofield as Lear. The final scene.

A Midsummer Night's Dream is a trippy play. Love potions are used extensively, several main characters are magical fairies, and one character's head is transformed into a donkey's. But, as one character says, "I never heard / So musical a discord, such sweet thunder."

Peter Hall's version is the film that best captures how wild the events in the forest must feel to the characters — he portrays the sequence, essentially, as a bad drug trip. The special effects used to represent magic are bizarre, as is the camerawork and editing — their very crudeness disorients the viewer. Lights flash, little fairy children carrying musical instruments appear out of nowhere, and the donkey head makes everyone uncomfortable: 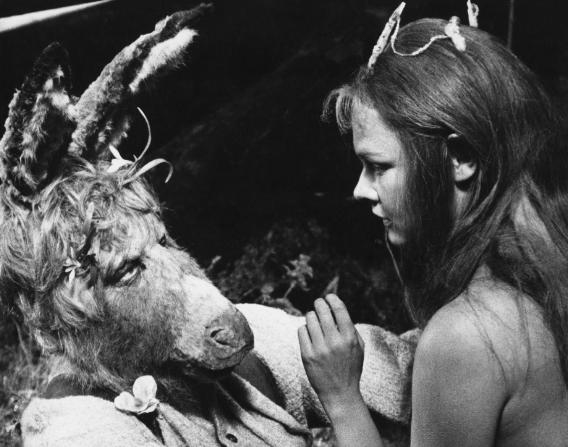 But effects and film tricks aren't enough to make a great Shakespeare adaptation — Hall's film also boasts the best ensemble cast of any on this list. Diana Rigg and Helen Mirren play Helena and Hermia, the female members of the main love quadrangle. Playing the fairies are Ian Holm (later Bilbo Baggins) as Puck, Ian Richardson (later the star of the British House of Cards) as Oberon the fairy king, and Judi Dench as Titania — and they all wear little other than green body paint. Below, a love potion-dosed Dench falls hopelessly in love with the donkey-headed Bottom:

The filmmaking and performances are amusingly bizarre and committed enough to create the impression that anything can happen next. This is quite an accomplishment, since it's actually a very faithful adaptation. Like the best Shakespeare films, it creates an experience that's unique and memorable even for those who've read the play countless times.

Sometimes, directors adapting Shakespeare throw in costumes and settings from the modern age while changing little else, thinking a slight change in design will suffice. Baz Luhrmann, however, commits to doing things differently. 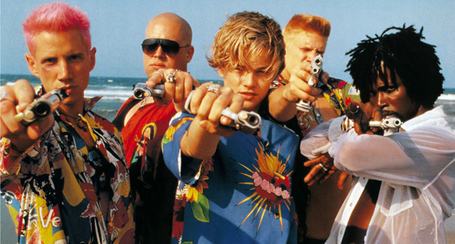 Romeo and his pals.

Luhrmann places his adapation in the present-day town of "Verona Beach," but rather than just playing things straight, he throws in every visual and aural trick he can think of to create moods of silliness, passion, and tragedy — while retaining the original language and plot, rather than replacing it. 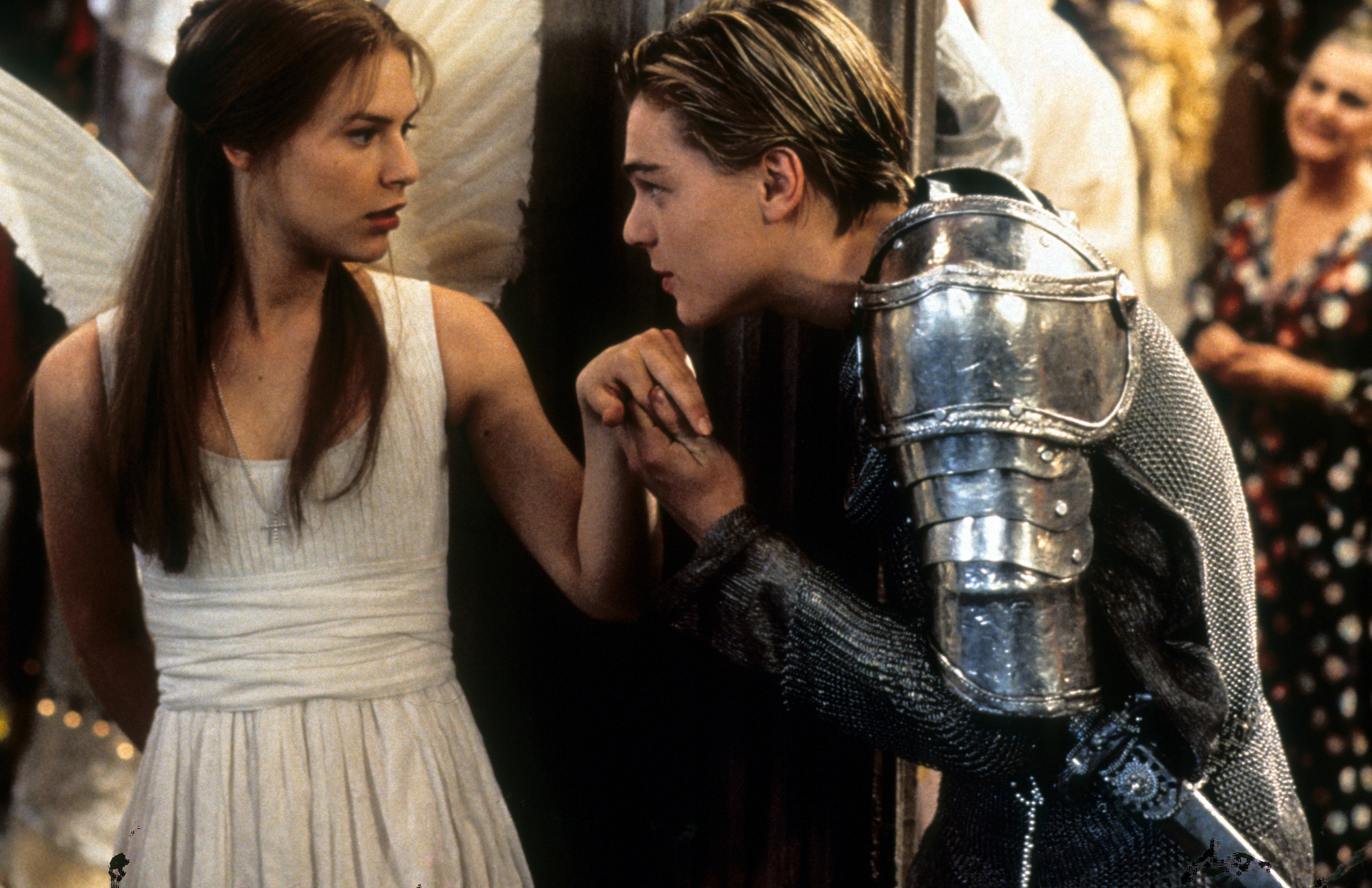 Claire Danes and Leonardo DiCaprio completely sell the young lovers, as evidenced by the passionate following their performances have maintained nearly two decades later. Yes, Luhrmann's "everything, including the kitchen sink" style can be inconsistent and over the top. But when it works, it really works. And the text and themes actually stick quite closely to the original — which is probably why Luhrmann put Shakespeare's name right there in the title.

Macbeth was the first movie Roman Polanski made after his wife Sharon Tate was murdered by the Manson Family. Those events hang over the whole film, which Polanski fills with graphic violence and psychological horror.

As in the original play, the film's most horrific sequence is the murder of Lady Macbeth and her children by Macbeth's agents. For several critics, Polanski's staging of the scene disturbingly evoked the Manson Family murders. It's a very difficult scene to watch — and it's supposed to be. We're seeing the consequences of Macbeth's lust for power, and the horrible things that man can do to man.

The later scene below, where Macbeth learns of his wife's death, is similarly fraught:

Polanski stages Macbeth's famously nihilistic response — that life's "a tale told by an idiot, full of sound and fury, signifying nothing" — partly in voiceover and partly in a quiet monologue. Jon Finch's reserved delivery tells us, more than any of his actual words do, that by this point Macbeth is dead inside.

Shakespeare portrays Richard III as a scheming and evil king who murdered his brother and nephews to gain power for himself. And in his film adaptation, Laurence Olivier embraces that characterization wholeheartedly: 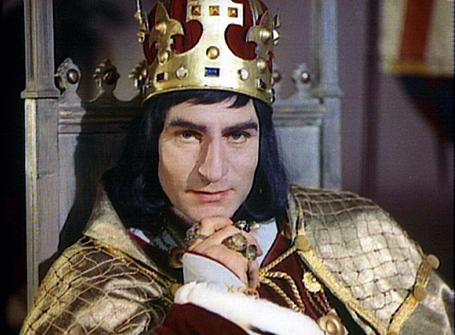 Olivier as Richard. Screenshot from the film.

According to TCM, Olivier borrowed his sneering delivery and hunchbacked gait from a Broadway producer "whom the actor considered one of the most evil people he had ever met." But the real innovation here is in how Olivier filmed his own soliloquies — the first of which is seen below:

Olivier didn't speak while staring off nobly into the distance, or looking around an audience. He looked straight into the camera and spoke directly to you and me, the viewers. He wants us to know how smart he is, to seduce us, to have us join his conspiracy. It's an unnerving effect that was quite unusual at the time — and has since been used to good effect by both the British and American versions of House of Cards, and by subsequent adaptations of Richard III, such as Ian McKellan's fascist-themed version from 1995.

On weekends, director Joss Whedon occasionally invites friends over — including some actor friends — for group Shakespeare readings. Eventually, one went so well that he was inspired to stage a full adaptation of Much Ado About Nothing, on camera. He did the filming in 12 days, at his house, while in the middle of post-production on The Avengers. At first, he intended to just release it online, but he soon decided it was good enough for a studio release. He was right. 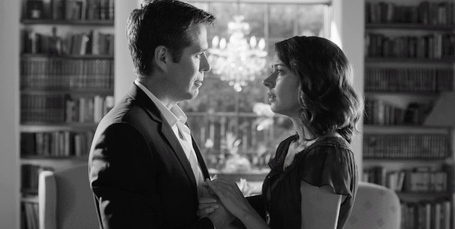 Alexis Denisof as Benedick and Amy Acker as Beatrice.

The main draws of the play are the quarreling potential lovers Beatrice and Benedick, very entertainingly portrayed by Amy Acker and Alexis Denisof. As in countless rom-coms since, it's great fun watching the two square off before inevitably (though begrudgingly) acknowledging that they're right for each other. Here, Beatrice begins their first onscreen interaction by wondering why he's still talking, and pointing out no one's listening to him. "I am loved of all ladies, only you excepted," he responds.

The plot briefly takes some dark turns, and Whedon can't really sell the dreadful treatment of Hero by some characters in a way that makes sense (though that's hardly his fault). But as a whole, the film's a delight. You can tell that everyone involved in the brief shoot was having a blast, and it's infectious.