Share All sharing options for: The best evidence yet Obamacare competition lowers premiums

The White House has long argued that, under Obamacare, competition in the exchanges will lower health premiums. When insurers have to compete side-by-side, the thinking goes, they'll have a new incentive to compete with other health plans on price.

A new paper is arguably the best evidence yet that this might be true.

A trio of health economists shows that a major health insurer's decision to sit out healthcare.gov, only competing in the state-run marketplaces, led to 5.4 percent higher premiums on the federal site.

It's easy to show that exchanges with more competitors have lower premiums, as economists Leemore Dafny, Jonathan Gruber and Christopher Oby chart in this new working paper. 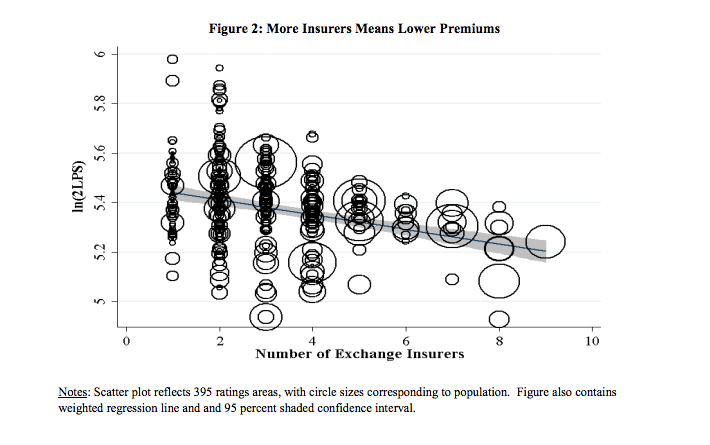 This tells us that markets with more insurers tend to have lower premiums, but doesn't suggest a causal relationship.  There are dozens of the things at play when insurers set prices like how sick the local population is, and how much local hospitals charge for visits.

So Dafny, Gruber and Oby looked at one particular factor that could measure the effect of competition. They homed in on UnitedHealthcare's decision not to sell any plans on healthcare.gov this year, deciding instead to only sell products on the state-marketplaces.

United dropped lots of hints about this approach in late 2013 and early 2014, giving its competitors a pretty decent heads up on where it would, and would not, be selling.  This gives a window to compare how insurers priced in the markets where United decided to compete, and where it didn't.

The new working paper estimates that premiums for the benchmark plan* on healthcare.gov would have been 5.4 percent lower if United had sold on that federal marketplace. And if all major insurers had jumped into the pool, premiums would have cost 11.1 percent less.

This matters a lot for shoppers, and the federal government. Obamacare commits the feds to paying a certain percent of low and middle income shoppers' health insurance premiums. If the overall tap is lower, that puts the government on the hook for a smaller share.

United has already indicated plans to expand into other markets next year, which could be good news for insurance premiums in 2015.