BuzzFeed has achieved an outrageous amount of success in recent years, reaching an estimated 203 million people a month, including 112 million in the US alone, according to Quantcast.

There are a lot of reasons for that but a major one is the site's remarkable talent at relating to people. Many of the site's pieces work by letting readers revel in shared traits or experiences: "35 Signs You Went To A Liberal Arts College In The Early ’90s"; "19 Reasons We Are All Actually Every Single Disney Character"; "26 Struggles Only People With Small Bladders Will Understand." "Nobody wants to be a shill for your brand," former BuzzFeed chief creative officer Jeff Greenspan once told New York Magazine for a profile of the company's founder, Jonah Peretti. "But they are happy to share information and content that helps them promote their own identity."

So where did Peretti get that idea? Peretti's academic writings offer one clue. After graduating from UC Santa Cruz in 1996, Peretti published an article in the cultural theory journal Negations entitled "Capitalism and Schizophrenia: Contemporary Visual Culture and the Acceleration of Identity Formation/Dissolution." After the paper was mentioned in New York's Peretti profile, Critical-Theory.com's Eugene Wolters read through it, and found that it more or less lays out (and critiques) BuzzFeed's entire business model—a full decade before the company was founded.

In brief, the paper argues that, going forward, capitalism will need to be constantly producing identities for people to adopt at an ever-increasing rate. And now Peretti's at the helm of a firm that's doing exactly that.

Peretti's article is an interpretation of Jameson's "Postmodernism and Consumer Society" and Deleuze and Guattari's Anti-Oedipus: Capitalism and Schizophrenia, both of which use "schizophrenia" as a key part of their analysis.

"Schizophrenia" here doesn't have much of anything to do with the actual mental illness (as Jameson writes, "I'm not even sure that the view of schizophrenia I'm about to outline … is clinically accurate"), and in retrospect the use of an actual illness from which millions of people suffer as an abstract tool of cultural criticism is rather cringe-inducing. I use the term here since it's the preferred jargon within cultural theory, but, for the record, it's gross and they should have found another word.

In context of the theory, both Jameson and Deleuze/Guattari use "schizophrenic" to refer to a person without a defined identity or ego. Jameson, for one, thinks "late" capitalism (which he said was beginning to emerge in the mid-1980s, as he was writing) causes that kind of schizophrenia. People usually build identities, after all, at least in part from cultural items (songs, movies, TV shows, advertisements, etc) they encounter. But Jameson thinks that if those items are presented in a scrambled, confusing way to people, they have a hard time forming identities, and run the risk of schizophrenia.

That scrambling of cultural content was starting to happen in the mid-1980s, when Jameson was writing. Peretti's favorite example of this phenomenon is MTV. Whereas variety shows and televised concerts in the 1960s and 70s provided context and structure to the music they presented, MTV instead gave viewers a rapid succession of wildly different sounds and visual accompaniments to those sounds, without any logic connecting one video to another. That, in Jameson's framework, serves to confuse viewers, harm their ability to use culture to build identities, and increase the risk of people failing to build identities altogether — making them "schizophrenic" in his terminology.

"The rapid fire succession of signifiers in MTV style media erodes the viewers sense of temporal continuity," Peretti writes. "To use the same words that Jameson uses to describe schizophrenic experiences, the images that flash across the MTV viewers' retina are 'isolated, disconnected, discontinuous material signifiers which fail to link up into a coherent sequence.'" (As Wolters notes, those rapid fire MTV signifiers are "Not so unlike those GIF-loaded posts on BuzzFeed.") 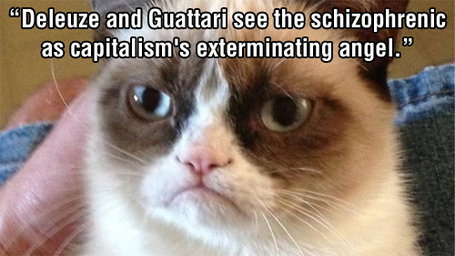 Meme by Eugene Wolters at critical-theory.com

Deleuze and Guattari, by contrast, think the schizophrenic is, as Peretti puts it, "capitalism's exterminating angel." Precisely because the schizophrenic can't turn the messages that capitalist forces is bombarding him with into a coherent identities, he is able to resist those forces and act upon her actual desires.

"Weak egos that are easily formed"

So which is it? Does capitalism, in its advanced stages, need "schizophrenics," or are they the only ones able to resist it?

Neither, Peretti answers. Capitalism needs people to have moments of schizophrenia, where their personal identities are in flux, but it also needs them to be able to recover from those moments with new identities, which can fuel new consumption so as to realize the identities in question. "Capitalism needs schizophrenia, but it also needs egos," he writes. "The contradiction is resolved through the acceleration of the temporal rhythm of late capitalist visual culture. This type of acceleration encourages weak egos that are easily formed, and fade away just as easily."

So you may, say, identify as someone who went to summer camp, but that's not a durable identity, so you'll soon need to pick up another, like, say, someone raised by conservative parents. And the way this identification will happen is through images and video, through "visual culture." Presumably, in this late capitalist world, someone who creates a website that can use pictures and GIFs and videos to form hundreds if not thousands of new identities for people to latch onto will become very successful! Especially so if they allow brands to create and channel these identities themselves by, say, hosting a "Which Barbie Doll Are You?" quiz from Mattel or a video of "Awkward Things We All Do In Our Teens But Would Never Admit" from a company selling acne cleanser. 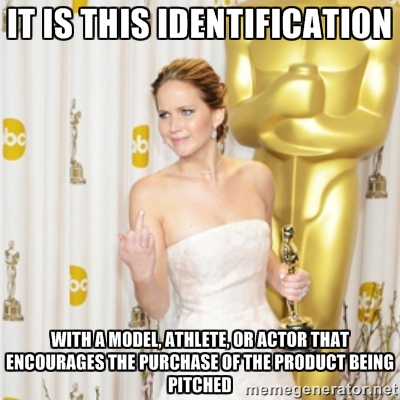 Dylan Matthews and Memegenerator.net, via i.imgur.com

Peretti also cites celebrity culture as a potential mechanism for generating identities. "To promote consumer capitalism the images must have some content to create the possibility for a mirror stage identification," he writes. "It is this identification ­­with a model, athlete, or actor­­ that encourages the purchase of the product being pitched. In order for an advertisement in GQ to be successful, it must provoke an ego formation that makes the product integral to the viewer's identity." So a smart capitalist would provide ways for people to get personally invested in the lives of, say, Jennifer Lawrence, by showing how relatable she is, and how she plugs into readers' identities (or at least the identities they're juggling at the given moment).

Capitalism, Peretti concluded, needs to be constantly producing identities for peoples if the system is to survive. And ten years later, he built a factory to fill that precise need.

Can memes be revolutionary?

To be clear, Peretti's article isn't simply condemning these processes. Indeed, at points he, to quote Wolters, "leaves open the possibility that BuzzFeed is one giant resistance."

For example, Peretti praises "slackers" for embracing consumer culture without actually, well, consuming, thereby denying the forces of capital their ultimate victory. "This refusal to consume defuses the capitalist media's efforts to accelerate the process of identity formation/ dissolution and capital accumulation," he explains.

More importantly, though, there are identity-forming practices that don't just serve to further the interests of capital and so can similarly subvert this state of affairs, he argues, citing the use of drag performance as a form of queer activism as a key example. A robust anti-capitalist movement could similarly use the tools of capital to promote messages that resist it. "Advertising has successfully used both these strategies to accelerate identity formation/dissolution and, by extension, consumer capitalism," he writes. "There is no reason that radical groups could not use similar methods to challenge capitalism and develop alternative collective identities."

It's hard to argue that's what BuzzFeed is, in fact, doing. There's a whole lot more apolitical identity formation ("17 Dogs Who Understand How You Feel About Pizza") than radical political content. But when I asked Peretti a while back about the paper, he at least still had theory jargon down pat:

In plain English: what Peretti thinks the paper means shouldn't be taken as the last word on what it in fact means. When I reached out again via email, asking whether he saw BuzzFeed as embodying the trends described in the paper or as subverting them, he simply replied, "lol."

So who's to say whether we should interpret BuzzFeed as the pinnacle of late capitalism or a way of subverting it? And who's to say whether either one of those options would be a bad thing? Personally, I mostly find this kind of identity formation benign; if someone wants to feel connected to other people with small bladders, what's the harm? But if you're the type to worry about capital's insidious pursuit of cultural hegemony — or about the potential for cultural institutions to shake the foundations of capitalism itself — you ought to give "Capitalism and Schizophrenia" a close reading.