NASA satellites have captured this image of fires burning across North Korea. The fires appeared more or less all at once across the Pennsylvania-sized country, from the de-militarized zone at the southern end to the snowy mountains in the north, suggesting that wildfires alone could not explain them.

The red spots, to be clear, are not flames so large they're visible from space; NASA imagery analysts deduced the locations of fires using special thermal imaging that detects high heat, and have marked those areas with little red annotations.

So what's going on here?

"Many fires appear in farming areas along rivers," NASA notes in writing up the satellite imagery. While the country's best farmland is in the west, which has few fires, many people in the country's east and north farm small pieces of land. As NASA's post explains, "They use fire to clear debris from last year's crop and to help fertilize the soil for the coming season."

"They are probably related to farming and involve either the burning off of old crops or clearance of land for new planting," writes Martyn Williams, a North Korea analyst who blogs at the invaluable North Korea Tech. "It's about this time that the year's crop planting program begins to get underway."

Here's a larger image of the fires: 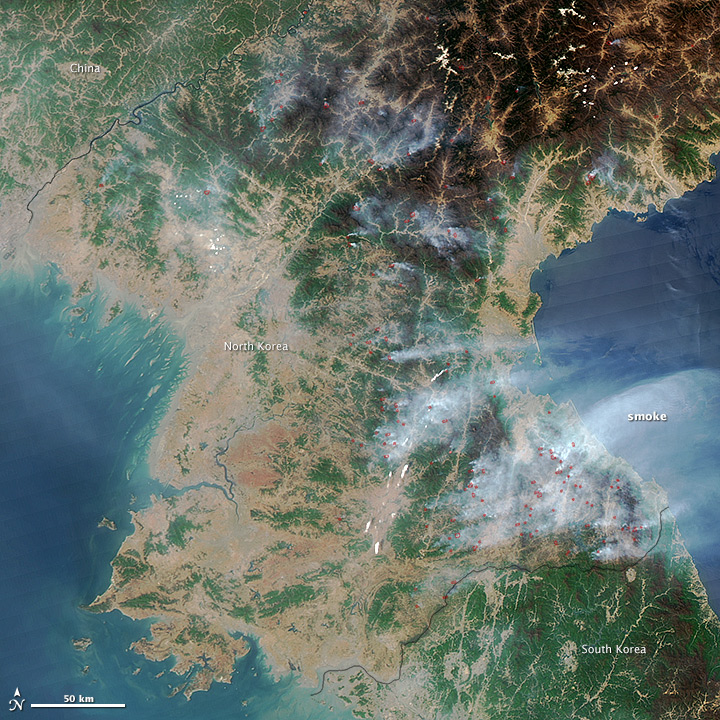 The thing to understand here is that North Korea's agriculture — the system by which the country of 25 million largely feeds itself — is much better than it was during the famine of the 1990s, but it is still one of the world's most rudimentary. The North Korean government tightly controls and centralizes agriculture through "collectivized farms," which allows the state to control North Koreans' ability to feed themselves. The farms are often not mechanized, which means they rely on very old techniques, like burning old crops to fertilize the soil.

But the thing that changed, after that early 1990s when North Korea failed to feed itself and millions of people starved to death, is that the government started tacitly allowing people to run small private farms. Privatization might be an ideological and economic threat to North Korea's totalitarian government, but the regime seems to have concluded that it's still better than mass starvation. That's why there are lots of little, private, off-the-grid farms, particularly in the less-agricultural east and north. Those farms are even more rudimentary than the state-run collectives, which may explain why so many of them seem to be burning their fields right now.

This satellite image, then, isn't just a sign of North Korea's technological backwardness: it's a reminder of the many contradictions that keep this impossibly totalitarian country stable and surviving after so many predictions that it would collapse.