Ahngasuk is a subsistence sea otter hunter living in southeastern Alaska. He reached out after Vox reported on the horrible behaviors of sea otters, and we asked him to tell his side of the story. To fend off hate mail, we are using his traditional Alaska Native name in lieu of his English name. Here's his account of what otter hunting is like, as told to Vox's Dylan Matthews. 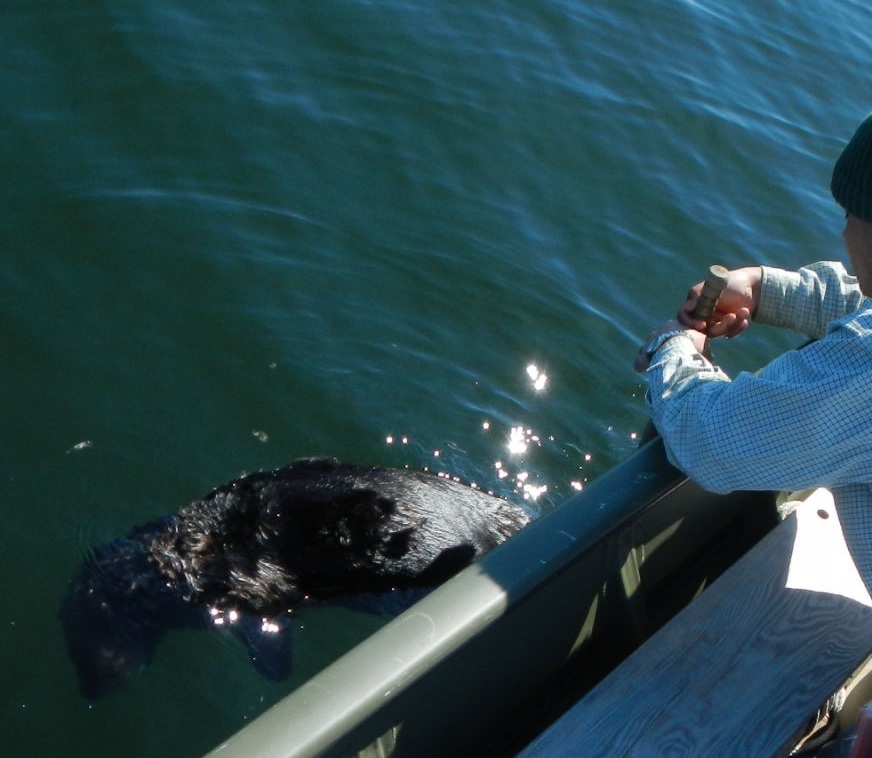 Ahngasuk takes a sea otter out of the water. Photo courtesy of Ahngasuk.

I've been a hunter my entire life. I began trapping squirrels when I was six; my neighbor paid me $1 for each squirrel pelt taken in the general proximity of his house where they were ripping out his insulation. I hunted grouse and ptarmigan for the dinner table after I purchased my first rifle at eight, and shot my first moose when I was 14.

I left Alaska for college but moved back to the southeastern part of the state about eight years ago. At that time, some friends who commercially fish for Dungeness crabs encouraged me to hunt sea otters. I declined, because as an Alaska Native I have been taught by the elders that it is wrong to kill without a good reason.

But soon I came to realize what sea otters are doing here in Southeast Alaska, so I began preparations to hunt them. I only hunt in areas where sea otters compete with people for marine resources. Since time immemorial Alaska Natives have been doing this – we usually hunted sea otters in areas where we wanted to ensure that we still had crabs, urchins, and other animals we depend on.

Where there is food, you can find them. Sea otters eat 20 to 30 percent of their body weight every day. The males I hunt get up to 100 pounds, and females up to 80 pounds, so 20 to 30 percent is a lot of food. Like most wild animals, they take a lot more than they eat. I see sea otters take a few bites from a crab, throw it back, and then get a new one. And because they don’t eat everything they take, they have a large impact on the environment. I have spoken to many divers who tell me that in areas that used to have sea otters, the sea floor looks like a moonscape.

Sometimes I fly (in a small plane) to where the hunt will take place, or I’ll boat there. Either way, I end up in a boat by the time I am hunting. Sea otters can use both auditory and visual cues to avoid hunters. Sound travels very well under water, so they can hear boats coming. Generally I’ll motor to the areas that I know there is an abundance of sea otters. Because they can see the boat coming, rather than motoring directly towards them I will motor towards one side or the other of where they are floating. I usually shoot them when they roll off their backs, because that means they're preparing to dive.

Because usually just the head and flippers are out of the water, almost all of the shots that connect to them are to the head. That means it is over fairly quickly, and they do not have to suffer, which is important to me.

Sea otter meat is delicious. They eat all the good stuff, so you can expect them to taste delicious as well. I eat some of the meat, but I give much of it away to elders in the community. When I hunt, I also collect biological samples for marine mammal scientists. Sometimes this has involved the entire carcass, but usually they just want blood or tooth samples and some of the organs.

I do use the pelts as well. After the first hunt I went on, I gave the larger pelt to an elder. This year, I had a couple orders for sea otter fur handicrafts, but before I filled any of them I gave a scarf to another elder. Elders provide us in the younger generation with so much knowledge and wisdom, and their generation provided us with life, so it is the place of our generation to help provide for them using the wisdom they have given us.

Sea otter fur is just as amazing as everybody says it is. The handicrafts I sell pay for my hunting, and allow me to donate some of what I hunt to places where it can do more good. For example, one of my friends has lost her hair due to chemotherapy. I made her a beautiful sea otter fur hat to cover her head with.

The parts of the sea otter that I do not use or donate to science I will deposit where I know crabs live – in that way, the sea otter can in some small way give back to a population from which they're taken. Taking the life of a sea otter does have some associated guilt with it, but I believe it is important to embrace that guilt. It's important to maintain respect when taking a life. Hunting is one way to be involved in the circles of life, and it is imperative that a healthy amount of respect be part of the hunt.

Only Alaska Natives who live on the coast are allowed to hunt sea otters. Each sea otter needs to be tagged within 30 days of it being taken. That means that the hide and a tooth need to be presented to the Fish and Wildlife Service tagger, who receives the tooth, puts a tag in the pelt, and has me sign some paperwork. After that, there are regulations spelling out what the federal government defines as acceptable Alaska Native handicrafts. For example, they will not permit us to transfer a traditionally made blanket, unless it has a backing on it.

The Feds take this pretty seriously, expending ten of thousands of dollars of resources just to incarcerate an single person for a year and slap them with a $10,000 fine. I guess that way they can say that they are managing the species. 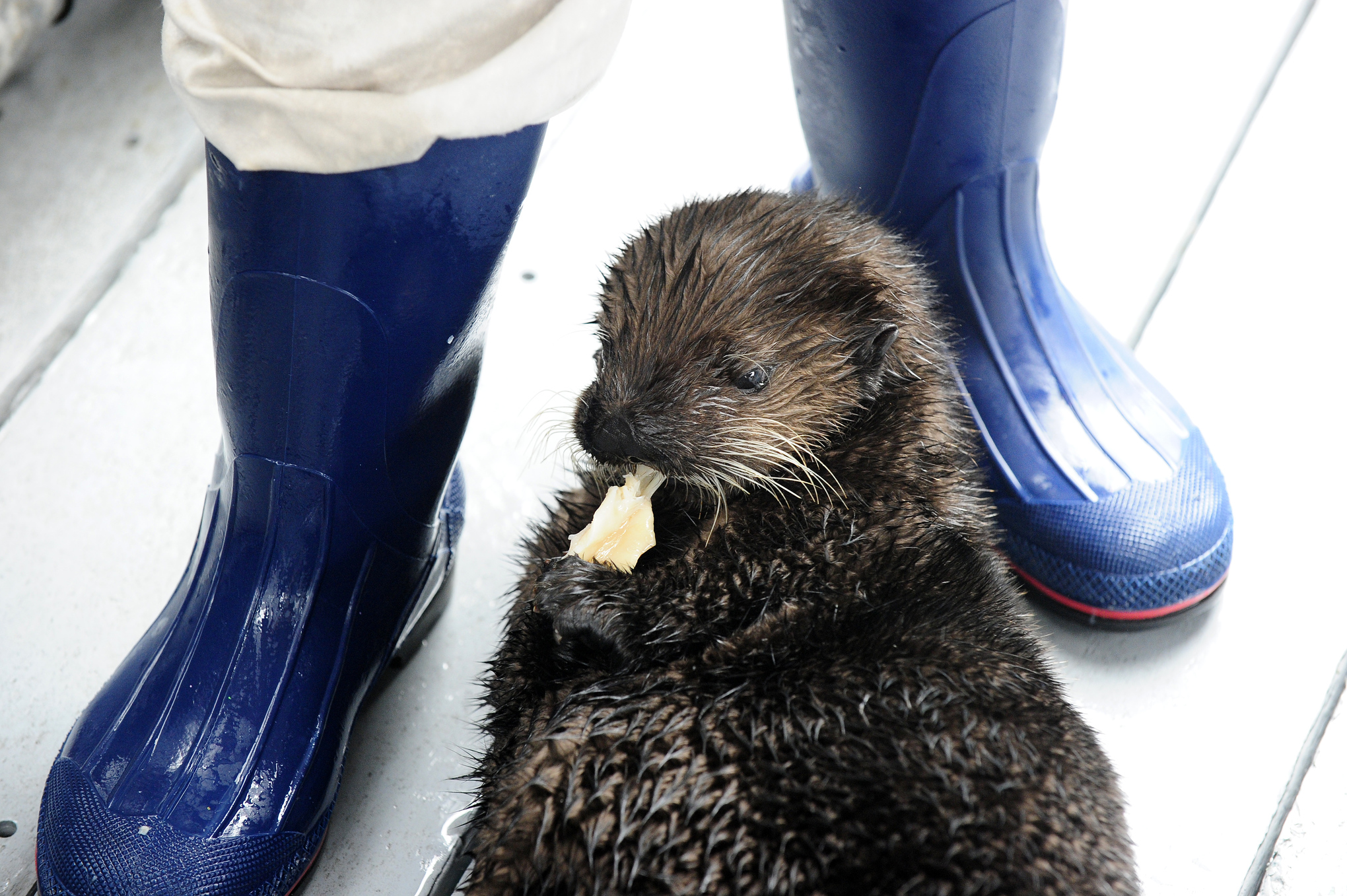 Hunting per se itself is usually not too dangerous. There have been times when I traveled to the hunting grounds, and the waves got really big for the little boat I was in. I also have to think about safety when flying around in a small plane. It doesn’t feel too safe when we hit some turbulence and the plane bounces around.

Once, I shot a sea otter in the chest, which is unusual, as most shots are in the head. After getting a blood sample, I bled him out for about five minutes to keep the boat from getting messy. I thought he was dead, but he proved me wrong. About 20 minutes later, he came to, and stared me right in the eyes, just a couple feet from me. He was right between my hunting partner and me, and in the boat, so shooting him again was out of the question.

I thought he was dead, but he proved me wrong

He stood up, and lunged forward in my direction, and I thought I was going to get bitten. As he lunged forward, he bit into the leg of another sea otter and clamped down hard. My hunting partner used a club, and it was soon over.

Suffice it to say, sea otters can be extremely ferocious, and need to be respected.