Share All sharing options for: Nuclear plants in the US keep closing — that's bad news for climate change

Over the past two years, US power companies have announced the retirement of five nuclear reactors — in Florida, Wisconsin, Vermont, and two in California. Some of those reactors were simply too pricey to keep open in the face of rising maintenance costs and competition from cheap natural gas and wind power.

Further nuclear retirements will make it harder to cut emissions

That's hardly the end of nuclear power in the United States: there are still 100 reactors left around the country, providing 19 percent of the nation's electricity — all without emitting the greenhouse gases responsible for global warming.

But many of those remaining reactors are also facing pressure, and if even more have to close in the years ahead, it will be far more difficult for the US to keep cutting its carbon-dioxide emissions and address climate change. One recent report found that US emissions could rise an additional 4 percent in the years ahead if existing reactors continued to face tailwinds.

The pressures facing US nuclear plants 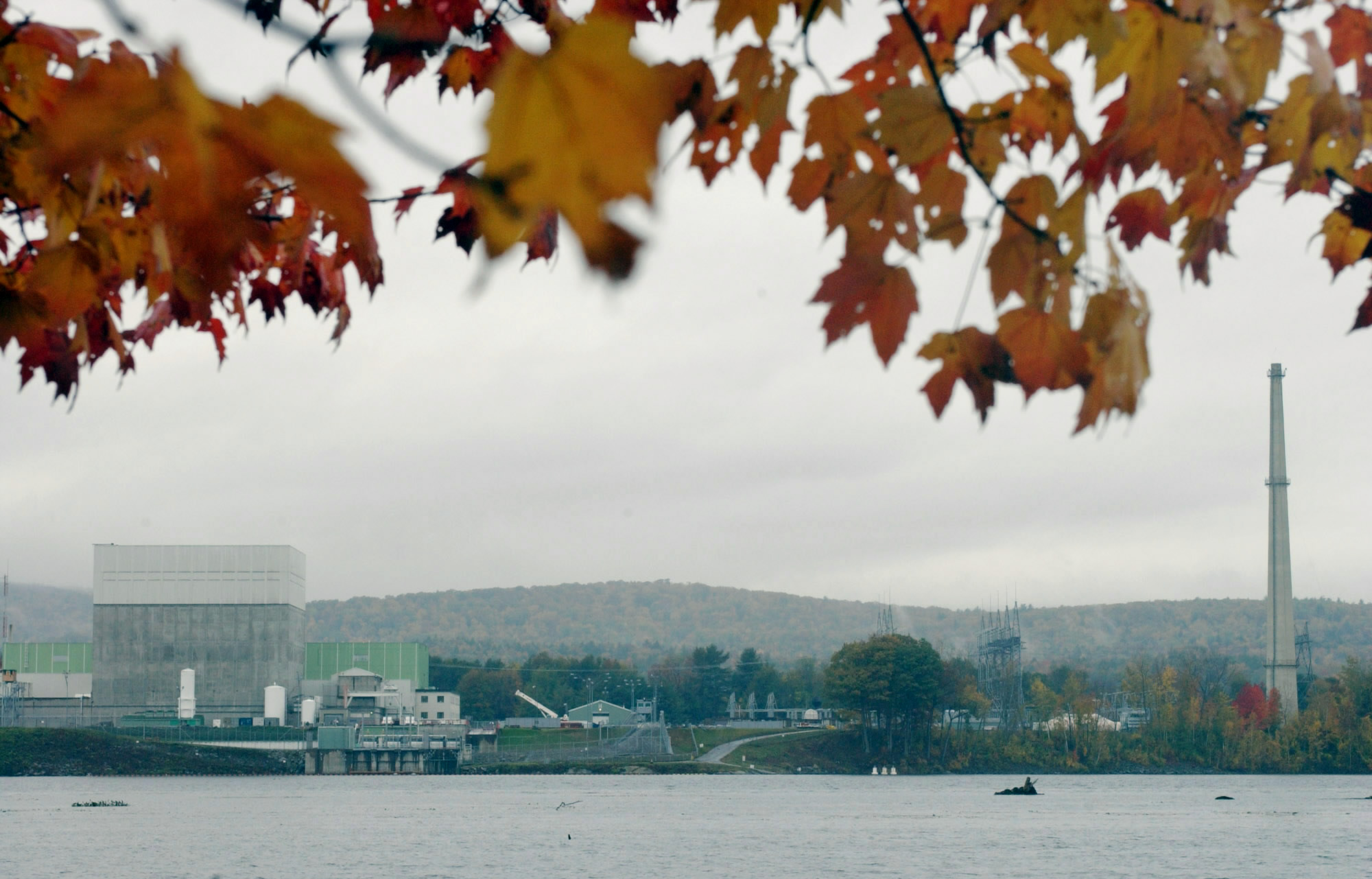 One recent paper by Doug Vine of the Center for Energy and Climate Solutions (C2ES) nicely outlined many of the difficulties facing America's nuclear plants. A lot of it comes down to economics. (C2ES is a nonprofit that gets funding from a variety of electric utilities, including nuclear owners.*)

half the nation's nuclear plants are owned by merchant generators

About half the nation's nuclear plants are owned by independent "merchant generators" who sell electricity in competitive wholesale markets. Unlike regulated utilities, they don't get a guaranteed price for the electricity they sell.

And, in recent years, these generators have been hit hard by competition from other energy sources. The US fracking boom has produced a glut of cheap shale gas. Wind turbines have  been sprouting up all over. Those two sources of energy are pushing down electricity prices, reducing the margins for these nuclear-plant operators.

On top of that, the US nuclear fleet is aging — and many plants need repairs and costly maintenance. In recent years, some merchant generators have decided that they can't sell electricity at high enough prices to pay for those repairs. So, they've decided to retire their reactors. At least, that was a big reason Entergy gave for retiring its Vermont Yankee plant and Dominion gave for closing a reactor in Kewaunee, Wisconsin.

And there aren't a ton of replacements on the horizon: Only five new reactors are slated to get built in the foreseeable future: two in Georgia, two in South Carolina, and one in Tennessee. (Note that new reactors are mainly being built in regulated states where utilities can recover their costs through rate hikes.) Some operators have gotten permission to ramp up the amount of electricity their nuclear plants produce — known as "uprating" — but, for the most part, the economics have become tough.

So what happens when a nuclear power plant gets retired? It depends on the region. But one recent study of a shuttered nuclear plant in California found that greenhouse-gas emissions surged, as the nuclear plant got replaced by fossil fuels.

After a huge nuclear plant in california shut down in 2012, CO2 emissions surged

Back in February 2012, Southern California Edison shut off two nuclear reactors at the San Onofre plant after finding cracks in the steam generator system. (A year later, the company announced that it would retire the reactors for good, deciding it the repair and licensing process would take too long and involve too many lawsuits.)

That plant was massive, providing about 8 percent of California's electricity. So the state went on a frenzy of construction, building mostly new natural gas units and some wind units. In the end, however, fossil fuels were the easiest to deploy. Overall carbon-dioxide emissions in the region rose by 9.2 million tons in the following year — equivalent to putting an extra 2 million cars on the road.

The C2ES paper suggests that this is likely to be the trend if more reactors have to retire. Wind and solar are great clean-energy sources. But, for the most part, they can't provide the same steady, continuous baseload power all day that nuclear plants can. That may change in the future — especially if battery technology improves or wind power becomes more widespread. But, for now, many retired nuclear plants are likely to get replaced by fossil fuels.

What if lots of nuclear plants had to retire?

Recently, the US Energy Information Administration decided to take a closer look at this question. And they found that the future of US emissions was quite sensitive to how many nuclear plants ended up retiring.

Here's a chart I made using their data: 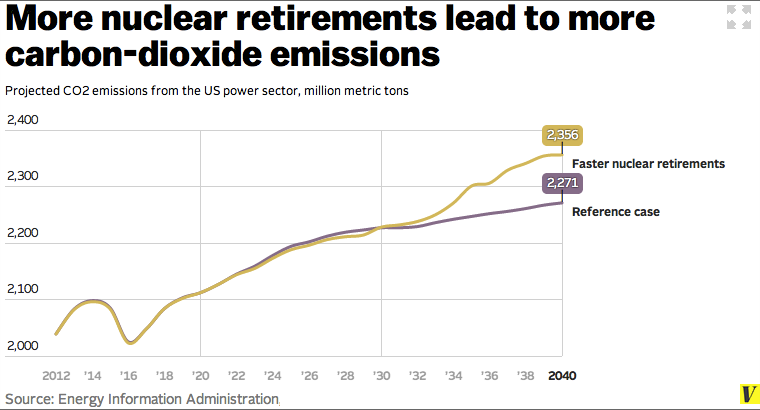 (Note that this y-axis doesn't start at zero — apologies, still working out some kinks in our graphing software.)

The chart above shows two different scenarios explored by the EIA. The "reference case" assumes that the US doesn't make any further energy policy changes and emissions rise gently over time. (This isn't a hard prediction so much as a modeling baseline.)

The "faster nuclear retirements" scenario then assumes that maintenance costs for nuclear plants grows at 3 percent per year — which has in fact been the case since 2008. It also assumes that the Nuclear Regulatory Commission doesn't renew the licenses for any plant over the age of 60 in the decades ahead. (The nuclear industry is currently preparing applications to extend their plants longer than that, but no one knows what the NRC will decide.)

Now, it's hard to say for sure which scenario is more likely to happen — again, these aren't hard predictions. What's notable here, however, is that US power-plant emissions are about 4 percent higher in a scenario where lots of nuclear plants have to retire.

The EIA also modeled a separate scenario in which more and more US coal plants retired — say, due to new carbon-dioxide regulations from the EPA. In this scenario, overall US power-plant emissions decline in the years ahead. However, emissions fall more slowly if coal plant retirements were combined with faster nuclear retirements: 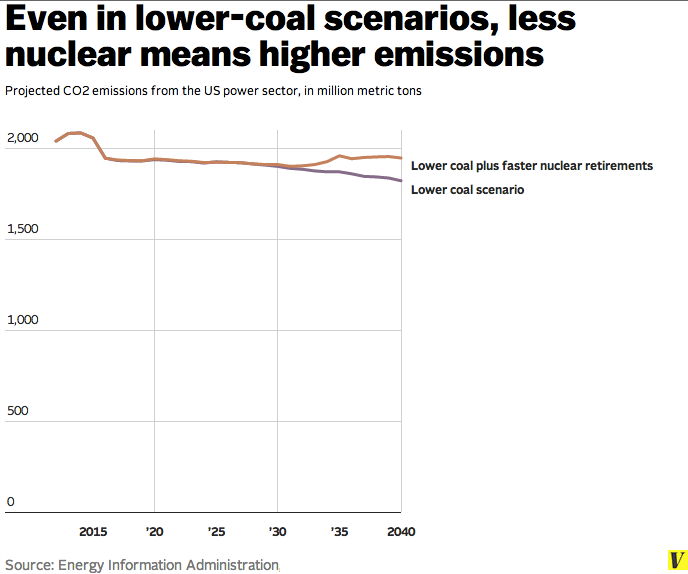 The basic conclusion here: Nuclear power is hardly decisive for the future trajectory of US emissions. But, at the margins, more nuclear retirements will mean more emissions.

Is there any hope for nuclear?

The C2ES paper notes that the electricity that comes from all of the nation's existing nuclear reactors is currently undervalued — it's a large source of carbon-free electricity, but that doesn't count when it has to go up against cheaper fossil fuels like natural gas.

The carbon-free electricity that comes from nuclear plants is undervalued

A carbon tax or price on carbon, which many economists recommend as a way to deal with climate change, would put many of these plants on a firmer footing.

Now, a carbon price wouldn't necessarily make it more economical to build new nuclear power plants. Those tend to take a long time to build — taking from 8 to 10 years to plan and construct — and are extremely expensive. They also tend to attract controversy and are facing ever more stringent safety requirements. (Not to mention all the still-unresolved questions about nuclear waste.)

The C2ES paper, for one, essentially sets aside the issue of building new nuclear plants. It's more concerned with the nation's existing plants — right now, that's a large source of carbon-free electricity that's currently at risk of dwindling in the years ahead.

Further reading: The United States isn't the only country dealing with this question. Japan also saw its carbon-dioxide emissions soar after shuttering its nuclear plants in the wake of Fukushima.