A federal court on Monday struck down Oregon's ban on same-sex marriages, allowing same-sex couples to marry immediately after the decision.

"certain rights are subject to ownership by all and not for the stake hold of popular trend or shifting majorities""Because Oregon's marriage laws discriminate on the basis of sexual orientation without a rational relationship to any legitimate government interest, the laws violate the Equal Protection Clause of the Fourteenth Amendment to the United States Constitution," Judge Michael McShane wrote in his ruling.

It's possible that, as with other same-sex marriage cases, the ruling — and same-sex marriages — will eventually be put on hold until it works through the appeals process. State officials told BuzzFeed they will not appeal the ruling, but the National Organization for Marriage is trying to intervene on behalf of its Oregon members to have the decision held.

"It is at times difficult to see past the shrillness of the debate. Accusations of religious bigotry and banners reading 'God Hates Fags' make for messy democracy and, at times, test the First Amendment resolve of both sides," McShane wrote. "At the core of the Equal Protection Clause [of the US Constitution], however, there exists a foundational belief that certain rights should be shielded from the barking crowds; that certain rights are subject to ownership by all and not for the stake hold of popular trend or shifting majorities."

Oregon is far from the only state to have its same-sex marriage ban repealed since the Supreme Court's 2013 decision on the issue. Most recently, judges struck down bans in Idaho and Arkansas. 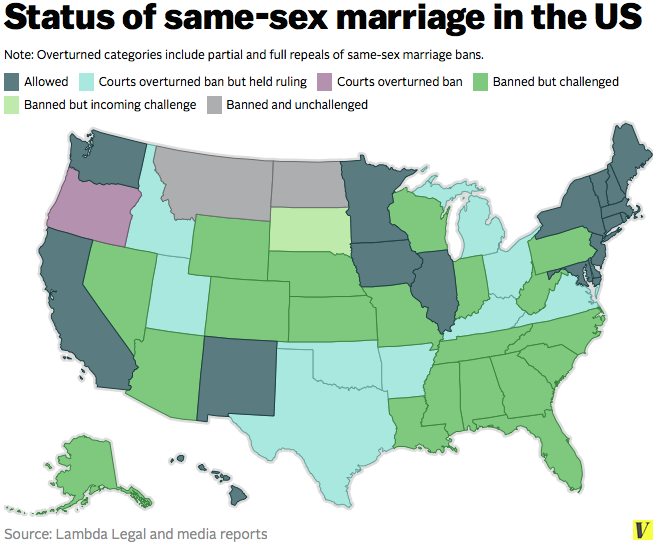 Update: This story was updated as developments came in.