Will the "If our military has to fly coach then so should Congress" act actually save us any money?

Share All sharing options for: Will the "If our military has to fly coach then so should Congress" act actually save us any money?

Representatives Paul Gosar (R-Arizona), Raul Ruiz (D-California), Walter Jones (R-North Carolina), and John Barrow (D-Georgia) have a new bill out featuring the can't-lose populist title "If Our Military Has to Fly Coach Then so Should Congress Act of 2014."

Who's going to vote against that?

Except as far as grandstanding goes, this is a pretty useless piece of legislation. It would prohibit members of Congress from using taxpayer funds to fly first class, but wouldn't actually save any money.

The way Congress works is that each member receives what's called a Members' Representational Allowance that covers staff salaries, mailing costs, office space in the home district, and travel. The travel component of the MRA is based on the distance between the member's office and DC according to a formula depicted in this Congressional Research Service table: 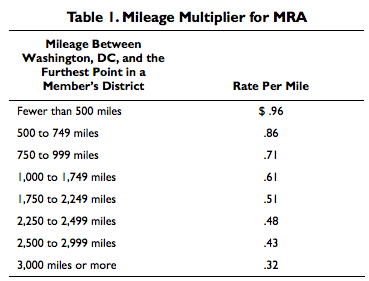 Right now, members can use their MRA travel budget however they like, making their own decisions about the most cost-effective way to allocate the budget. The first-class travel ban would leave members with the exact same amount to spend, but would prohibit using it to pay for upgrades to non-coach travel. A normal person can be easily forgiven for mistaking this piece of grandstanding with a real cost-saving measure. But presumably if there's anyone on earth who understands how the congressional travel budget works, it's the members of Congress and their staff.