Share All sharing options for: The world's fisheries are stagnating — but fish farming is at record highs

The world is eating more fish than ever before. But we're not really catching many more wild fish than we did in the mid-1990s.

How is that possible? Fish farming.

Basically all of the increase in the world's fish production over the past two decades has come from aquaculture — including fish farms, shrimp farms, oyster farms, and so on. That's according to a 2014 report on fisheries and aquaculture from the UN's Food and Agriculture Organization (FAO): 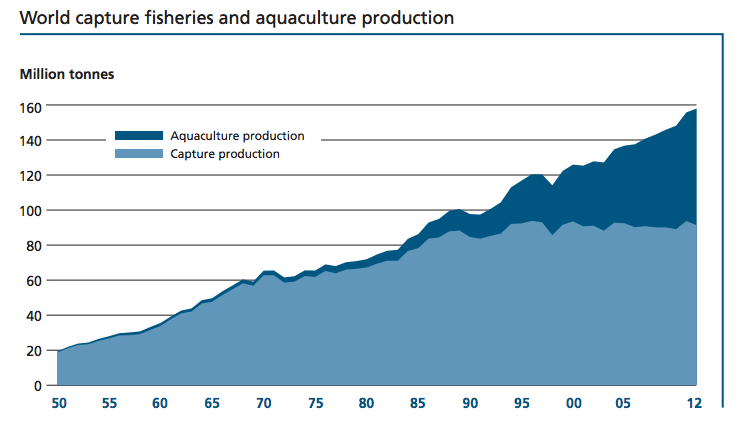 There are a couple of key points from the report:

2) But we're not really catching much more fish. Humans caught 91.3 million tons of fish from the oceans and inland waters in 2012. While that's the second-highest level on record, it's also a bit below 2011 levels and not significantly different from 2007 levels. Wild catches haven't increased significantly since the mid-1990s.

In the North Atlantic and Mediterranean, catches have been shrinking

The trends in wild catches vary from region to region. In the Northwest and Central Pacific, fishermen are catching more fish than ever.

But in the North Atlantic and Mediterranean and Black Sea, the number of fish being caught declined in 2011 and 2012. Some of that might be because of depletion due to overfishing, but it also may be due to new fishing restrictions aimed at rebuilding stocks.

3) So aquaculture is filling in the gap. Aquaculture — which includes fish farms — now supplies 42 percent of the world's fish production. And that number keeps increasing each year.

The boom in fish farming is a big reason why fish consumption keeps rising even though fisheries have basically flatlined. In fast-growing Asia, for instance, fish farms have outproduced wild catches since 2008 — and aquaculture now provides 54 percent of all fish.

The FAO report says there's little evidence that farmed fish are any less nutritious, on average, than wild fish — and tend to be an "excellent alternative in a healthy diet." As such, the report predicts that aquaculture will keep growing in the future. But is that a good thing?

The pros and cons of aquaculture

Aquaculture typically involves raising fish in tanks, ponds, or enclosed bits of the ocean. And there are environmental upsides and downsides here.

For one, fish farming takes pressure off of wild fisheries. Indeed, the FAO noted that the number of "overfished" wild stocks actually decreased between 2011 and 2012 — from 30 percent down to 28.8 percent. The growth of aquaculture seems to be helping alleviate some of the pressure on wild fish stocks.

At the same time, fish farms can raise their own environmental issues — from the use of antibiotics in farms to the disposal of waste. There's also the fact that carnivorous farmed fish like salmon require lots and lots of wild fish to be caught for food.

Among other things, the UN report warns that fish farms need to be "less dependent on whole wild fish for feeds" in order to become sustainable. One way to do that? Switch up the type of fish that get heavily farmed. For instance, silver carp and grass carp require far fewer wild fish for food than, say, salmon. But, of course, in many regions salmon is popular and silver carp isn't — so changing this up would require shifts in consumer tastes.

-- Marian Swain wrote a great rundown of the potential environmental upsides of aquaculture in Slate.

-- How the US stopped its fisheries from collapsing