The CIA says it will stop doing fake vaccination campaigns

Share All sharing options for: The CIA says it will stop doing fake vaccination campaigns

The revelation in 2011 that the CIA used a fake Hepatitis B vaccination program as part of its hunt for Osama bin Laden has often been cited as one reason that governments and parents are refusing vaccines in parts of Pakistan and Afghanistan.

the possible eradication of polio hinges largely on Pakistan

The director of the CIA has ordered the agency to "make no operational use of vaccination programs, which includes vaccination workers," according to a letter obtained by Yahoo News.

The letter from the Obama administration was addressed to the deans of 12 public health schools in response to concerns about the use of public-heath programs in covert operations. (You can read the entire letter at Yahoo News.)

As I covered extensively in a previous post, the fate of polio hinges largely on Pakistan. And recent increase of polio cases in the region — caused, in part, by a lack of vaccinations — led the World Health Organization to declare polio a public health emergency earlier this month. The CIA rumors were one obstacle here — though far from the only one.

Polio vaccination is currently stalled in parts of Pakistan

Vaccine workers have been targets of violence

A lack of security can seriously complicate vaccination efforts in the Karachi metropolitan area, in Khyber Pakhtunkhwa (formerly known as the North-West Frontier Province), and in the semi-autonomous Federally Administered Tribal Areas (where many 2014 polio cases are occurring).

The Taliban has a strong presence in these areas, and vaccine workers have been targets of violence — dozens have been killed in targeted attacks.

There are some places where vaccinators can't go at all. In 2012, a Taliban commander banned vaccinations against polio in North Waziristan until drone strikes ceased. Vaccination has also been essentially forbidden in South Waziristan and parts of Khyber Pakhtunkhwa. (Both North and South Waziristan are in FATA.)

Public-health officials have cited the lack of vaccinations as one reason why polio cases are rising sharply in Pakistan.

Yet most parents still want to vaccinate their children

There are all sorts of rumors in Pakistan, public-health experts say, that vaccinations are some kind of Western plot to gather intelligence or sterilize children — or that they violate Islamic law. 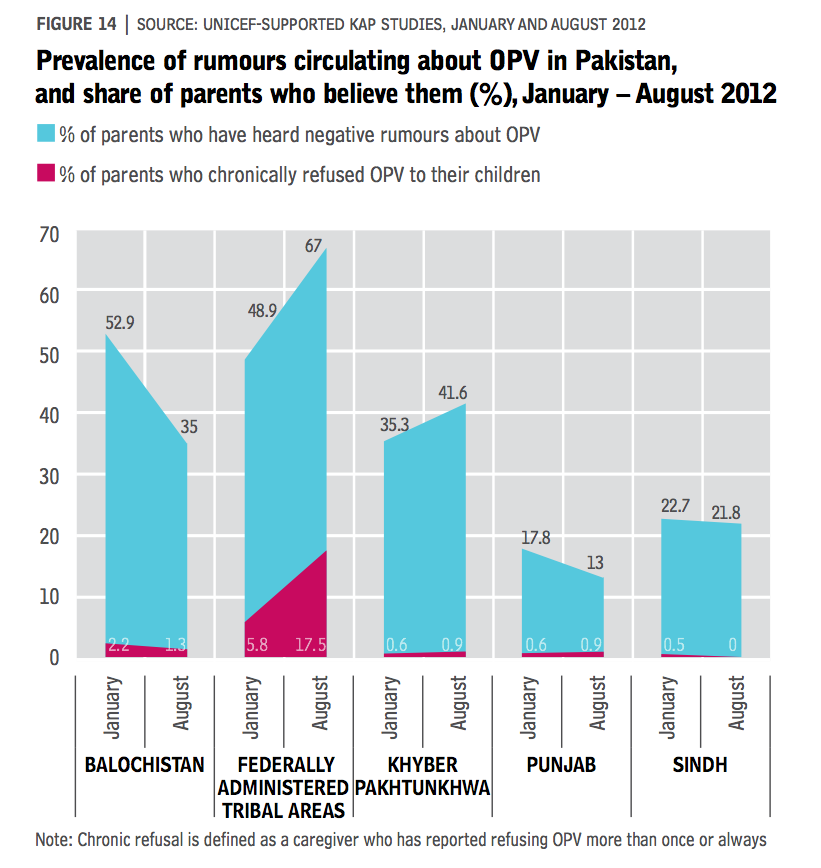 A more recent, unpublished poll finds that about 86 percent of parents in FATA think that vaccinating children for polio is a good or very good idea, according to a UNICEF source I talked to a few weeks ago. (UNICEF is in charge of the communication and vaccine-supply aspects of the polio eradication campaign.)

"People are really accepting of the concept of vaccination,"  Sherine Guirguis, UNICEF's senior communication manager for development for polio, told me. She's in charge of understanding communities' demands and perceptions about polio vaccinations. But, she says, "It can be tipped the other way if we don't keep our eye on it.

Vaccine workers can't operate within some of these areas for political reasons, but they have been working around that to make vaccines available. For example, about 40 percent of families in North and South Waziristan also have homes in other districts.

So health workers have been offering vaccines at strategic transit points. They've been making sure that health care centers outside of these areas are fully stocked with polio vaccines. And there's also a huge effort to give vaccines to children crossing the Pakistan/Afghanistan border.