Why the US is always so unprepared to fight wildfires

Share All sharing options for: Why the US is always so unprepared to fight wildfires

The broad view among experts is that wildfires in the western United States will keep getting more destructive in the years ahead. That's partly because global warming will make the fire season worse, and partly because more people are living in fire-prone areas.

Yet every year Congress seems totally unprepared for this fact.

This year, the federal government is predicting that its $1.4 billion fire suppression budget will prove inadequate for the upcoming fire season, which is expected to be especially bad given the drought in California. (The massive wildfire near San Diego last week came weeks before fire season typically gets underway.)

As a result, the US Forest Service and Department of Interior expect they'll have to pull $470 million from other accounts — including programs that are supposed to help prevent fires in the first place. That, in turn, could make future wildfires even worse.

If those forecasts hold up, this will be the 7th time in the last 12 years that Congress hasn't adequately funded federal firefighting programs. Since 2002, the Department of Agriculture, which runs the Forest Service, has had to pull at least $2.8 billion from other programs in order to fight fires — without always getting fully reimbursed by Congress. And the problem is only likely to get worse in the years ahead.

The first key fact to note here is that US wildfires have gotten much bigger over the past three decades. There's some variation from year to year, but the overall trend is upward: 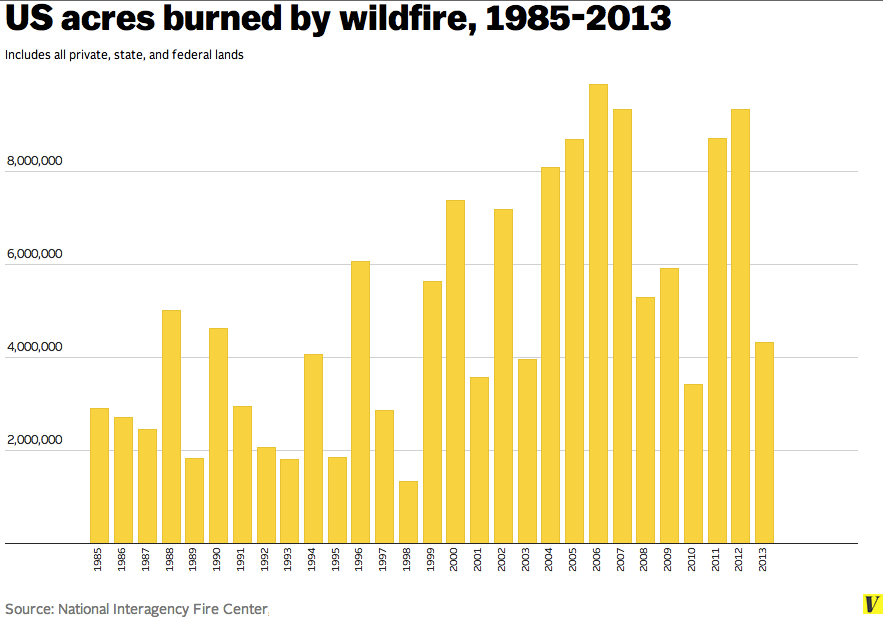 One recent study in Geophysical Research Letters found that wildfires in the western United States grew at a rate of 90,000 acres per year between 1984 and 2011. What's more, the authors found, the increase was statistically unlikely to be due to random chance.

There are a couple of reasons why wildfires might be growing. Poor forest management has arguably played a role. In some areas, managers have suppressed smaller fires to protect nearby homes and let brush build up — making the forests more susceptible to massive blazes. Inadequate budgets are another big factor.

But the researchers noted that global warming is also a likely culprit, not least because wildfires are growing in virtually every region in the West.

"The really amazing thing is that we don't just see an increase in one or two regions," says lead author Philip Dennison, a geographer at the University of Utah in Salt Lake City. "We're seeing it almost everywhere — in the mountain regions, in the Southwest. That tells us that something bigger is going on, and that thing appears to be climate change."

Indeed, that's why scientists expect wildfires to keep getting bigger as the planet keeps warming. One study in 2012 by a team of researchers at the University of California at Berkeley looked at 16 climate models and concluded that wildfire activity would become more widespread in the western United States if global warming continues.

Second, the cost to the federal government of fighting wildfires keeps going up and up: 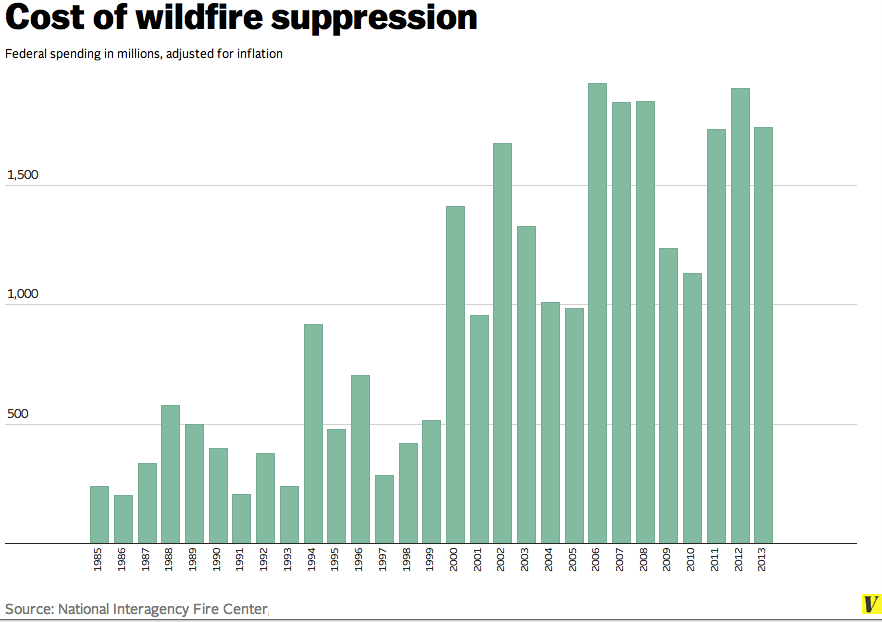 Note that the chart above shows federal spending on fire suppression — which averaged more than $1.7 billion in the last three years. (The federal government also spends about $1.5 billion on fire protection, including paying firefighters and programs to thin out forests.)

More and more people are living in fire-prone areas

Costs are going up partly because the wildfires themselves are getting bigger. But it's also a function of the fact that more and more people are living in fire-prone areas. In Colorado, for example, some 250,000 new residents have settled into the fire-prone "red zone" over the past two decades.

All those new homes increase the overall economic damage from fires. It also raises the cost of suppression, as firefighters have to focus on protecting nearby homes when dealing with a large fire. And, as one study from Headwaters Economics found, that all diverts money from programs to prevent wildfires in the first place.

And Congress is making things worse

Put it all together, and many experts and politicians have argued that the way Congress plans for wildfires has become obsolete and counterproductive.

Right now, Congress gives agencies like the US Forest Service a budget for fire suppression that's based on the average cost of wildfires over the previous 10 years. Of course, if wildfires are getting bigger over time, that's going to create constant shortfalls.

And when shortfalls do happen, the Forest Service currently has to dip into other accounts to pay for firefighting — including fuel-reduction programs that are meant to prevent fires in the first place. (Sometimes Congress reimburses the agencies for these costs after the fact, but often not.) That makes future forest fires even more likely.

There are plenty of ideas for reform here. In the Senate, Sen. Ron Wyden (D-Oregon) and Sen. Mike Crapo (R-Idaho) have introduced a bill to revamp the budget process for fires. Congress would give agencies like the US Forest Service a set budget for predictable firefighting and fire prevention programs each year. Then, when firefighting costs soared in a given year, extra money would be doled out through emergency disaster bills. (There's a counterpart bill in the House.)

Somewhat differently, the Obama administration has proposed that Congress create a special disaster fund that agencies like the Forest Service could draw on when their firefighting costs were unexpectedly high.

But given that the federal government regularly runs out of money to fight wildfires — and usually has to dip into fire-prevention programs midway through the fire season — it's clear that something needs to change.

Further reading: Check out this excellent four-part series from AZCentral for a look at how these dynamics are playing out in Arizona. The state's wildlands are "dangerously overgrown," and more than 230,000 people have moved into wildfire-prone areas since 1990.