Scientists may have figured out how to convert light into matter

Share All sharing options for: Scientists may have figured out how to convert light into matter

Eighty years ago, physicists Gregory Breit and John Wheeler calculated that if you smashed pure photons of light together, you could theoretically convert them into tangible matter — but said that actually producing this process would be so difficult that it'd be "hopeless to try to observe… in laboratory experiments".

In a new article in the journal Nature Photonics, scientists at Imperial College London led by Oliver Pike propose a practical way of accomplishing this that would use lasers, a slab of gold, and an empty can.

Their "photon-photon collider" would serve as yet another demonstration of Einstein's famous E = mc2 equation, which describes the relationship between matter and energy. In a sense, it would reverse the process of nuclear fission — smashing light photons together to create particles of matter, instead of splitting matter apart to release energy.

Now, this isn't quite a food synthesizer that could be used to manufacture everyday objects — it would convert light photons into around 100,000 electrons and positrons, at most — and it's still just an idea at this point. But this relatively simple technique would use existing technology, and the scientists hope experiments to test it will begin within as little as a year.

How the photon-photon collider would work 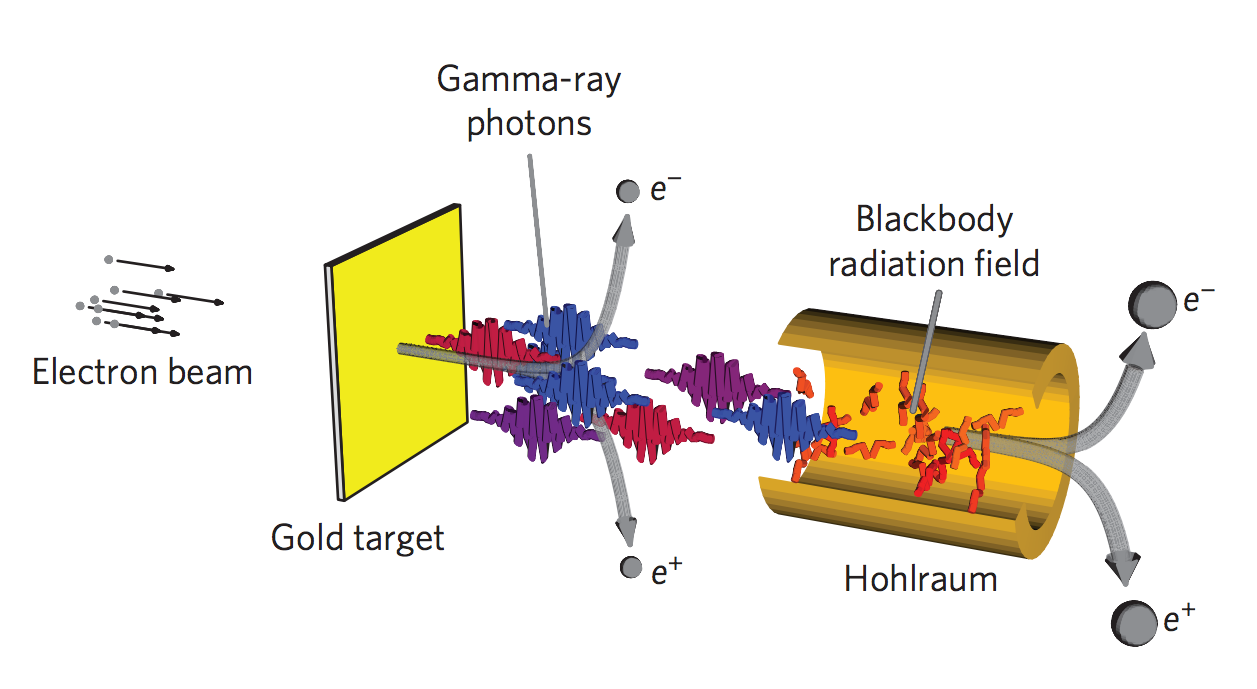 The experiment would begin with a beam of electrons moving at extremely fast speeds — just below the speed of light — that's fired into a slab of gold. This collision would produce a beam of extremely high-energy gamma-ray photons — similar to light, but billions of times more energetic than the visible light we see normally.

These photons would then be directed into a tiny gold can called a hohlraum. A separate high-energy laser beam would also be aimed at the inner surface of the can, heating it and producing distinct photons emitted as blackbody radiation.

collisions between high-energy photons would produces tiny particles of matter

If the scientists' calculations are correct, the collisions between these two types of high-energy photons would produce hundreds of thousands of tiny particles of matter, which could be detected as they emerge from the hohlraum. Voilà: massless energy is turned into mass.

This type of experiment won't be a practical means of manufacturing objects, but will help demonstrate a critical part of physicists' theory on how light and matter interact. It could also help scientists better understand what happened in the moments after the Big Bang, when similar bursts of gamma-ray photons were produced.

Scientists had previously turned light photons into matter, but they had to use existing matter (in the form of electrons) to do it. This new experiment would filter out the electrons used in the preliminary stage — so, if successful, this will be the very first time pure, massless light energy is converted into matter.