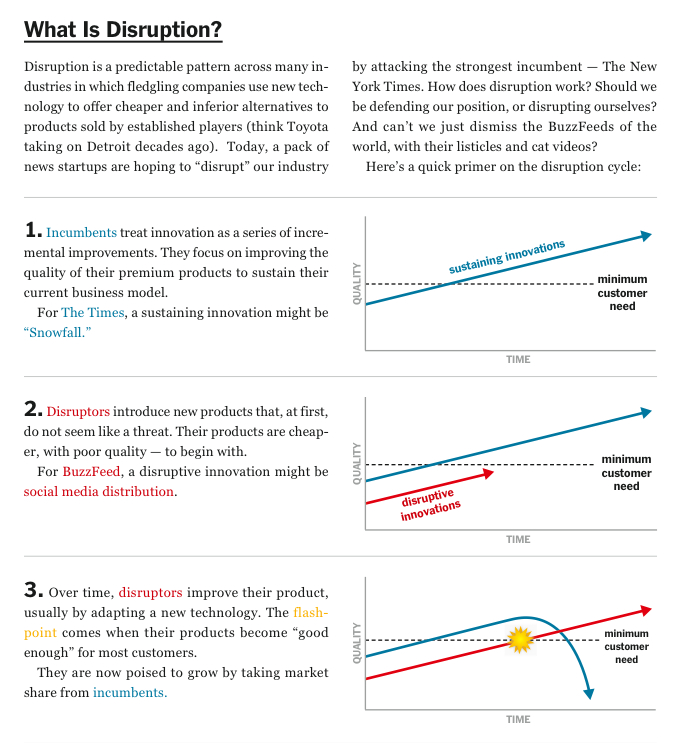 Over the past couple of years, a disruptive product has become a buzzword meaning, roughly, "a new thing that a lot of people buy." But that's not what's useful about the idea of disruption at all. The original theory comes from Clayton Christensen's study of things like the hard drive and steel industries where he realized that disruptive products tend to combine new technologies, cheaper production, and — crucially — worse products.

That last bit is the key: it's the poor quality and low profit margins of the new product that prevent the incumbent business from recognizing the threat. But as the competitors experiment with the new production technologies they become better able to produce high-quality, high-profit products than the incumbents, and they eventually move up the value chain and disrupt the incumbent's core business.

There are lots of threats to the NYT that aren't disruptive

There are lots of threats that aren't disruptive. USA Today, for instance, has a huge web site and is doing some really interesting things online, but they're just a direct competitor to the NYT. They're doing more or less what the Times does and trying to do it better.

Conversely, Buzzfeed is a disruptive threat to the New York Times. They began leveraging technology to churn out aggregated videos and light listicles that are targeted at generating social shares. Their content was — and is — much worse than what the New York Times offers. But they're getting better fast. Now they're using their technology advantage to also do foreign reporting and feature journalism in ways that are much better suited to the social web and much cheaper to produce.

I've read a lot of descriptions of how disruption works. But the New York Times' three-part infographic here is easily the clearest explanation I've come across.