The case for raising chickens in virtual reality

Share All sharing options for: The case for raising chickens in virtual reality

Austin Stewart is an assistant professor of design at Iowa State University with a simple idea: maybe we should help chickens play second life. Through virtual reality goggles. Before we kill and eat them.

The idea, called Second Livestock, has gone viral since getting picked up in the Ames Tribune (Iowa State's local paper) and then Fast Company, and it may seem silly, but as with most wacky-seeming ideas, there's a more sophisticated argument being made here than you might expect. I called up Stewart Friday to walk me through the case for developing virtual reality-enabled, massively multiplayer online games for chickens. Here's his case.

It enables chickens to live a free-range life

Key to the vision of Second Livestock is that it would enable what Stewart calls "Virtual Free Range™" living. In theory, you could run a farm of Second Livestock-playing chickens, who in fact live cheek by jowl with each other, but who perceive themselves as living together on an open field.

Stewart envisions Second Livestock as purely a social experience between chickens rather than as a game involving AI bots pretending to be chickens. "Maybe the farmer could disguise himself as a chicken to check on his flock, but there would be no non-player characters," he says. "They'd be real chickens, because the facilities are all networked together, and they'd be in the same virtual world, and they'd have microphones."

But it avoids the disadvantages of conventional free range farming

The most obvious cost of free range farming, from the farmer's perspective, is that it requires more land per chicken than raising them in cages very close to one another. Second Livestock would enable farmers to raise the chickens closer together while still providing the mental experience of living on an open field.

But there are also benefits to the chicken relative to free range farming, Stewart says. He got the initial germ of the idea for Second Livestock from a talk by Michael Mercil, chair of the department of art at Ohio State (where Stewart went to grad school), in which Mercil emphasized that free range living can be rather dangerous and stressful for chickens. "There's research suggesting that free range chickens show all the signs of having a stressful life," Stewart says. "They have more broken bones, they get broken legs, etc., whereas birds raised in little boxes don't have those indicators of stress. And who's to say which is better?"

Second Livestock allows farms to avoid that stress, both for the chickens' sake and because the risk of physical injury or death that comes with free range farming isn't present. The latter factor could make Second Livestock-raised chickens cheaper than free range ones. "You don't have the loss you do when you farm free range chickens," Stewart explains. "You'd be harvesting a significantly higher number of chickens." 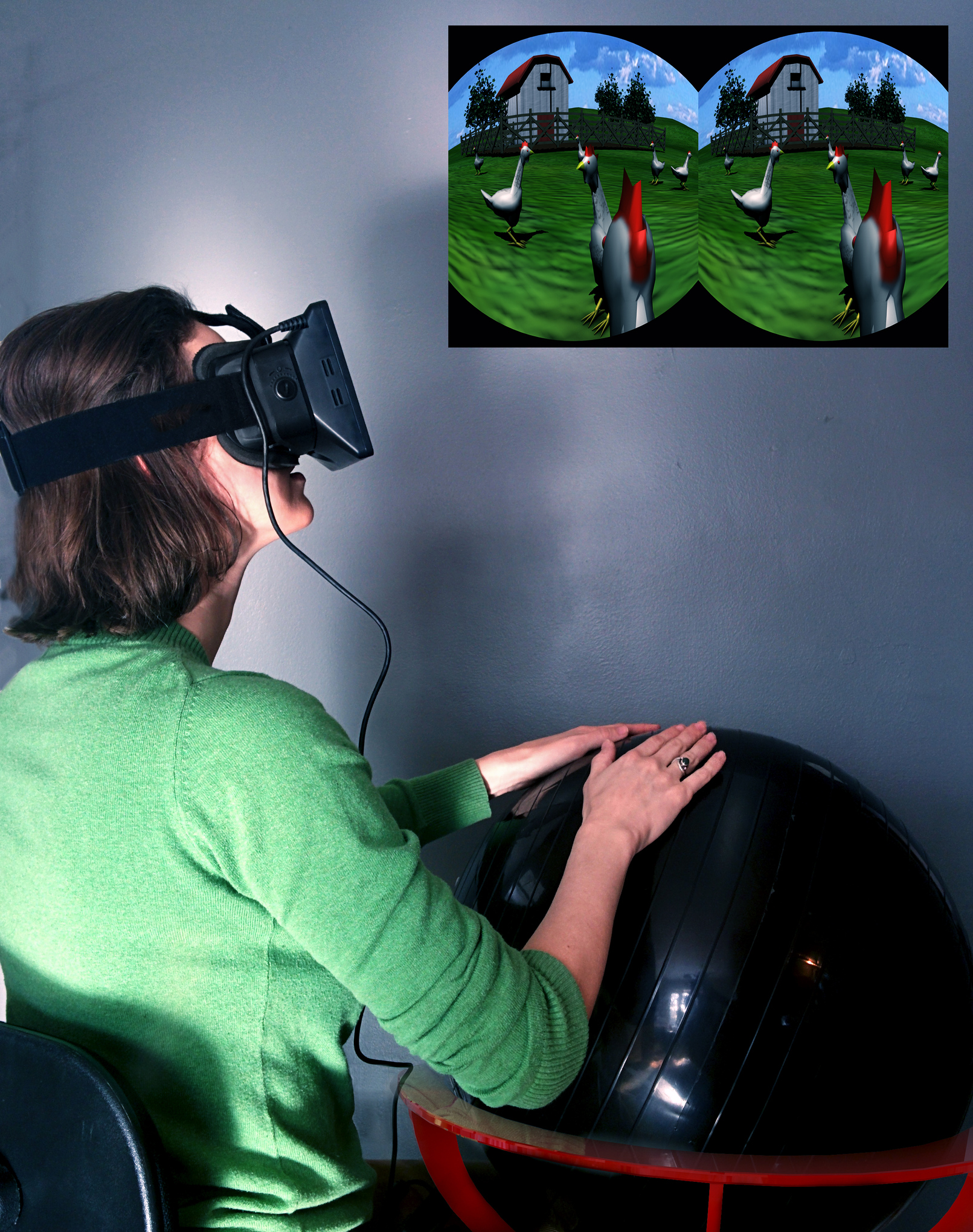 A human testing out Second Livestock. Courtesy of Austin Stewart.

When describing the actual map of Second Livestock (developed using the game engine Unity by Stewart and an Iowa State student of his, Ryan Wade), Stewart gets fairly utopian. "There's water sources and little bugs that crawl around, that are mapped to where the food and water trays are [in the cage], so they can bend and actually drink water and eat food," he explains. "Those things are the ideal of chicken life, and there are no predators, obviously. So they're free to just worry about chicken business."

But would chickens actually, you know, like that? It's hard to say. While Stewart has created an exhibition wherein one can put on an Oculus Rift and see the world of Second Livestock, he has yet to test it on real chickens. That'd require approval from various ethics committees at his university, and Stewart is a designer, rather than an animal technologist. "I don't feel comfortable strapping a headset on a chicken and seeing what happens," he says. And he's open to the idea that, if tested, it might just not work. "Will animals actually accept a virtual world as readily as we do, or is there some level of intelligence or imagination that needs to happen where we can suspend disbelief more readily than a chicken can?" he asks. "I don't know."

The idea was more to start a discussion about the world we're comfortable letting the animals we eat live in — and that we're comfortable living in ourselves. "I feel like this is more of  a design project, to get people to have a conversation about animal husbandry," he says. "We live in boxes, just like the chickens we eat."

Correction: This article originally misspelled Ryan Wade's name and said he went to Ohio State rather than Iowa State. We regret the error.