Share All sharing options for: A group needs just 23 people in it for 2 of them to probably share a birthday

So you've got a cocktail party full of people, or a classroom full of students, or a relatively small office. What's the likelihood that two people will share a birthday, leading to two rounds of cupcakes or two rounds of drinks in the same day?

It's bigger than you might think. If there are at least 23 people in the room, it's more likely than not that two of them were born on the same date. That seems counterintuitive; there are way more than 23 possible birthdays in a year. But it's a well-trod area of probability theory known as the "birthday problem."

The way to make sense of it is to think about it backwards: How likely is it that, with 23 people in a room, none of them shares a birthday? There are 253 possible ways to pair up everyone in the room, and thus 253 possible birthdate combinations. (Here's the math behind that.)

Try it for yourself here. Here's a longer example from Khan Academy, using a room of 30:

Birthday probability problem: The probability that at least 2 people in a room of 30 share the same birthday.

I started to wonder about this two years ago, in the first couple of months after Vox launched. At the time, we just had 23 full-time editorial employees. And in May 2014, we had two sets of shared birthdays: one on May 9, and one on my birthday, May 18. (Happy birthday to me, and to Matt Yglesias!)

There are statistics to back up that self-centered reaction. It's almost even odds if you're in a group of 23 people that two people will share a birthday, but it's much less likely — about 6 percent — that one of those two people will be you.

Some birthdays are more common than others

The most unlikely thing about our shared birthday, it turns out, is that it's in May.

The birthday problem probability math assumes that birthdays are spread perfectly evenly throughout the year. And anyone with a Facebook account knows that's not the case.

The New York Times published data from Harvard professor Amitabh Chandra on the most popular birthdays in the U.S. Between 1973 and 1999, the most common birthday was Sept. 16; the least common (except Feb. 29) was Christmas. Here it is in a heat map from Facebook's Andy Kriebel: 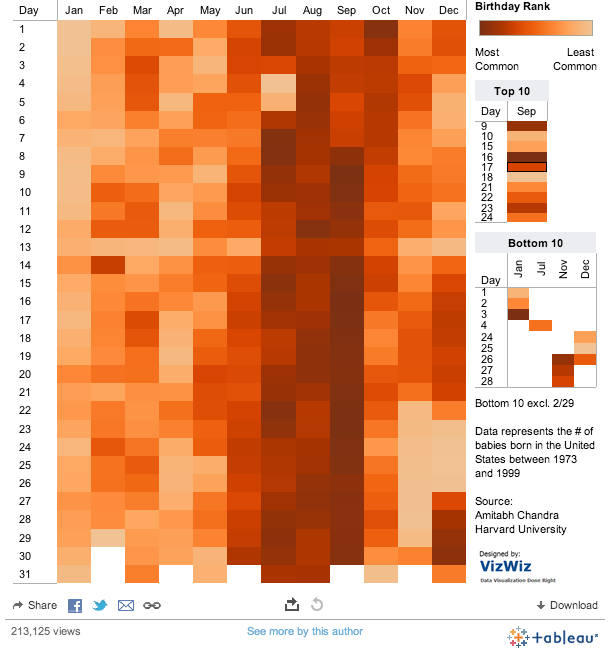 September babies are really, really common. (Nine months after the holidays.) In fact, they take up the top 10 most common birthdays. July birthdays come in a close second.

May 18  — my birthday, and Matt's — was the 188th most popular, just missing the top half. So it's more unusual to have two Vox birthdays on  May 18 than Sept. 16. But two Dec. 25 birthdays would be really incredible.