Share All sharing options for: Where people really love their countries — and where they kinda don’t

In 48 out of 52 countries who participated in an international survey, more than 70 percent of people surveyed said they are proud or very proud of their country. Except in four interesting cases: Japan, Germany, Ukraine, and Taiwan.

Using data from the 2010-2014 World Values Survey, redditor DMan9797 built a chart ranking countries by the percentage of citizens who responded "very proud" to the question "How proud are you to be [American/German/Russian/etc.]?" As you can see from the below map, people in the 52 countries sampled responded in very different ways. 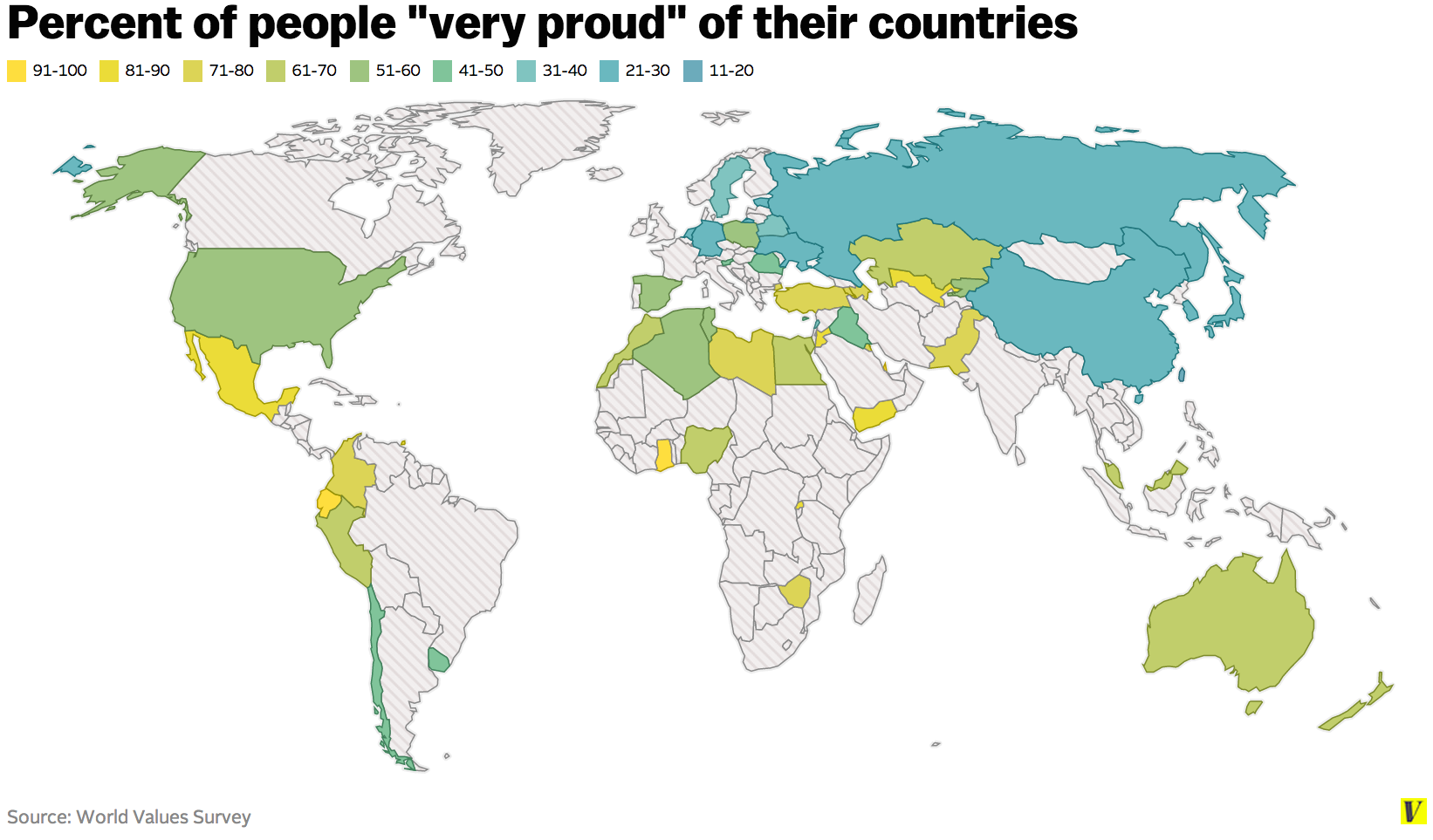 However, that's a little misleading. People were also allowed to respond "quite proud," which doesn't seem like a much weaker statement of pride than "very proud." And when you add the results of "quite proud" to "very proud," you find something very different. Almost everywhere, over 80 percent of citizens are proud to be from their homeland: 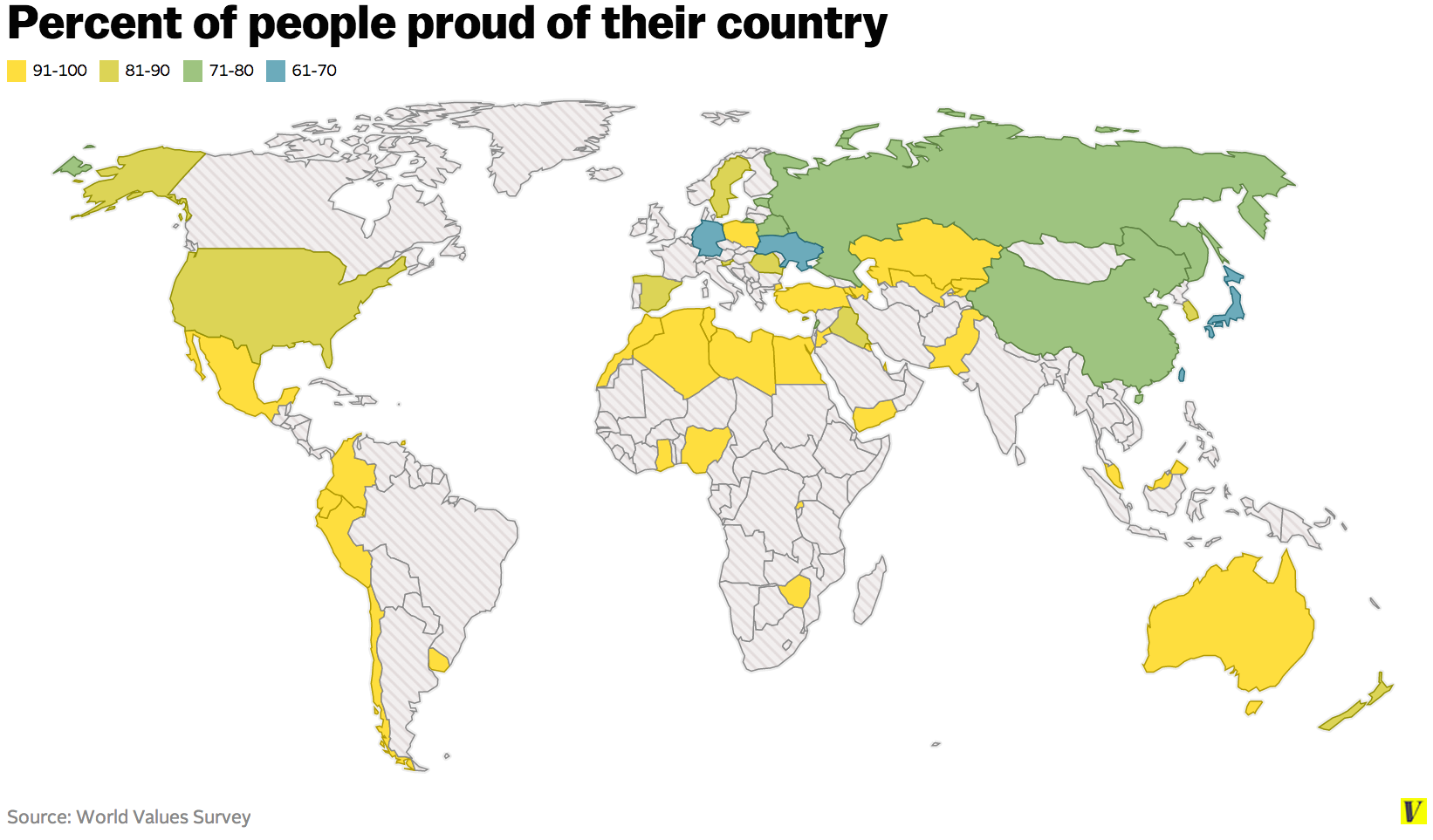 There were only four countries that where, respectively, fewer than 30 percent were very proud and fewer than 70 percent were proud to be from their country: Germany, Japan, Ukraine, and Taiwan.

Each of those four countries where pride was unusually low has something interesting to it. For Germany and Japan, it suggests that the post-World War II hangups about nationalism may have not quite gone away. Since their defeats, both countries have developed a much more complicated relationship with national pride — in some ways, German and Japanese nationalism run amok were responsible for the whole thing. This sense of national guilt, or at least a wariness of too much national pride, might be making it harder for German and Japanese folk to feel immense amounts of national pride. 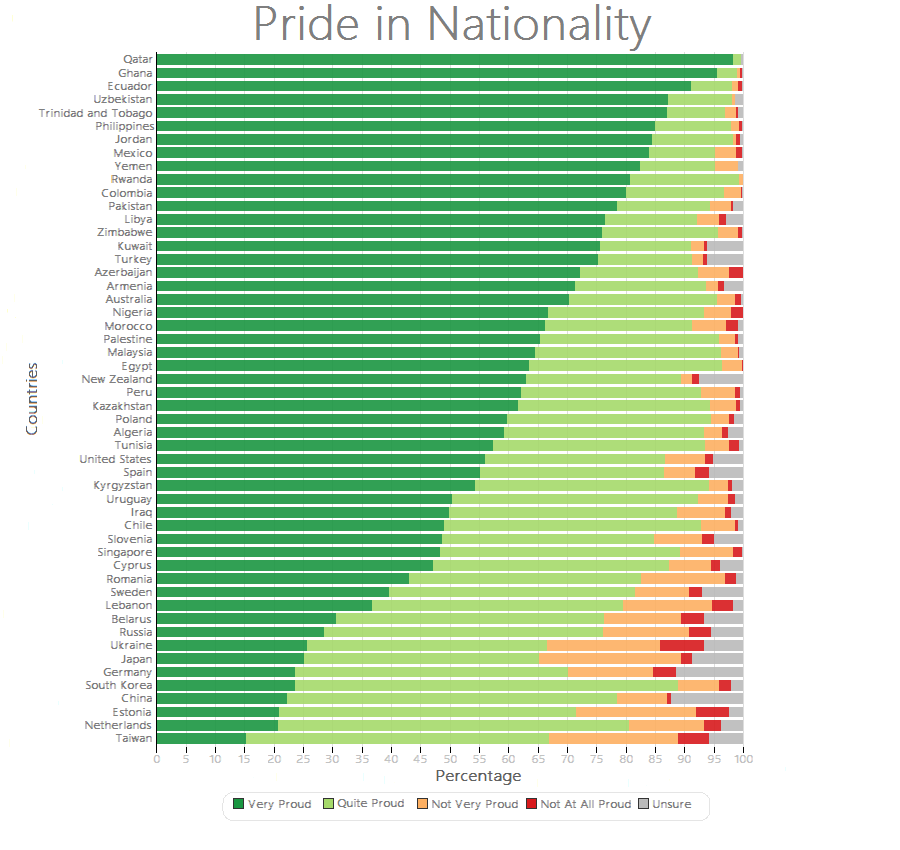 In Ukraine, the issue may be the country's ethno-linguistic divides. As many know by now, eastern Ukrainians and Crimeans tend to be more sympathetic to Russia than the rest of Ukraine. That divide was one of the underlying causes of the current crisis between Ukraine and Russia. So it's likely that eastern Ukrainians and Crimeans, many of whom were less than thrilled about being Ukrainian even when the survey began in 2010, reported abnormally low levels of Ukrainian pride. Estonia's results may support that theory as well: the Baltic country just barely dodged the sub-70 percent prideful club, and it has a significant ethnic Russian minority.

Then there's Taiwan, whose results are almost certainly about tension with mainland China. 20 percent of Taiwanese outright favor reunification with China, and 43.5 percent of Taiwanese also identify as Chinese ("Zhongguo ren," which could mean Taiwanese, mainland Chinese, or both). This complicated relationship with the People's Republic probably explains why Taiwanese people aren't quite as proud of their country as other peoples are.

It's probably no coincidence that countries where people have lower than usual national pride also have recent histories of being the bad guys in World War Two or being in big international disputes that complicate their sense of national identity. If it takes that kind of trauma to damage people's pride in their countries, then we have to conclude that nationalism is still one of the most prevalent political forces on Earth.