Share All sharing options for: The plot to use Fannie Mae and Freddie Mac to steal billions from the taxpayer

Ever since Fannie Mae and Freddie Mac went bust necessitating a federal takeover and about $190 billion in bailout money to cover their debts, plans have abounded about how to best fix the mortgage finance system in the United States. There are plans from the left and plans from the right and many many plans from the center.

And then there is a plan from four hedge fund managers — Bill Ackman, Bruce Berkowitz, John Paulson, and Richard Perry — who think the right solution is for the government to hand them tens of billions of dollars for no good reason at all. It's a plan so shocking that the fact that it's even receiving any consideration at all is a testament to the extent to which our republic is becoming a corrupt oligarchy. And the longer the question of what to do with Fannie and Freddie remains unresolved the higher the risk that they will somehow manage to get their way.

What's the current state of Fannie and Freddie?

At the moment both Fannie Mae and Freddie Mac are in a status known as conservatorship and run by a government agency called the Federal Housing Finance Agency under the terms of the Housing and Economic Recovery Act of 2008 that passed Congress with overwhelming bipartisan support and was signed into law by George W. Bush. After several years of monetary losses, Fannie and Freddie (collectively known as Government Sponsored Enterprises or GSEs) have become profitable again thanks to a combination of low interest rates, explicit federal guarantees of their debt, and a modest revival in the housing market.

Right now, virtually all of those profits are paid as dividends to the Treasury Department, reducing the federal budget deficit.

What do the hedge funders want?

When the GSEs were nationalized, shares of their stock plummeted precipitously in value for the very sensible reason that the shares no longer paid any dividends or conferred any control over the companies. As the stock became nearly worthless, it was delisted from stock exchanges. Nonetheless, it continued to trade "over the counter" as a penny stock. Buying a share of Fannie or Freddie was essentially taking a flier on the proposition that the government would, in the future and for no particular reason, start paying out dividends to whoever bought the worthless stock.

Eventually the situation attracted the attention of a handful of hedge funds who decided they might have the political muscle to make that dream a reality.

They scooped up a bunch of shares and now they — along with an assortment of mostly smaller banks that also held GSE shares — are trying to get the courts or Congress to give them the money. The idea is that rather than the profits flowing to the Treasury until Fannie and Freddie can eventually be replaced with a new system, the profits should stack up in Fannie and Freddie's accounts and then the GSEs should be "reprivatized" in the hands of the vulture investors who bought the shares.

What is the case for doing this?

On the policy merits, the proponents of handing a small fortune over to hedge funds have put together the following audaciously misleading chart: 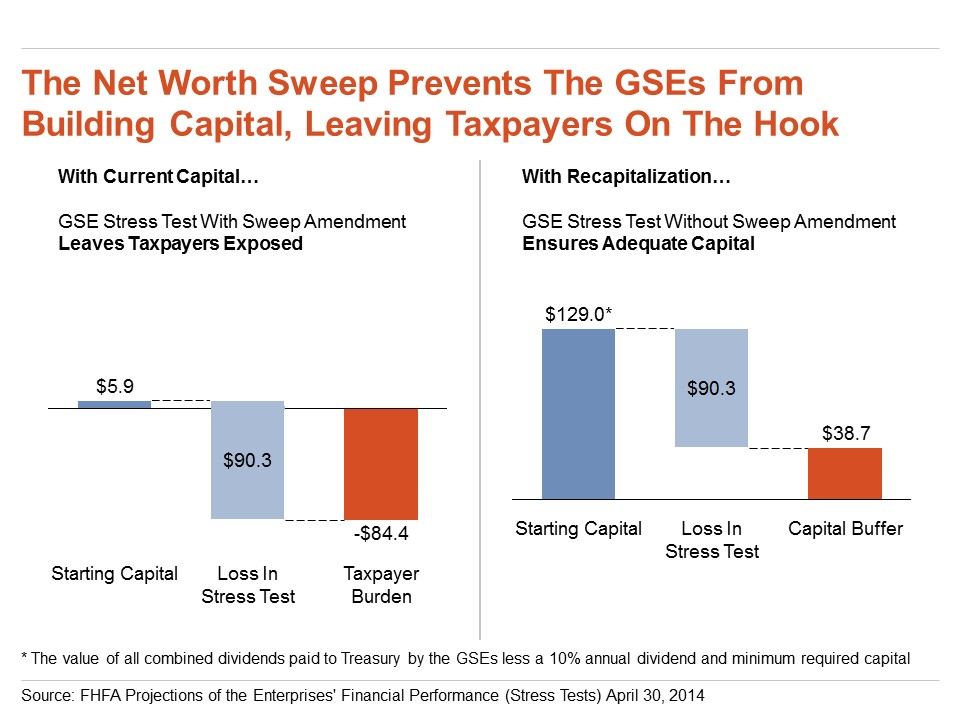 This is as if I tried to persuade you that your current retirement fund is too risky, so you should just hand the money over to me. Once you have no money there's no more risk of loss!

Surely they have a better argument than that, right? 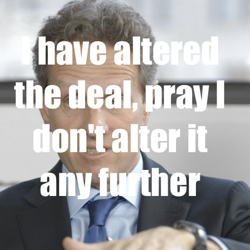 Not on the policy merits, no. But they do have a lawsuit going arguing that the current situation violates the terms of the Housing and Economic Recovery Act. This hinges in part on the fact that the current dividend situation dates only to 2012. The original terms of the bailout structured Treasury's payment to the GSEs as "senior preferred stock" that was owed a 10 percent dividend. Eventually it became clear that GSE profits would become so large as to leave a substantial amount of money left over even after the payment of the 10 percent dividend.

That's when the Treasury Department decided to alter the deal to the current "profit sweep" scenario. At the time, Peter Wallison of the conservative American Enterprise Institute described the sweep plan as "a really good idea" noting that it was the best way to prevent un-reformed versions of Fannie and Freddie from returning to the American financial landscape.

Litigation against the federal governments claims that this was illegal. I am not a lawyer, but as Gina Chon reported for the Financial Times "research firm Cornerstone Macro said it doubted whether shareholders would 'ever receive anything of value,' partly because of the weak legal arguments in the lawsuit." Indeed, Cornerstone's note on this is headlined "Fannie and Freddie Shareholders Have a Weak Case."

Where does this leave things?

Nobody expects Fannie and Freddie reform to pass this year. Conservatives and liberal blocs in Congress both have objections to the bipartisan legislation, and if anything supporters of the current reform bill are likely to lose clout after the election when new chairs will be in place.

The longer the GSEs remain in limbo the more bites at the apple the shareholders will have to try to convince Congress to see it their way.