Share All sharing options for: Medicaid expansion means more patients will be able to fill their prescriptions

It's hard to overstate the importance of prescription drugs in our health care system. Nearly half of Americans report using at least one prescription drug, and the nation collectively fills more than 3.7 billion prescriptions annually.

Modern medicine has largely stamped out infectious diseases in the developed world; now chronic conditions like cancer, heart disease, and diabetes are among the leading causes of death. The drugs that treat these conditions prevent unnecessary hospitalizations, improve quality of life, and prolong lives.

But prescription drugs often come with high price tags, meaning not everyone — particularly the uninsured — can afford the drugs they are prescribed. According to a recent report from the National Center for Health Statistics, the uninsured were over four times more likely to forego a prescription due to cost than the insured. 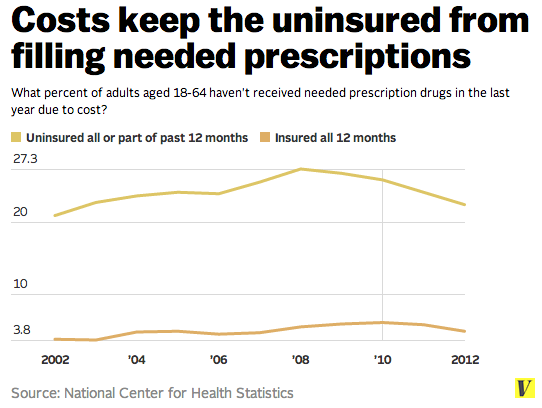 A reported 22.4 percent of the uninsured didn't receive needed prescription drugs in 2012. Among the uninsured living below the poverty line, this climbs to 30.7 percent.

The Medicaid expansion has the potential to change this for many low-income uninsured. Expansion states are required to offer prescription drug benefits that, at a minimum, mimic the state's standard on the private exchange. Paired with Medicaid's financial protections — premiums and co-pays are small, if the state uses them at all — this ought to bring important prescription drugs within financial reach for millions of previously-uninsured Americans.

Some people fear that expanding insurance too quickly for too many people will cause access problems — that it will be hard to get a medical appointment because too many of the newly-insured will be trying to utilize services. This is called "pent-up demand." But in at least one state, pent-up demand isn't for appointments; it's for drugs.

"We actually saw most of the pent-up demand in prescriptions that had been previously written, but never filled."

Joe Thompson, Arkansas's surgeon general, recently spoke at a briefing about the state's experience with Medicaid expansion. Many of Arkansas's low-income uninsured apparently had had written prescriptions in hand, but couldn't afford to fill them before the expansion went live in January.

"We actually saw most of the pent-up demand in prescriptions that had been previously written but never filled," Thompson said. "So the first week of January people knew they had a condition — they had seen a doctor one way or another and gotten a prescription — suddenly had a financial barrier lifted."

It'll be awhile until the data is in, but affordable access to important prescription drugs is one way we might expect health reform to improve health in the long run.