Why Americans will elect Republicans even though they agree with Democrats

Share All sharing options for: Why Americans will elect Republicans even though they agree with Democrats

What's wrong with this sentence: Americans will vote for the party they agree with more on the issues in the election.

Well, for starters, it's simply not true.

Over at the Upshot, Brendan Nyhan pours ice water on Democrats taking comfort in the fact that polls show Americans trust Democrats to do a better job on the key issues facing the nation. As he points out, Democrats had an even larger advantage on that question in 2010, and an even larger advantage than that in 1994, and they got routed both years. And yes, of course he made a great graph: 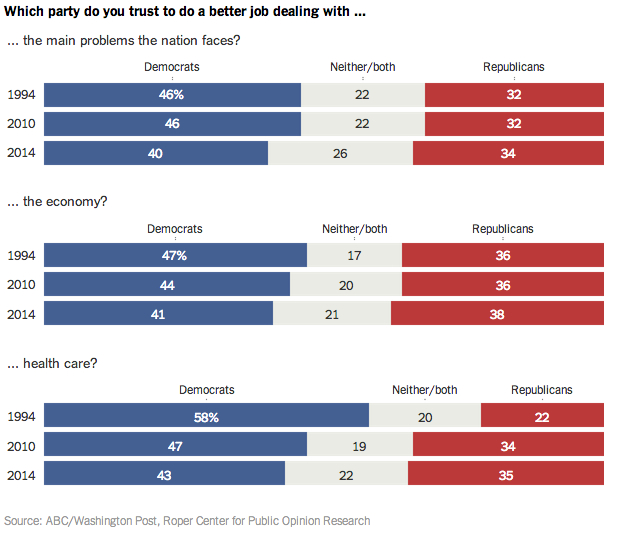 The biggest problem with these kinds of questions is that the electorate isn't made up of "voters". It's made up of people who actually go to the polls to vote. The Washington Post/ABC News poll found that Democrats actually have a one percentage point edge in voter intentions this year (which is, of course, inside the margin of error). But as Jaime Fuller notes, poll respondents who say they're "certain" to actually go out and vote look a lot more Republican.

Then there's what Nyhan calls "the structural factors." He names "presidential approval, the state of the economy, the type of election (midterm or presidential year) and the composition of the seats that are up for election." That last is particularly important this year. Democrats are defending 21 seats in the Senate to the GOP's 15. If that number was flipped — as it more than will be in the 2016 election, where Democrats are expected to be defending 10 Senate seats to the GOP's 24 — Democrats would be in much better shape.

But it's also worth acknowledging the limits of issue agreement. It might be rational for voters who agree marginally more with Democrats to nevertheless vote against Democrats. Perhaps they believe that the health law's implementation was botched, or that President Obama should have been more effective at finding agreement with congressional Republicans. Or perhaps they agree a bit more with Democrats, but nevertheless prefer Republicans hold substantial power in Washington.

If you dig deeper into the Washington Post/ABC News, that's exactly what you see. Voters say they agree with Democrats on everything from health care to gun control to abortion to the economy. But they still want to see Republicans in power to act as a check on Democratic overreach:

I would argue that in modern Washington opposition parties in general, and the Republican Party in particular, act less as a check than an immovable roadblock. But that's a reasonably new development in American politics and for voters working off the old model, where the opposition party really can be coaxed into cooperation by a sufficiently accommodative majority, it's perfectly plausible to both agree more with the majority party but vote for the minority party.