The Vox Lime Index: Lime prices are 65 percent higher than one year ago

Share All sharing options for: The Vox Lime Index: Lime prices are 65 percent higher than one year ago

By: Alex Abad-Santos and Danielle Kurtzleben.

The story of the American lime crisis — the limepocalypse, to those who know it well — continues, though prices have eased slightly. Gin and tonics continue to go lime-less, servings of pad thais are served with disappointing lemons, and the average price of limes remains 65 percent higher than where it was a year ago. However, the average price of a lime has slipped since last week, from 54 to 43 cents. 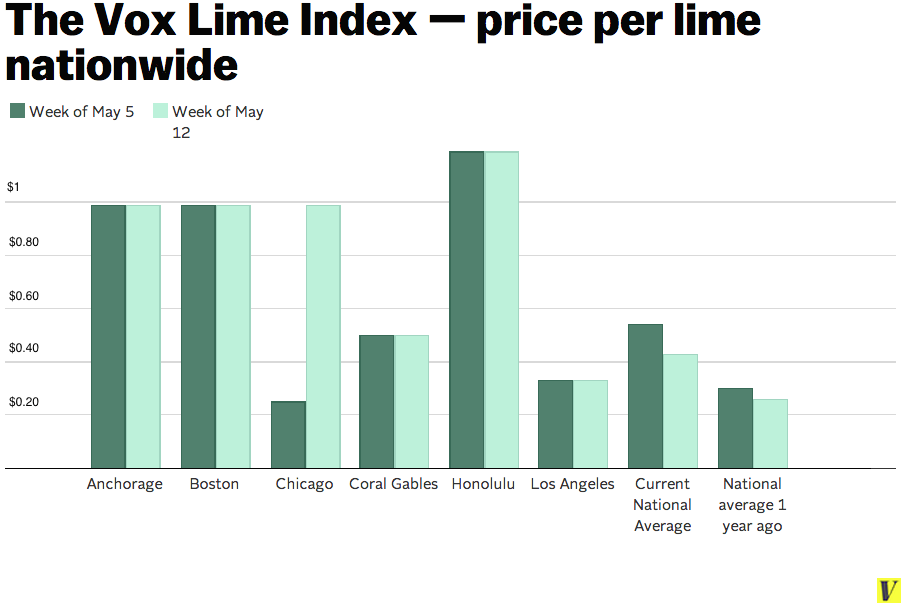 Like a terrible storm or that one elevator tape that everyone has seen by now, we're tracking the gory bits and grisly stories from the front line of America's limepocalypse. Today: the rivalry and contentious debate over the Rihanna of desserts, the key lime pie, and the effect on grocery store pricing.

The grocery store as investment portfolio

The lime shortage functions as a window onto the tricky business of pricing groceries.

"A stockbroker would see a supermarket as just a portfolio."

In a grocery store, he explains, the higher-margin products are located around the edges — the produce, dairy and meat areas. Those are like the stocks in the portfolio. Cans of soup and boxes of cereal, meanwhile, are lower-margin, and they sit in the middle of a store. Those are more like treasuries, which have a lower reward.

It's not exactly a perfect analogy; you can't hold a lime forever and hope it appreciates (hello, mold), for example. But the idea is that you generally expect bigger returns on limes and bagged salads than you do on canned green beans. But if you don't price that fresh produce correctly, it will go bad, and you will have wasted lots of money.

The question, then, is how a store handles it when it suddenly gets harder to make a profit on limes because their price has leapt.

That can create a conundrum for a grocery store. On the one hand, customers expect the price to go up because they see on the news that limes are outrageously expensive, explains Stanton. That means that while the lime shortage itself may not be great for a store, all of the news about it is, because it makes customers more willing to accept uber-expensive limes.

On the other hand, customers' expectations only go so far.

"If we were to charge what they're supposed to cost, they wouldn't sell," says Jackie Lunning, assistant produce manager at Bill's Family Foods in Forest City, Iowa.

Bill's Family Foods has marked limes up a bit, but they're not turning the kind of profit Lunning says the store usually sees. Thanks to being located in a rural area in Middle America, far from major cities, the store must pay a high price to even bring the limes in. Currently, Bill's Family Foods is paying around $1.19 for each lime it sells — more than customers pay limes at many big-city grocery stores — and is selling them for $1.99.

if you have an underperforming investment, you do have options

If you have an investment in your portfolio that is underperforming — that just can't turn much of a profit — you do have options, but those options depend upon your portfolio's mix of investments.

Different grocery store chains have different business models that rely on different parts of their portfolios: Whole Foods relies heavily on its produce as part of its brand, and its fruits and vegetables bring people in the door, for example. That means it might be worth more to have limes around at Whole Foods and just bump the prices up as needed. Meanwhile, a store that focuses more on lower prices might substitute lower-quality limes, which can cost a store less, or decide to dump limes altogether, or at least sell fewer.

"If you're a bottom-dollar [store] and limes are just outrageously priced, you probably just stop carrying them," says Stanton. "It makes no sense to put an expensive product in your produce that no one's going to buy," because it will end up losing money when it spoils.

So when you go to your local Whole Foods (or Bill's Family Foods) and shake your fist at the lime prices, think of your 401(k) and know that the people pricing the foods are just managing their own investments.
—Danielle Kurtzleben

John J. Meyer is almost the Walter White of the key lime industry. Meyer runs Kermit's Key West Key Lime shop, which specializes in key lime marmalade, key lime jam, key lime juice, key lime pies, and plenty of other key lime products. And given what we've heard about the lime shortage, you would think that he might be one of the people most affected by the lime shortage which has brought the United State to its knees.

"We're pretty well-insulated from it," he told me. "In the off-season, you pay the off-season price ...The restaurants who rely on the fresh key lime business — that's the squealing you're hearing right now."

Meyer buys frozen concentrate, shipped from California, bottles the Key Lime juice in DeLand, Fl. and then supplies online and to two, very famous gourmet shoppes in Key West. By buying frozen concentrate and also buying off-season limes and freezing the peel for things like marmalade, Meyer has barely been affected by the in-season rising prices of limes which could run him $80-120 a box. The only casualty has been Kermit's key lime marmalade which relies on key lime peel.

"We ran out about January," he said, explaining that he had to take it off the shelf but that his key lime jelly was still available. What's surprising to Meyer is amid all this lime chaos, is that the limepocalyspe hasn't put a premium on his juice (yet).

"I was hoping there'd be a real rise in the demand for juice," he told me, explaining that the last real surge for his lime juice was "right before Mother's day"— because of the ease of the pie, he told me, making one for your mother is something people (should) do.

The inevitable and nagging question for a key lime neophyte and reluctant baker, is whether or not the juice and where it comes from makes a difference when it comes to the pies. If you look at most of the recipes online, the ingredients don't vary much — key lime juice, eggs, sugar, sweetened condensed milk are the constants. The assumption would be that the juice is one of the key factors,

"The juice is just the same. It's not as showy," Meyer said. On the Kermit website, the juice is advertised as double-strength, meaning a more intense and concentrated lime flavor.

"If you line 3 people up, you get four different opinions," Meyer said, telling that the company makes between 40,000-50,000 pies a year. "We do it twice as strong as the natural key lime.You get a tart-er pie. That's the real key lime pie. you want a tart pie. It's a stiffer pie. We don't have many people push it back across," he added.

On the other side of the spectrum is Steve Tarpin, who runs Steve's Authentic Key Lime Pies in Red Hook, Brooklyn. Tarpin relies on fresh key limes to make his famous pies and run his business. And because of his reliance on fresh product, the limepocalypse has hit him pretty hard.

In recent weeks, Tarpin has had to raise the price of his pies by 14 percent.

Of course this increase has to be passed on to our customers, which we’re not happy about

"The tripling of the lime cost had a tremendous effect on our costs," Tarpin wrote over e-mail. He explained that the company had frozen stock which saw them through six weeks. But it wasn't enough to save them from the price hike."The supply line has reopened and the price has steadied, but still well above what we were paying previously. Of course this increase has to be passed on to our customers, which we’re not happy about, so it causes us to seek additional ways to reduce our cost," he added.

The key to Tarpin's limes is the freshness. He tells me that according to the American Pie Council, Tarpin's bakery is one of only two commercial bakeries using fresh-squeezed limes.

So how does this affect the pie? Tarpin, in a boss-move, didn't tell me about his pie. Instead he linked me to his TripAdvisor reviews and fired off a pithy sentence. "Best described by others," he wrote.

The reviews, of course, are glowing. There's seemingly nothing magic about the recipe either. The recipe is only five ingredients and came from the back of a one-pound bag of key limes.

In terms of supply, Tarpin said the supply lines have opened again and received a 3,000 lb. shipment of limes a few weeks ago. He sent me this picture of his precious fruits: