The good, the bad, and the ugly of Narendra Modi, India's next leader

Share All sharing options for: The good, the bad, and the ugly of Narendra Modi, India's next leader

The results from India's national election are still coming in and it's already clear who will be the country's next leader: Narendra Modi. His party, the BJP, has won at least 280 of the parliament's 545 seats, giving it a controlling majority (not to mention a stunning election victory) and enough to formally install Modi, who is their candidate for prime minister.

Modi is a big deal. He's about to take control of the world's second-most populous country at a pivotal moment in its history. He's hugely popular in India, where his party won by huge margins in large part on enthusiasm for what Modi can do for the nation. But he's also extremely controversial, in India and abroad; so much so that the State Department once denied him a visa to even the US. Here is a brief rundown on the good, the bad, and the ugly of India's next leader.

The good: Modi could be the guy to save India's economy

Lots of Indians, as well as members of the international business community, think his background as Gujarat's leader make him qualified to fix India's economic woes, and he's styled himself as India's national CEO. Optimism about a BJP win has been powering the Indian stock market to new highs this spring. The value of India's currency, which plunged last year, has been rising in 2014 again thanks to Modi-mania. 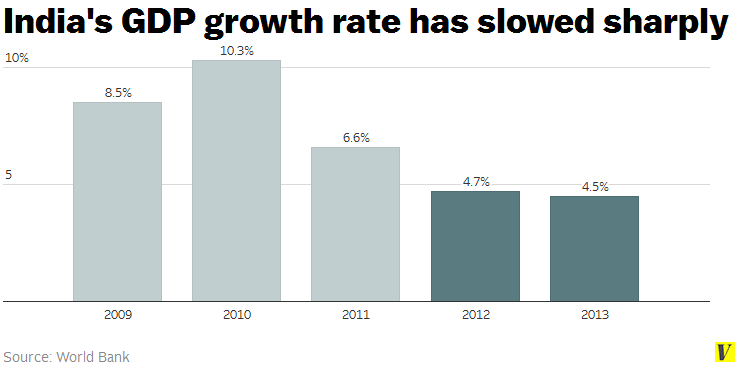 There's a lot of demand in the Indian economy, but not enough supply, and India's poor infrastructure and weak governance have been unable to provide the needed increase in production of goods and services. That's meant higher prices — inflation — without enough growth.

Modi's supporters believe he'll be able to fix this by implementing cleaner governance, by cutting down on the corruption and bureaucracy that prevents businesses from growing, and by improving infrastructure so that business can sell more products domestically and abroad.

It's tough to say whether Modi would be successful. The stated economic platforms of his party and the incumbent Congress Party are not particularly distinct, particularly on corruption and infrastructure. Still, Congress has been in power for a while so it tends to take the blame for the status quo. Many Indians believe that Congress has failed and it's time for a change.

The big question, then, is whether Modi would be able to reproduce his reputation as an economic miracle worker from his time running Gujarat state. The numbers are impressive, but some analysts argue not nearly as impressive as Modi presents them to be.

The bad: Modi has a history of stirring up religious tension, of which India already has way too much

Modi's rise also reflects a worrying trend of Hindu nationalism in India, and Modi himself has a record of stirring up Hindu-Muslim animosity. That can be a sensitive, and sometimes deadly, issue in India. Fears about Modi's record of creating religious tension are so high that The Economist published a cover story urging Indians to vote against him. "By refusing to put Muslim fears to rest, Mr. Modi feeds them. By clinging to the anti-Muslim vote, he nurtures it," the magazine warned.

Hindu nationalism is a movement of right-wing nationalism and social conservatism combined with a Hindu political identity so strong that its ultimate effect has been described as, if not Hindu supremacy, then Hindu hegemony to the potential detriment of the 20 percent of Indians who are not Hindu. That often means Muslims.

"This is the time to avenge"

There is a specific incident that people often cite when talking about Modi's Hindu nationalism: the 2002 riots in Gujarat. A year into Modi's tenure running the state, mass Hindu riots broke out against Muslims and an estimated 1,200 people, most of them Muslims, died in the violence. Many reported the police of the state did nothing to stop the attacking mobs, and Modi and his government have long been accused of allowing, and potentially abetting, the riots.

This is not a fringe conspiracy theory: the US State Department denied Modi a visa to visit the US in 2005 over his suspected role in the incident.

A few months after the riots, New York Times reporter Celia Dugger asked Modi if he wished he handled the riots any differently. He told her his greatest regret was not handling the media better. Dugger said in a Times video interview that Modi did not show "any regret or [express] any empathy for those who had been slaughtered in his state, on his watch."

This is not all in the past. While Modi has scaled back the rhetoric that's drawn so much criticism in the past, there are still flashes of it — perhaps in part because he needs Hindu nationalists' votes. For example, he's made speeches condemning India's beef export industry. This may sound innocuous, but within India it's a clear dogwhistle aimed at the Indian Muslims who dominate the beef industry, and meant to stir up Hindus who find beef consumption religiously objectionable. As the Financial Times pointed out, it's exactly the kind of rhetoric that has led to communal violence in the past.

More worryingly, a video has surfaced showing Modi's top lieutenant at a private election gathering in a part of India that has seen recent Hindu-Muslim violence. He told the Hindus gathered that voting for Modi would lead to "honor and revenge" for the killings.

"This is the time to avenge," he said. It's a bit like Mitt Romney's 47 percent video — except instead of belittling welfare recipients, the Indian official appeared to be hinting at the need for religious reprisal killings.

The ugly: Modi may end up being more status quo than change

Modi is the change candidate, for better or worse: the story here is in many ways as much about the incumbent Congress Party's failure as about his success. Congress Party is the ultimate political establishment — it's the Gandhi family party and has controlled India's government for most of its history since breaking from British rule.

Indians voted out the Congress Party because they were fed up with its economic mismanagement and corruption, and voted in Modi because they thought he would change things. But the Indian government is one of the world's largest bureaucracies  and it is dealing with tremendous and very basic problems at every level: things like safely distributing school lunches, or installing plumbing and electricity in rural areas, are enormous challenges for India.

It's entirely possible that Modi, whatever his differences in temperament from the old Congress Party leaders, will be subsumed by India's vast bureaucracy and by the country's many little problems, and that his rule will be more status quo than either his supporters or critics suggest. It's always easy to overestimate the good and the bad of a new government, but often those governments express a lot more policy continuity than they intend. But we'll all find out soon enough, for better or worse.