We're living six years longer than we did in 1990

Share All sharing options for: We're living six years longer than we did in 1990

People around the world are living a lot longer than ever before.

A new report from the World Health Organization (WHO) charts the improvements made just in the past couple decades, and the gains are huge. A baby girl born in 2012 can expect to live an average of 72.7 years, compared to a baby boy who can expect to live to 68.1 years. That's a six-year gain since 1990.

The global average doesn't tell the whole story. Low-income countries, for example, made considerably larger gains than the rest of the world in the past two decades.

But low-income countries still have a long way to go

While these gains are great, low-income countries are still mostly playing catch-up in the global health disparity. 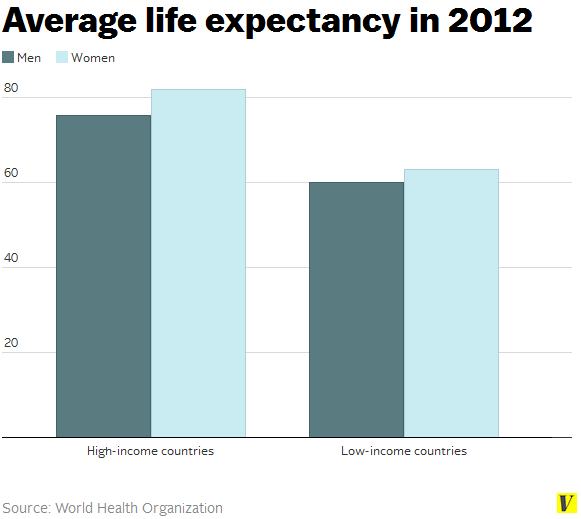 So people in low-income countries are living much longer than they used to, but they still need to gain a full 15 to 19 years of life before they catch up with the most developed nations. That's one reason global aid efforts, like those to get vaccines to poorer countries, are widely seen as crucial: a lot of people in low-income countries are dying from health conditions that the wealthy world can easily treat and prevent.