The bike to work community is growing fast, but it's far from mainstream in the US

Share All sharing options for: The bike to work community is growing fast, but it's far from mainstream in the US

New American Community Survey data from the Census Bureau shows that the number of people who say they bike to work as their normal mode of commuting has surged over the past decade, making it the fastest growing form of transportation: 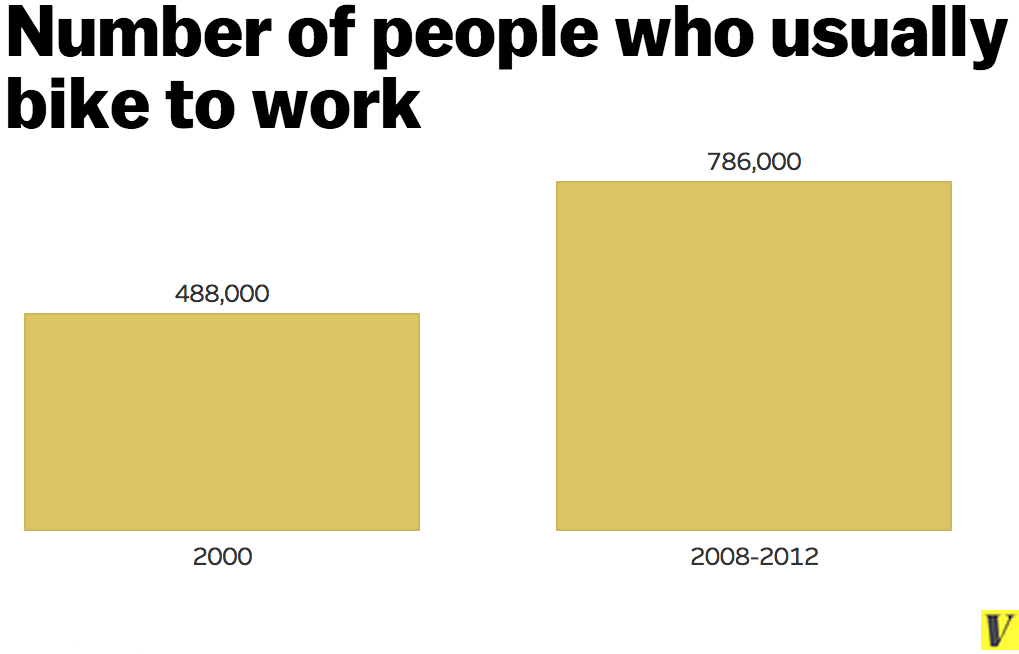 But despite the rapid increase in cycling's popularity and its high profile in the media, it remains very much a niche pursuit in the United States: 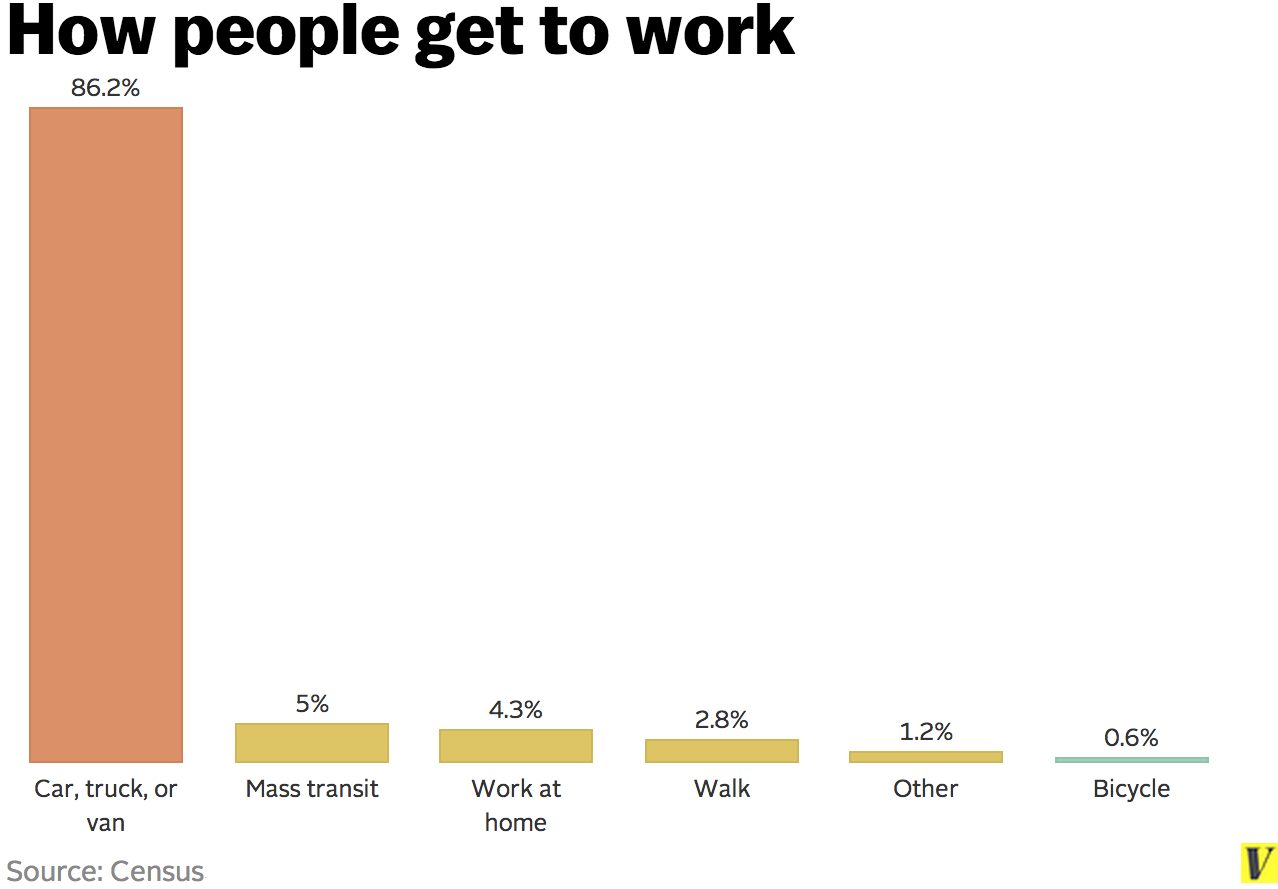 Cycling is substantially less popular than even the mysterious "other" commute mode.

One reason may be that despite recent pro-cycling moves in a number of cities, the United States lags far behind other developed countries in promoting bike-friendly infrastructure. The consulting firm Copenhagenize publishes an annual index of the most cycling-friendly cities in the world, and exactly none of them are American: 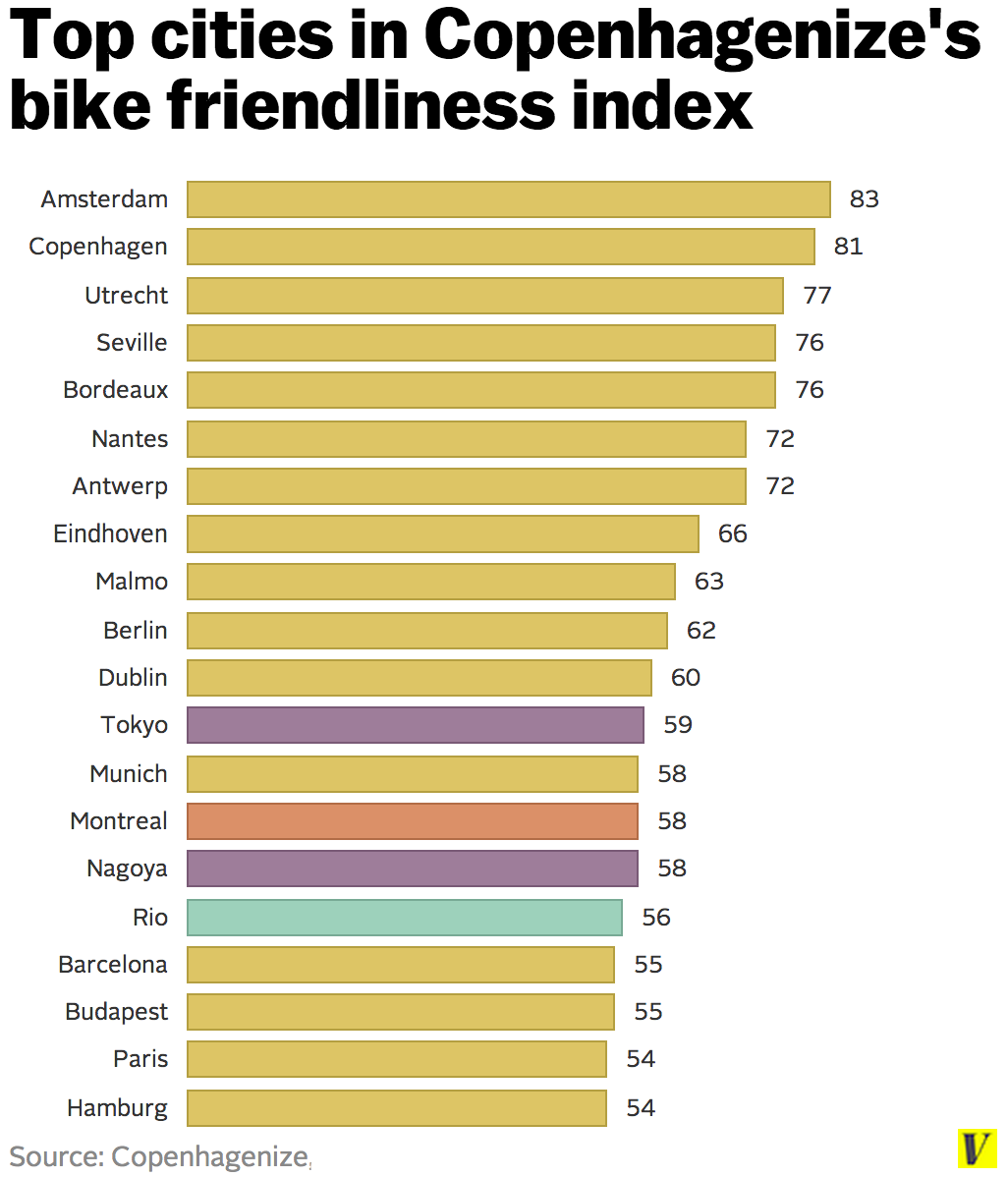 Europe dominates the bike-friendliness index, but Japan, Brazil, and Canada also have representation.

Looking at specific American cities, you can see that local conditions make a big difference to cycling. In Portland, biking is ten times more prevalent than its national average: 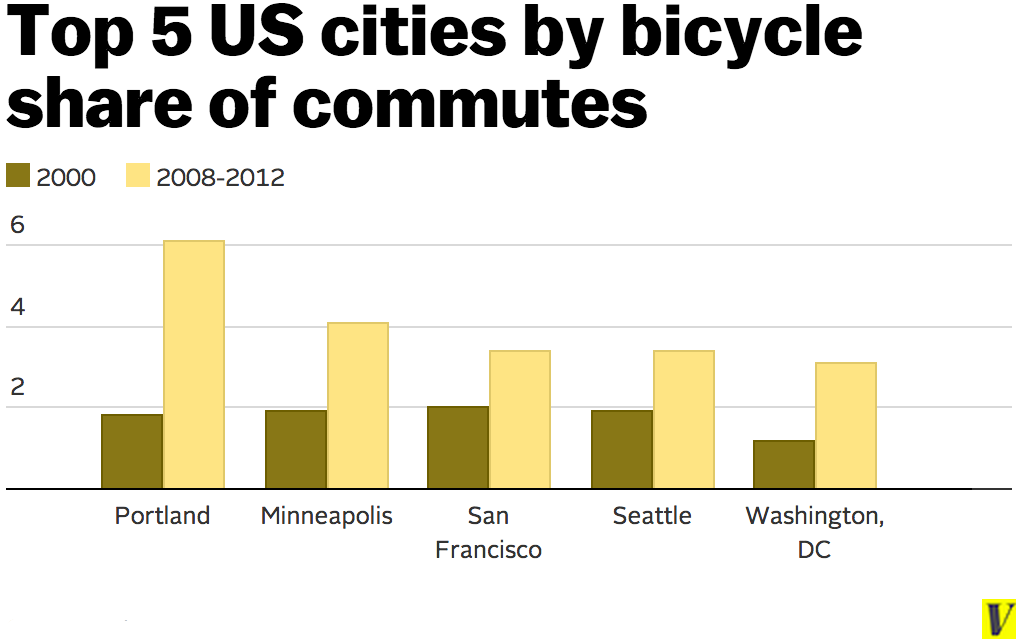 You can also look at bicycle mode share by state, showing that it's generally more prevalent in the west and least popular in the south: 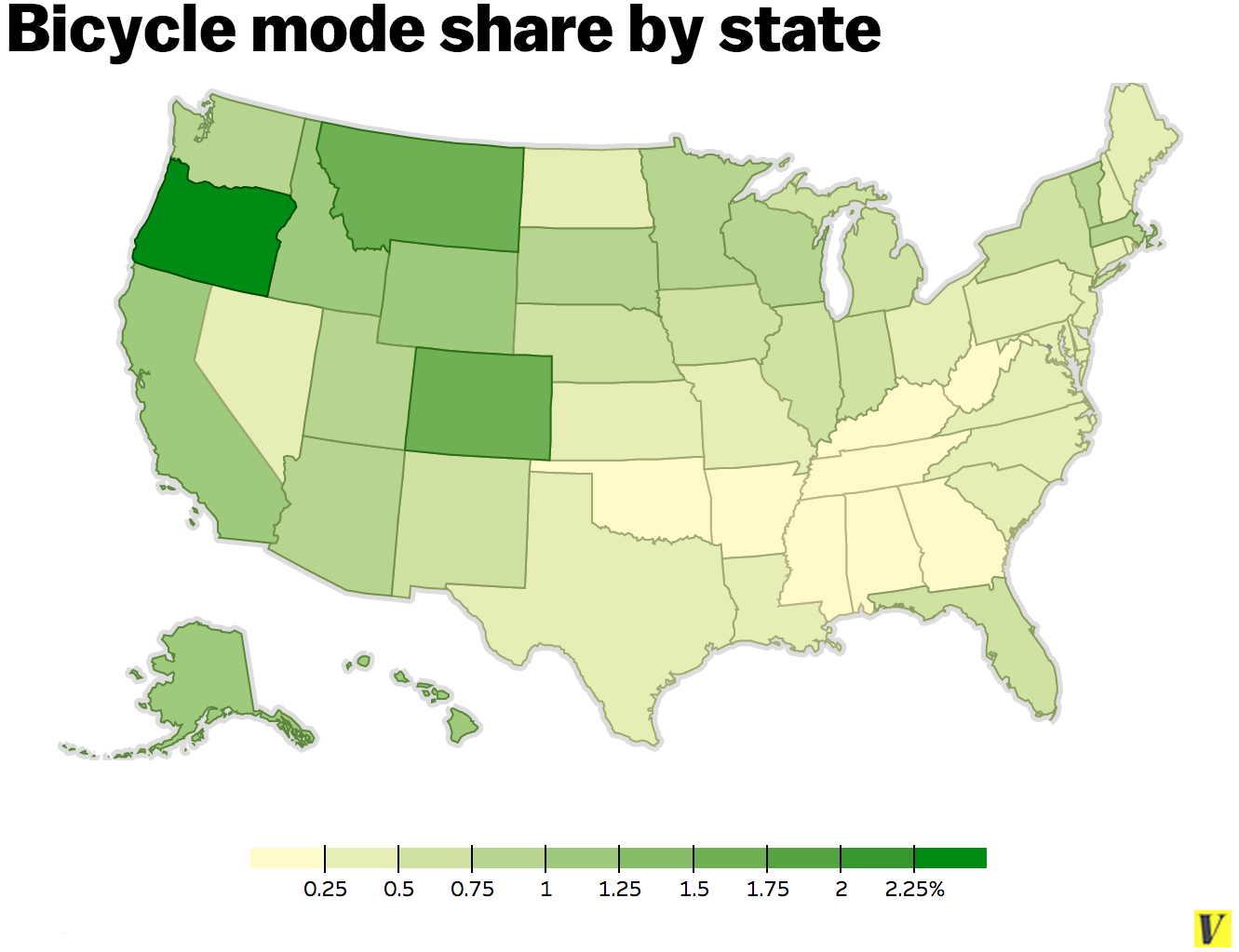 In global terms, however, even America's top biking cities have very few cyclists. Unfortunately, no international organization maintains a comprehensive worldwide index of commuting mode shares. But Wikipedians have cobbled together a list from several different data sources and it shows that cycling is most popular in small-to-midsized northern European cities and a couple of giant Chinese ones: 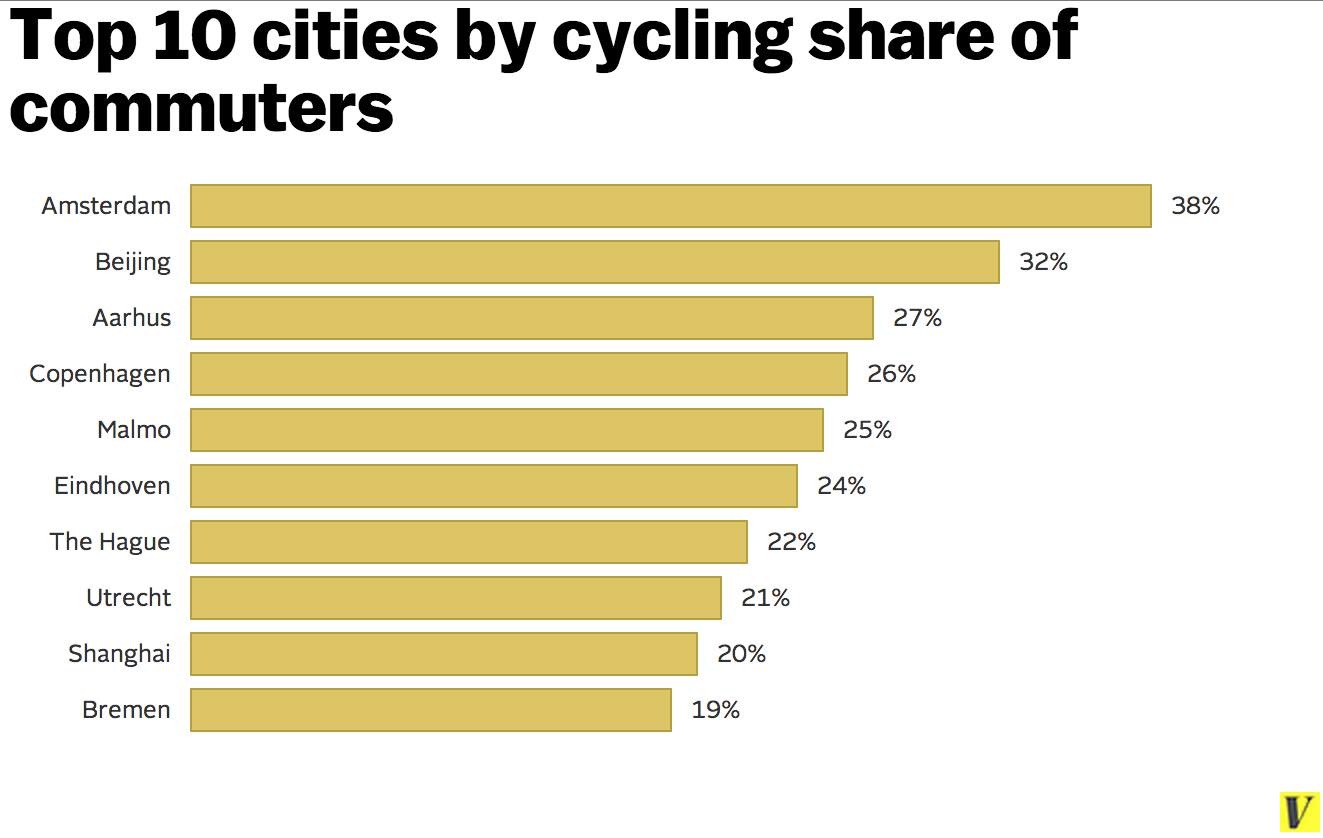 Since many more people live in Beijing and Shanghai than in Amsterdam and Copenhagen, it seems likely that global bike mode share is falling as Chinese people buy cars even while it rises in some western countries.

But even as cycling gains popularity in the United States, the bad news for American cyclists is that our roads are much less safe to bike than those of many comparable countries: 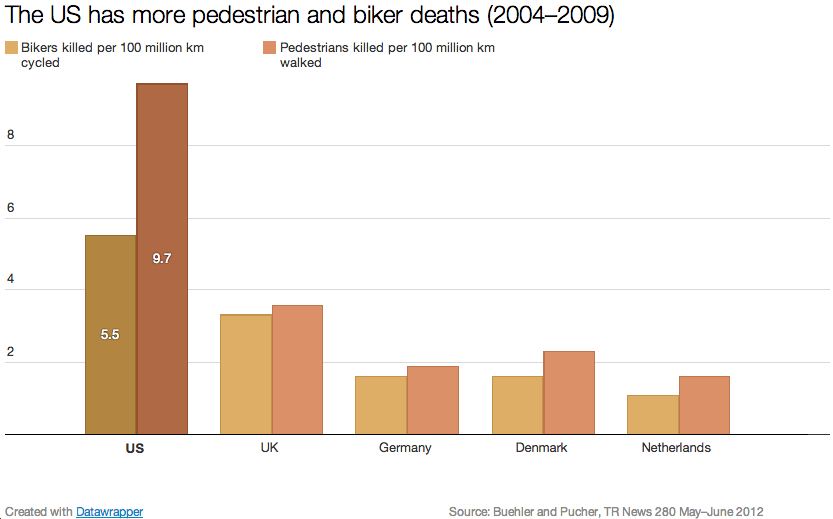 One way to improve things might be to reform traffic laws to let cyclists roll through stop signs.