A depressing new study led by Dartmouth College researchers shows that some female politicians might face an additional obstacle at the polls in conservative states — their physical appearance. Specifically, when people can more easily categorize a female politician as female, she'll usually do somewhat better in elections. If people have a harder time categorizing her, she often does worse. There was no similar effect for male politicians, or for female politicians in liberal states.

Dartmouth psychology professor Jon Freeman and his four co-authors were interested in facial cues — what happens in the milliseconds that pass as people see a face and try to process it. They started by showing people, on computer screens, images of politicians' faces: 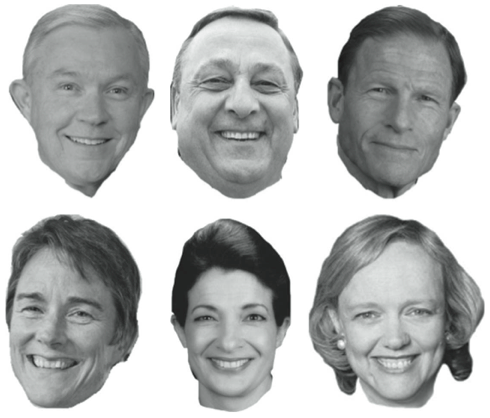 There's existing research showing links between facial cues and electoral success — politicians with faces judged as more attractive or more indicative of competence have been linked to better poll performance. But this new study explores cues that are perceived to indicate masculinity or femininity specifically. These cues can be biological or social. For instance, long hair and makeup are often perceived in Western cultures as cues for femininity, but a heavier brow is not, according to the study's authors.

In conservative states, the candidates whose faces were interpreted as more feminine did better in elections

To see if there's any link between these cues and electoral performance, participants in an experiment were asked to quickly categorize each politician as masculine or feminine, based on a quick glimpse of his or her face. The participant must move the computer's mouse and click either "Male" in the upper left, or "Female" in the upper right. You can watch a animation of the process here.

People almost always click on the right answer — but they vary in how quickly they do so, and in how directly they move their mouse toward it. For instance, the pink mouse path below (for the face on the right) moved more directly and quickly toward the "female" box, than the blue mouse path (for the face on the left). Each face was presented separately and in the same position, but they're both included in his image for clarity. 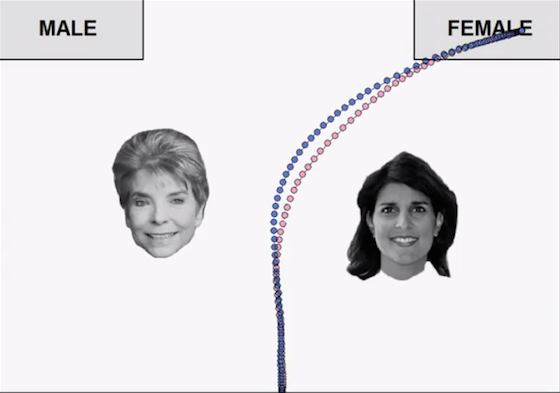 We're talking very small differences here, but they are measurable. The study's authors say the blue mouse path indicates more gender uncertainty in the facial cues people are perceiving from the politician on the left. Could this metric have any impact on electoral performance?

The researchers tested 260 participants scattered across the United States to get gender uncertainty estimates for each politician. Then, they looked at the politicians' actual results in elections — how many percentage points they won or lost by.

It turned out that, for male politicians, there was no evident connection between gender uncertainty (as indicated by mouse paths) and electoral success at all. Furthermore, it had no identifiable effect in liberal states. But in conservative states, the candidates whose faces were interpreted as more feminine tended to do better. "In real-world elections," the authors write, "the weight afforded to gender typicality for electoral success persists only among those who more strongly value gender typicality: conservatives."

The study only uses pictures of 80 female politicians, between 1998 and 2010. So the number of politicians who ran in conservative states that we're looking at is really rather small. Furthermore, it's possible that female candidates who are more likely to win will pay more attention to managing their image, and will therefore release more flattering official photos (though this was apparently not the case in liberal states). The study's authors also write that, though they did try to control for this, the experiment's participants could have had some vague familiarity with the the images of successful female politicians — which would lead to them more easily recognizing their faces as female.