Honeybees in the United States are still dying at alarmingly high rates, putting billions of dollars of crops at risk.

But here's some good news for a change: Fewer bees died in the winter of 2013-14 than the average over the past eight winters. What's more, there are at least a couple of early, tentative signs that commercial beekeepers are getting a better handle on bee deaths.

While it's way too early to say that honeybee deaths are declining for good, the news is at least encouraging. Honeybees help pollinate $15 billion worth of crops in the United States each year — including apples, berries, cantaloupes, cucumbers, and almonds

The decline in winter bee deaths was noted in an annual survey of commercial beekeepers released by the U.S. Department of Agriculture (USDA) and the "Bee Informed Partnership." The red bars show total losses, while the blue bars show what beekeepers consider "acceptable" losses.

Honeybee deaths declined in the winter of 2013-14 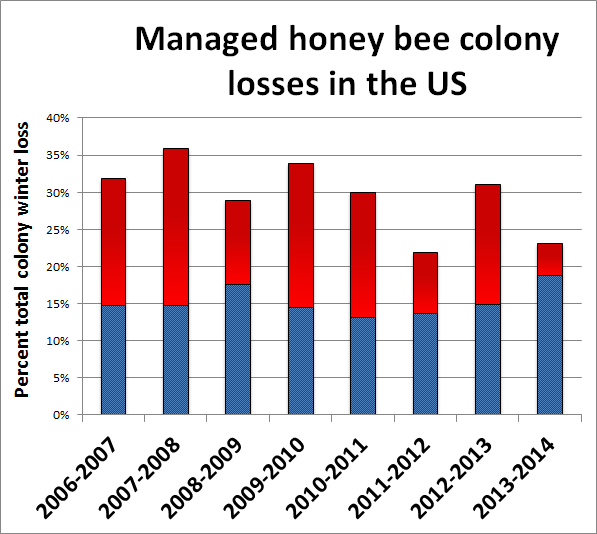 Total overwinter colony loss (October 1 - April 1) of managed honey bee colonies in the US across the 8 annual national surveys (red bars). The acceptable range (blue bars) is the average percentage of acceptable loss declared by the survey participants.

To be sure, that's still an extremely high rate. And this might just be a one year dip — as happened in 2011-12. Researchers still aren't sure why, exactly, fewer honeybees died this winter.

But there are a few key points here:

1) The mysterious "colony collapse disorder" — in which lots of bees would simply vanish from their hives during the winter without leaving corpses behind — seems to have abated over the last three years and is no longer a big factor in bee deaths.

The mysterious 'colony collapse disorder' seems to have abated

2) Instead, bees now seem to be dying from a combination of different stresses: The main killer during the winter now seems to be the parasitic Varroa destructor mite, which feeds on the blood of worker bees and the brood, shortening their life span.

But other factors may also be contributing to bee deaths at other times of the year — some 20 percent of bees are still dying during the spring and summer. Some newer pesticides may make honeybees more susceptible to infections. Poor nutrition caused by a lack of crop diversity may also be hurting the bees.

3) There is some encouraging news here: If the Varroa mite is, in fact, the main issue, it may be stoppable. In the previous winter of 2012-13, a separate survey found that beekeepers that treated their colonies for mites lost 26 percent fewer colonies than those that didn't. (It's not known yet, though, if widespread treatment was the reason that overall losses fell in the winter 2013-14.)

4) Pesticides, meanwhile, are a more contentious issue. In the European Union, regulators have banned a new class of pesticides known as neonicotinoids for the next two years — to see if honeybee colonies benefit. US regulators, meanwhile, say that further field research "is required to establish the risks associated with pesticide exposure to U.S. honey bee declines in general."

5) That all said, the overall situation is still troubling. Back in the 1980s, before the Varroa mite began killing honeybees, acceptable losses were typically 5 to 10 percent. Nowadays, losses of 23 percent count as good news.

* Update/Correction: The USDA chart has been corrected and updated (an earlier version had incorrect data for the winter of 2011/2012).