A fire tornado formed yesterday in California — here's how it happened

Share All sharing options for: A fire tornado formed yesterday in California — here's how it happened

Yesterday, as several wildfires burned in and around San Diego, firefighters spotted a remarkable natural phenomenon: a firenado.

In the suburb of Carlsbad, a 100-acre fire spawned a few different fire tornadoes, and several were caught on tape:

Luckily, the fire hasn't caused any deaths, although in total, about 23,000 people have been evacuated from their homes in San Diego county, and more than 1,500 acres have burned. The fire still hasn't been contained, and officials expect it to get worse.

It's clear what caused the fire: extremely hot, dry conditions. On Wednesday, humidity was at three or four percent, and temperatures hit 100 °F.

But what caused these firenadoes to break out?

As crazy as they might seem, what's surprising is that firenadoes like this, though rare, certainly aren't unprecedented. They aren't unrelated tornadoes that randomly got sucked into a fire, but twisters created by the fire itself.

Unlike large, destructive tornadoes — which form as a result of powerful air currents inside giant thunderstorm clouds called supercells — fire tornadoes are small, and are generated due to very localized conditions. In terms of scale, they're more like waterspouts or dust devils than proper tornadoes.

These aren't unrelated tornadoes sucked into a fire, but are caused by the fire itself

Generally, they start when strong winds are already present near an especially hot wildfire. The fire generates big differences in air temperature over a short distance, and because hot air is much less dense than cold air, cooler air gets sucked in to the hotter areas. This can mean that different wind currents are flowing in different directions, causing a whirling eddy of air to form, which spins faster as it moves upward.

If this eddy comes in contact with the fire, it can burst into the flames in a few different ways.

Most often, the cyclone sucks carbon-rich gases, produced by burning plants, upward. At ground level, these gases might not come into contact with enough oxygen (needed to fuel a fire) to burn, but once they're aloft, they mix with fresh oxygen and start burning suddenly.

Once this happens, the extreme temperatures of a fire tornado (as high as 2,000°F) can be hot enough to re-ignite ash that's been sucked up from the ground — and mixed with fresh, oxygenated air — as well. 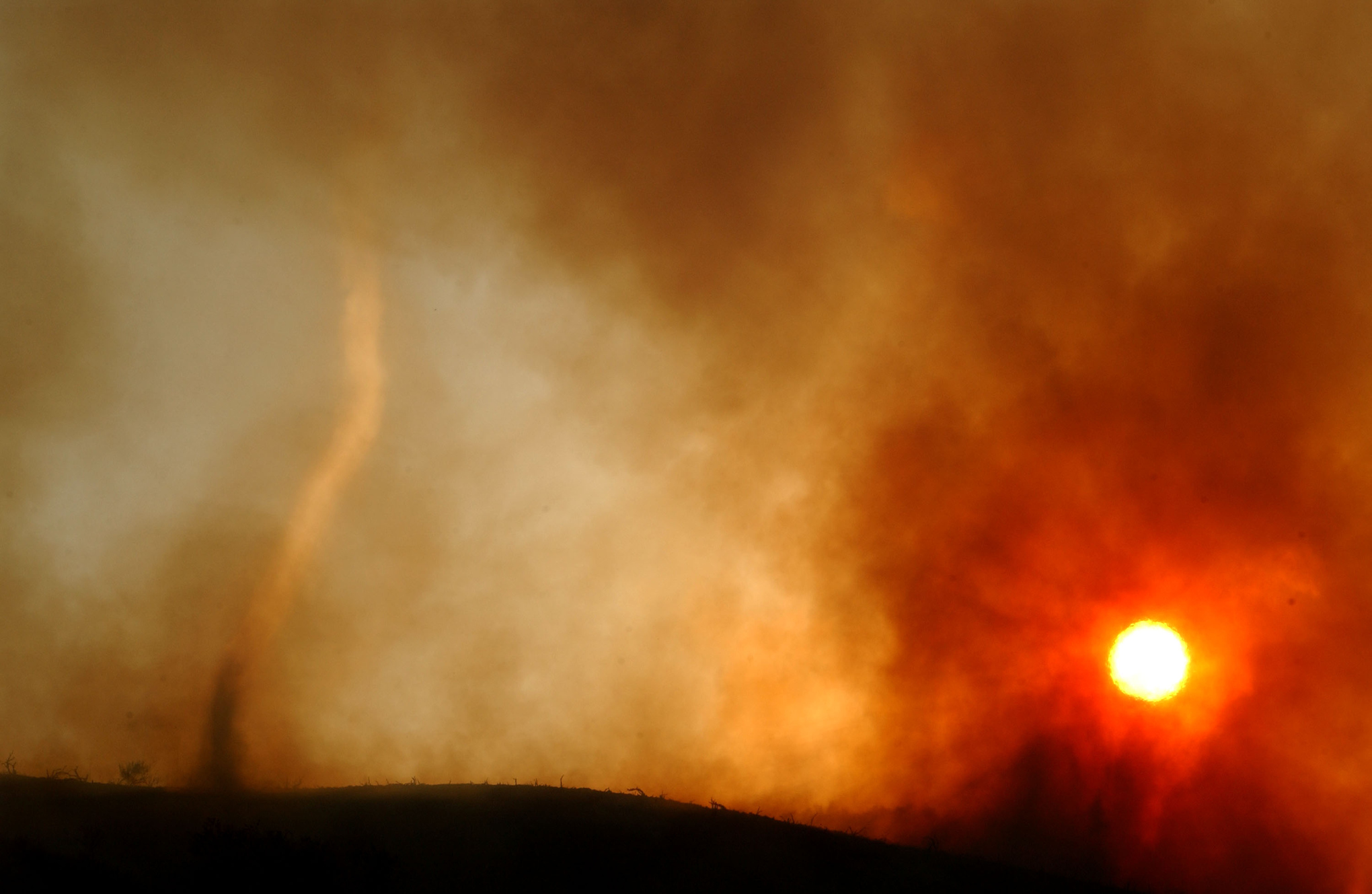 All this forms a spinning core of fire, accompanied by a rotating column of air that surrounds it and provides oxygen.

Compared to normal tornadoes, these fire tornadoes move pretty slowly, and can often seem almost stationary. The conditions that spawn firenadoes most often occur at the fronts of moving wildfires, and in hilly areas, where perpendicular air currents are most likely. The tornadoes are usually narrow (a few feet wide) but can be as much as 100 feet tall.

Luckily, they generally last for just a few minutes, or an hour at most. But they're extremely difficult for firefighters to put out, so if one forms at the wrong location, they can cause extremely heavy damage.