Share All sharing options for: College grads without student debt are 7 times wealthier than their indebted peers

Kids who go to college can expect bigger future paychecks than non-grads, and many will have a better chance of climbing above their parents on the economic ladder. But according to new data, it's clear that parents who can afford to send their kids off to university without debt set their kids up for a much more comfortable future. So while college has an equalizing effect to an extent, massive wealth inequality persists between the debtor and non-debtor classes of college grads.

It's not just that some people graduate with debt bills and some don't; people saddled with student debt also tend to have fewer assets, according to a new report from the Pew Research Center. Among households where the householder was under 40 and college-educated, households with debt had a median of $148,500 in assets as of 2010. That's 25 percent less than households without debt, which had $197,000 in assets. 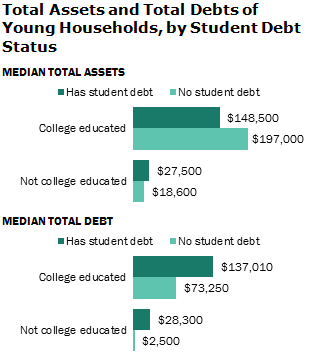 And it's not that people with student debt are making less money than people without debt. In fact, Pew finds college grads with and without debt have identical median household incomes — around $57,900. 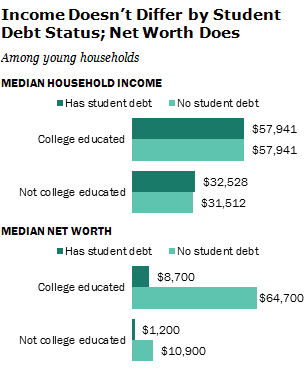 And altogether, the median young college-educated debtor has around one-seventh the total net worth of the median graduate with no debt.

Part of this may be that students that graduate without debt may come from wealthy families, which can mean they have accumulated wealth from their families, like via inheritance.

However, there are likely other factors at work, stopping student debtors from accumulating more assets, says Richard Fry, senior economist at the Pew Research Center.

"It is not because they are less likely to own a home or a vehicle. The difference more has to do with financial assets," says Fry in an email. He suggests that debtors might be less likely to invest in workplace retirement plans.

Though Pew's data aren't conclusive on this point, it isn't a new idea that student debt might dissuade grads from saving for retirement. A 2013 study from Washington University, for example, found that graduates with student debt had half as much money in retirement savings as those without student debt.

And because retirement accounts feature compounding returns, that means the retirement security of people without debt can be exponentially better than those with debt.

What this emphasizes is that two students who graduate with equal qualifications may be of equal value to the working world. But if one is a debtor and one is not, these two people will end up with vastly different net worths.