Can Medicare save this Southern Democrat's career?

Share All sharing options for: Can Medicare save this Southern Democrat's career?

On Monday, a new poll was released showing a 10 point Democratic lead in the Arkansas Senate race, one of the most competitive in the country. The large margin could well be an outlier, but the trend appears to be genuine — most recent polling shows Senator Mark Pryor retaking the lead from his Republican challenger Congressman Tom Cotton. Cotton, an Army veteran and Harvard Law School graduate, was widely heralded as the GOP's most impressive Senate candidate this year, and a potential party rising star. 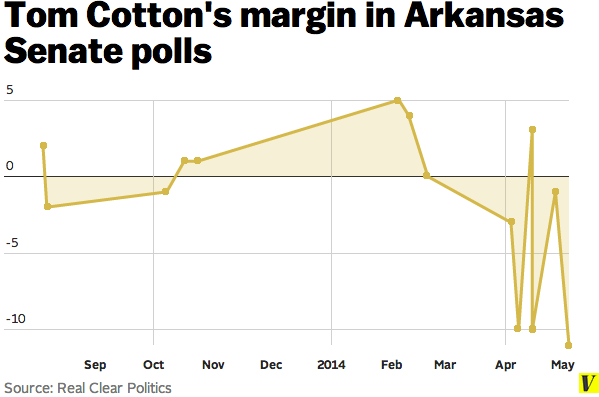 It's impossible to say for sure why the race has turned around, or whether the trend will last. But it's noteworthy that recently, the Pryor campaign has been aggressively advertising on just two issues: Medicare and Social Security. Cotton "voted to raise the age to Medicare for 70," one narrator intones. "Cotton would raise Medicare and Social Security to 70. Look it up! He's a real threat to your retirement," says an older woman named Linda. In another ad, Pryor himself says he wrote a bill to "stop politicians from destroying Medicare," and helpfully adds, "My opponent voted to withhold benefits until age 70. And I'm trying to stop that." The Pryor campaign has spent hundreds of thousands of dollars airing these ads in the past month.

Attacks against Republicans for supporting Paul Ryan's budget are nothing new. Yet the most damaging claim here is that Cotton supports raising the beneficiary age to 70 — something Ryan's budget specifically avoided doing. (It raises the Medicare age only to 67, and doesn't even touch Social Security.)

But Cotton is in this hot water because he voted for a budget even further to the right than Ryan's. In early 2013, some conservatives were unhappy that Ryan's latest proposal took 10 years to actually balance the budget — that is, to eliminate the yearly deficit. So the Republican Study Committee proposed its own plan, that balanced in just 4 years. To do so, it had to include major entitlement cuts that Ryan had backed away from, and include them more quickly. But it also proposed that crucial hike of the Social Security and Medicare eligibility ages to 70, starting in 2024.

The vote became an important litmus test for conservatives worried about their budget-cutting credentials. Groups like Heritage Action said they'd "score" it — which meant they'd deem candidates opposing it less conservative. And so that March, when Cotton was just two months into his first Congressional term, he voted for it. Now Pryor looks set to hammer home that one vote for the rest of the campaign.

Interestingly, when the vote on the RSC's budget actually took place, House Democrats decided to vote "present" rather than against. The thinking was that because the proposal was so extreme, the GOP would have to split its votes to prevent it from passing — which they did. It's a move that was good for embarrassing the GOP in the short term, and earning press clips about Republicans in disarray — but the tactic actually led fewer Republicans to be on record backing the proposal. If Pryor's campaign strategy is truly working, the smarter play may have been to let as many Republicans as possible vote for it.