Share All sharing options for: Why Europeans still love the EU after it took all their jobs

The Pew survey surveyed seven of Europe's biggest countries (Spain, Britain, France, Germany, Italy, Poland, and Greece), while the EU survey, a special version of the well-respected Eurobarometer poll, took all 28 European nations' temperatures. On the surface, both polls told us what we'd expect: as the Euro crisis has receded, Europeans have grown less pessimistic about the economy. As the economy's gotten better, they've felt better about the EU.

Nothing surprising there. But it's what's going on below the surface in the polls that's really interesting. Europeans remain really skeptical of the EU's economic role, but still have overall positive views about the Union. That seems to be because of the EU's role in cementing European unity and peace.

In the Pew poll, Europeans reported some pretty intense skepticism about the EU's impact on the European society and economy. The median scores for questions like "does the EU promote prosperity?" are pretty dismal. Citizens of the EU's most important countries see the Union as out-of-touch, inefficient, and far too intrusive. 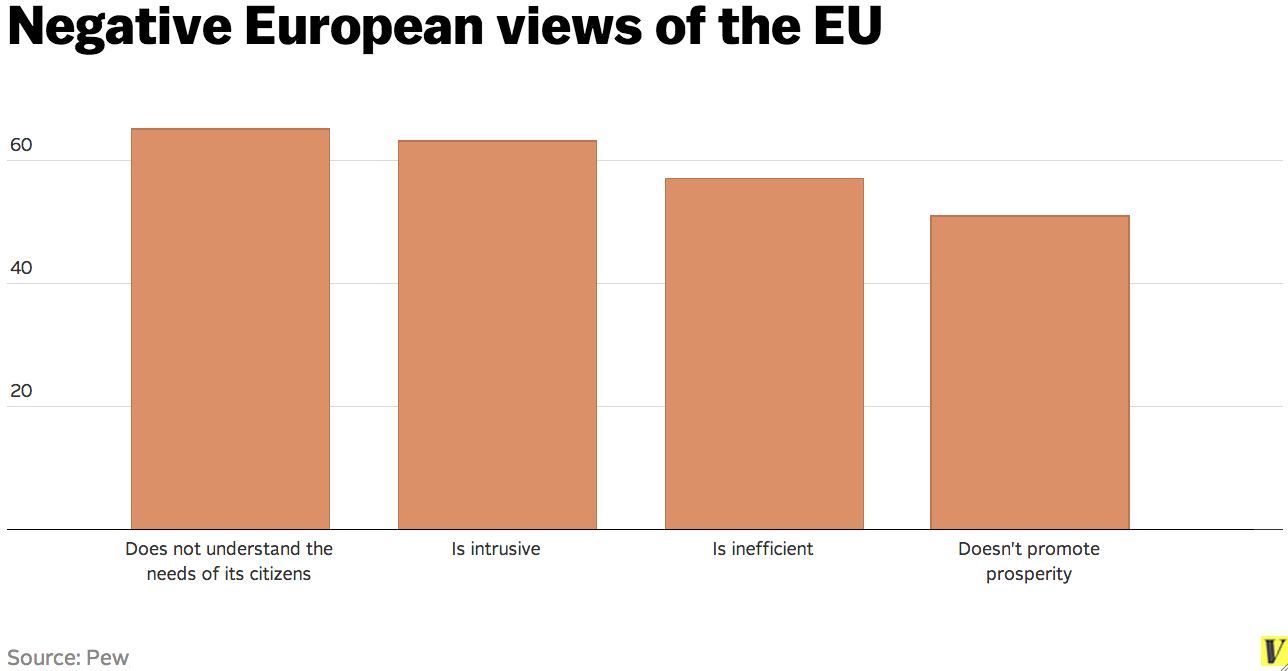 And yet, a majority of Europeans (52 percent) had a favorable view of the European Union. Considering that only 38 percent believe that European integration has strengthened the EU, as well as the above charts, it doesn't make sense that a deep faith in the EU would be powering this.

And, indeed, it likely isn't. The overwhelmingly most favorable finding in the Pew is about whether the EU "promotes" peace — an overwhelming median of 70 percent answered in the affirmative. 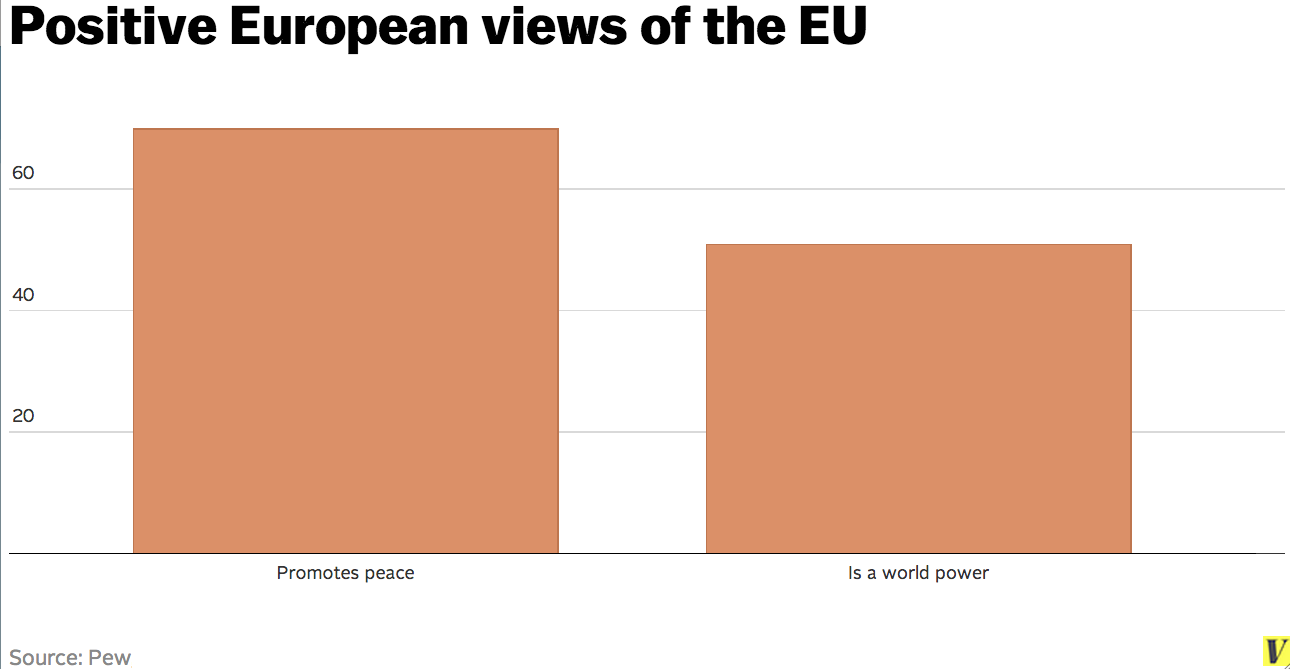 Europeans believe that the EU is helping prevent a return to the sort of Europe that existed for centuries before 1945: a nasty place characterized by a lot of internecine bloodletting. So they're willing to put up with a certain amount of poor economic management, even when it's borderline catastrophic.

Europeans wouldn't be crazy for worrying about this. In 1990, renowned international relations scholar John Mearsheimer wrote a paper titled "Back to the Future: Instability in Europe after the Cold War." Mearsheimer predicted that things were destined to "return to a more violent Europe," including, among other things, the collapse of NATO and the emergence of a militarily assertive, nuclear-armed Germany. Without a shared enemy in the Soviet Union, Mearsheimer predicted, Europeans would turn on the American presence in their continent and then on themselves.

Mearsheimer's paper turned out to be one of the most spectacularly wrong essays in the history of international relations. The reasons for why are interesting and help explain the poll numbers above. A lot of it has to do with the European Union's resilience: the EU promoted trade ties, making war between European powers more costly, and created a shared European national identity, making the idea of war between Europeans morally unthinkable. So when Europeans say the EU "promotes peace," it may mean they deeply believe the EU is helping prevent war on their continent — and that's why they tend to support it.

There's some deeper evidence for this. "While the project as a whole has mostly been sold to Europeans as an economic one," writes EU public opinion scholars Lauren M. McLaren and Simona Guerra, "the overriding goal of such integration has always been political — namely, the prevention of war on the European continent."

McLaren and Guerra say the way that the EU promotes peace is by replacing individual European identities with a continent-wide one: "because the most recent of these wars, the Second World War, is often perceived to have been motivated in part by nationalist expansion, one of the phenomena to be thwarted was therefore to be the roots of such expansion."

Attempts to obliterate European nationalism are double-edged swords. Many Europeans are still rather attached to their countries; they see the EU eroding their sense of nationalism and react against that. This explanation would suggest cross-cutting pressure between economic and ideological factors: Europeans who benefit economically from the EU and support its peaceful anti-nationalism tend to be more favorable towards the EU, while those who are hurt economically and are more nationalistically inclined aren't as favorable.

The Eurobarometer data, which surveyed the whole EU, supports this interpretation. Eurobarometer asked Europeans "what the EU means to you personally," and let them pick multiple different answers from a set of 16 possible responses. Here are the top 5 most likely to be chosen:

The positive things people mentioned — freedom to move, peace — reflect shared European identity and economic opportunities for those capable of taking advantage of them. The things Europeans reported disliking tended to hamper economic growth or constrain EU countries' ability to make their own decisions. "Eurocrats," a derogatory word for EU bureaucrats, are often accused of harming European democracy, and the EU does fund itself through money that national governments could otherwise use on their own. People noting the importance of the Euro for their lives could be either good or bad for the currency, of course. But all the reasons to support or oppose the Euro have to do with either economic or ideological concerns.

European public opinion isn't just a push-and-pull between ideology and the economy. As McLaren and Guerra explain, decades of EU polls suggest other things matter: for instance, people's attitudes toward the EU tend to track with their attitudes toward the government currently in power in their country. Media coverage plays a role, as do the opinions of political elites and parties in the domestic country.

But, without a doubt, the complex interplay between the economy and ideology matter deeply for Europe's willingness to stick with the EU despite its manifest failures of late. It may explain why, as my colleague Matt Yglesias ably documented last week, European leaders have chosen to prioritize the Euro as a political project over healing Europe's more concrete economic wounds.