The government is prosecuting the immigrants Obama promised to help

Share All sharing options for: The government is prosecuting the immigrants Obama promised to help

For the past few months, President Obama has been working with the Department of Homeland Security to reform America's deportation policies and make them more "humane" toward unauthorized immigrants.

But while Obama's doing that, he might want to pay attention to what's going on over at the Department of Justice, where US Attorneys are prosecuting and convicting hundreds of unauthorized immigrants each month — many of whom are the same immigrants the deportation review is intended to protect.

As a result of prosecutions over the past year, about 4,000 fewer immigrants will be able to qualify for any sort of protection from deportation.

As of March 2014, the most common immigration prosecution was for "illegal reentry." Since immigration accounts for a plurality of all federal prosecutions, that means attorneys are devoting substantial resources to prosecuting people for returning to the US after leaving or being deported to reunite with their families - or having returned years ago.

US Attorneys have a great deal of autonomy when it comes to setting enforcement priorities. And many are now choosing to prosecute illegal reentry cases rather than more serious crimes — in part because the reentry cases are easier to win. Yet most of the immigrants they're prosecuting, especially beyond the southwestern border, are longtime residents with no prior criminal offenses.

Ultimately, this means that Justice Department is working at cross purposes with the Obama administration's stated priorities. The administration has said that it would prefer to go after serious criminals and protect run-of-the-mill unauthorized immigrants. But the US Attorneys are now turning many immigrants in the later group into felons. That will likely make them ineligible for any sort of immigration relief the administration might roll out.

What a reentry conviction means for an immigrant 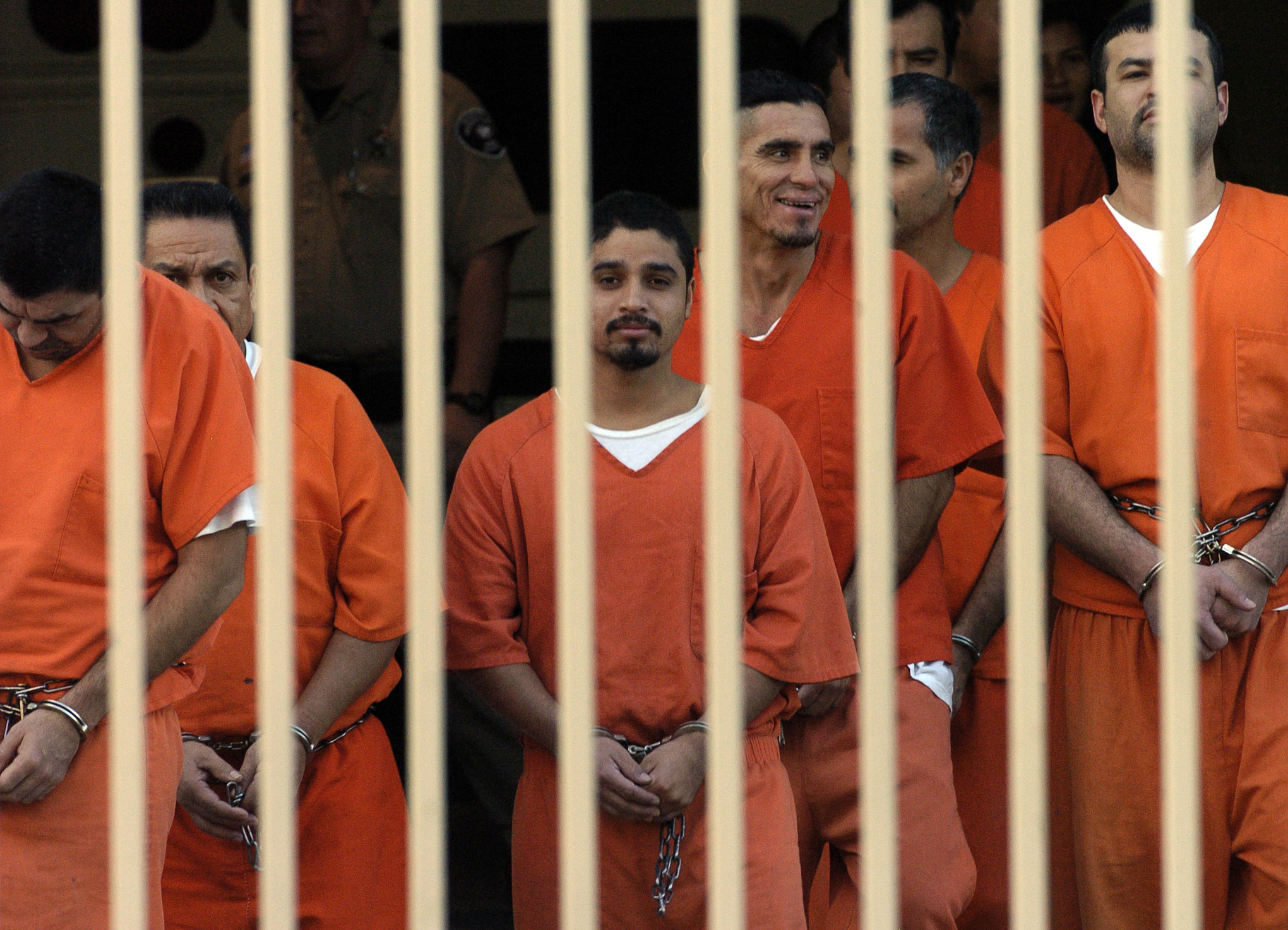 A group of immigrants are led out of federal court in Texas. RJ Sangosti/Denver Post

Not all of the immigrants getting prosecuted for illegal reentry are model residents. But statistically speaking, the sort of people who are most likely to "illegally reenter" the US after leaving or being deported are longtime residents of the US who have jobs or children here, and ties to the community. And many of the hundreds of thousands of immigrants who "illegally reentered" the country at some point have lived in the US continuously for many years since then.

Once an immigrant gets convicted for illegal reentry, he becomes a top priority for deportation

In February, for example, longtime Ohio resident Jose Alfredo Ramos Gallegos was pulled over while driving and asked for ID. When he produced a Mexican ID, the police called in Border Patrol. Ramos was indicted in Pennyslvania on reentry charges — he had been deported in 1999 and returned later that year. (The case raised an outcry among local and national immigrants-rights advocates, and the US Attorney eventually dropped the charges.)

Data from the US Sentencing Commission shows that a majority of people convicted of "illegal reentry" over the past two years are like Ramos — they had no criminal record whatsoever, or a very minor one, before getting convicted of illegal reentry.

Longtime residents with no prior criminal record are (in theory) supposed to be "low priorities" for deportation. But once an immigrant gets convicted for illegal reentry, he becomes a "convicted criminal" — a top priority for federal agents to deport. It's assumed that once he finishes his prison sentence, the US Immigration and Customs Enforcement will be there to pick him up.

So while the Department of Justice doesn't deport immigrants on its own, it can make a deportation inevitable. 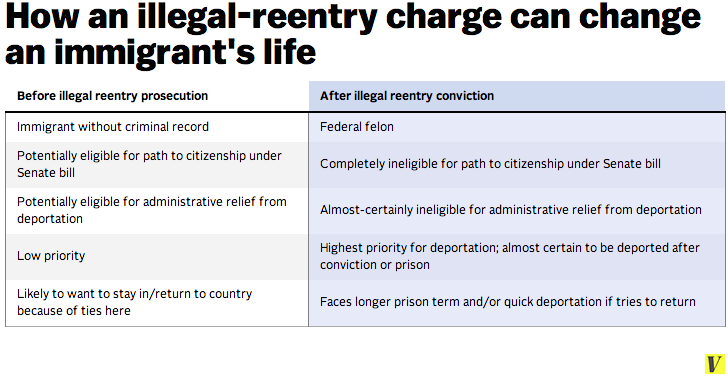 For an immigrant, a prosecution can be even worse than a straightforward deportation — because it is likely to prevent him from ever living in the US legally, or qualifying for any sort of protection from deportation that the Obama administration might offer in the future.

Most politicians who support a "path to citizenship" don't think any immigrants with criminal records should be eligible for it. The immigration bill the Senate passed last year allows immigrants to apply for "provisional" legal status as long as they have no criminal record; if they have one or two minor offenses, they have to file a waiver and hope the federal government will approve it. But immigrants with a felony on their records — even if it's for "illegal reentry"  — are totally disqualified.

There are several points before an immigrant gets convicted of illegal reentry when federal officials can decide not to pursue the case.

Two-thirds of immigrants who get prosecuted for reentry were caught crossing the border. But Border Patrol agents aren't required to send all of them to federal court — and federal prosecutors aren't required to convict them. While prosecutions have gone way up along the whole border since 2006, they've increased in some sectors much more than others: 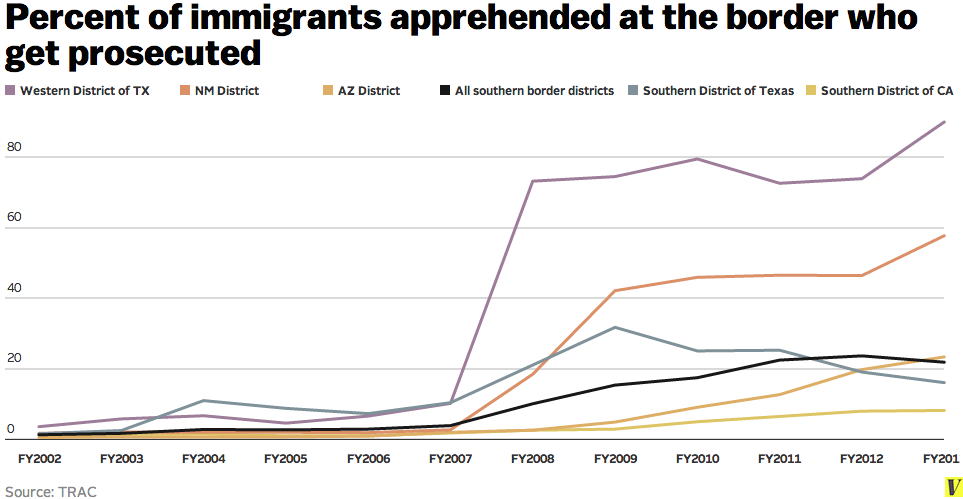 Part of this is how many immigrants get sent to prosecutors to begin with. Border Patrol agents in New Mexico and West Texas are much more likely to refer immigrants to federal prosecutors than agents in Arizona, Southern California or South Texas. There are various reasons for these disparities, including legal precedents and the demographics of border crossers in each sector, but part of it is driven by the decisions of Border Patrol agents themselves (and prosecutors, who have some say in how many people get sent to their courtrooms).

Even after immigrants are referred to prosecutors, prosecutors have the option not to charge them with anything. But along the border, prosecutors almost always charge them anyway. A spokesperson for the Western District of Texas identified "Border Crime" as one of that district's five priorities for prosecution. That district prosecuted 99.7 percent of the immigrants referred to them by Customs and Border Protection over the last ten months for which data is available through the Transactional Records Access Clearinghouse at Syracuse University; only Arizona prosecutes less than 95 percent. 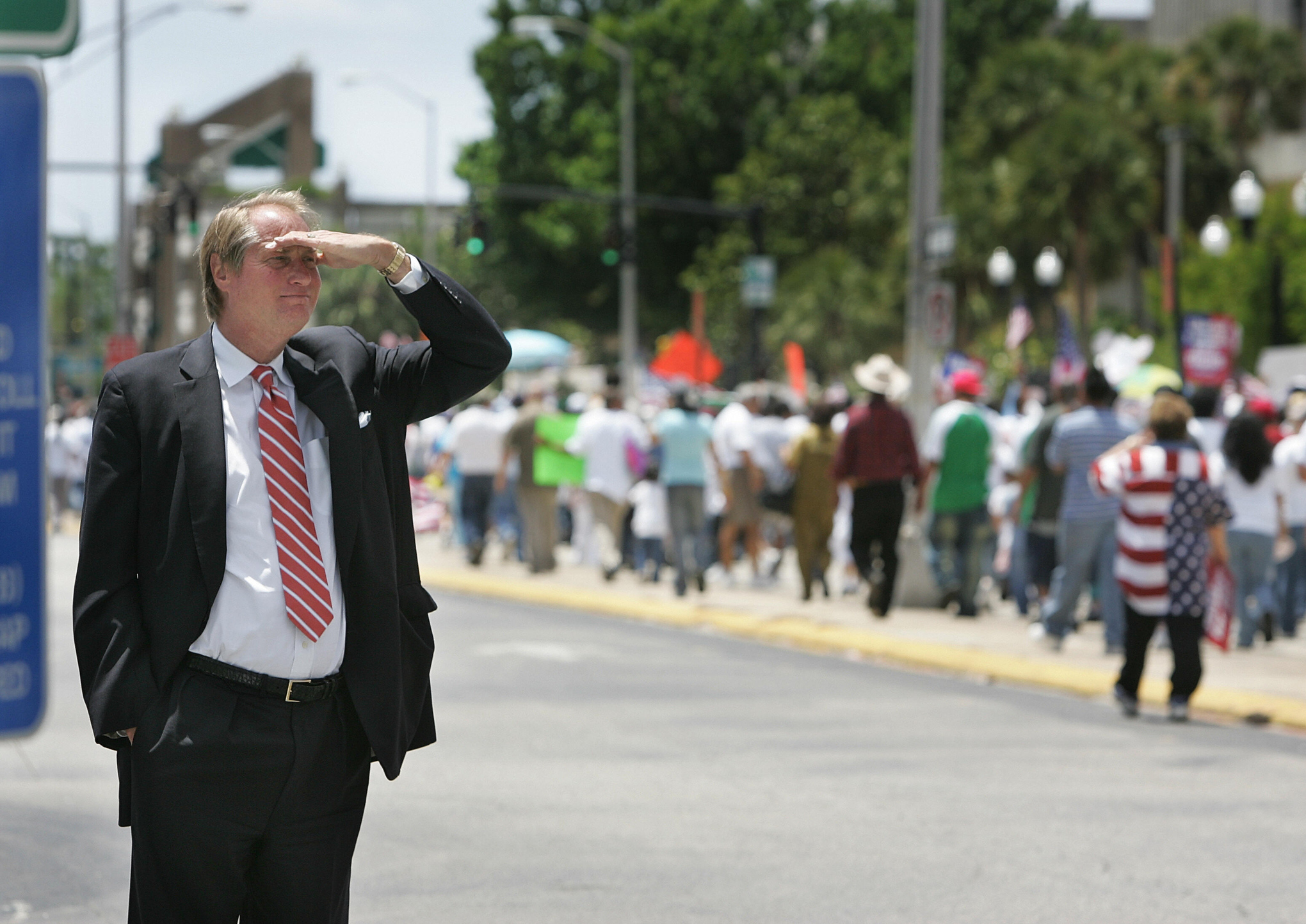 A federal judge who handles immigration cases looks on during an immigration rally in Florida. John Moore/Getty

When it comes to immigrants who get apprehended outside the border — either by US Immigration and Customs Enforcement or by local police officers — prosecutors show a lot more autonomy in choosing who to charge with illegal reentry. And since these are the cases where immigrants have likely been in the US continuously for several years, making them likely to qualify for relief from deportation if they don't have criminal records, that discretion can be especially important.

In some districts, like Utah and Nebraska, prosecutors can be particularly aggressive — they prosecute nearly every immigrant referred to them by Immigration and Customs Enforcement, almost all of whom are being charged with illegal reentry rather than more serious immigration crimes (like smuggling or fraud). Other districts, like Western Michigan, prosecute only half of the referrals they get.

But Marc Rosenbaum of the Migration Policy Institute says that prosecutors aren't necessarily using discretion to protect unauthorized immigrants — they're  probably using it to protect themselves. The more complicated and serious crimes ICE investigates can take more resources to prosecute, and can be harder to win convictions for. A prosecutor in Western Michigan might decide not to prosecute those cases, and instead to focus on the immigration cases that are easy to win: illegal reentry. 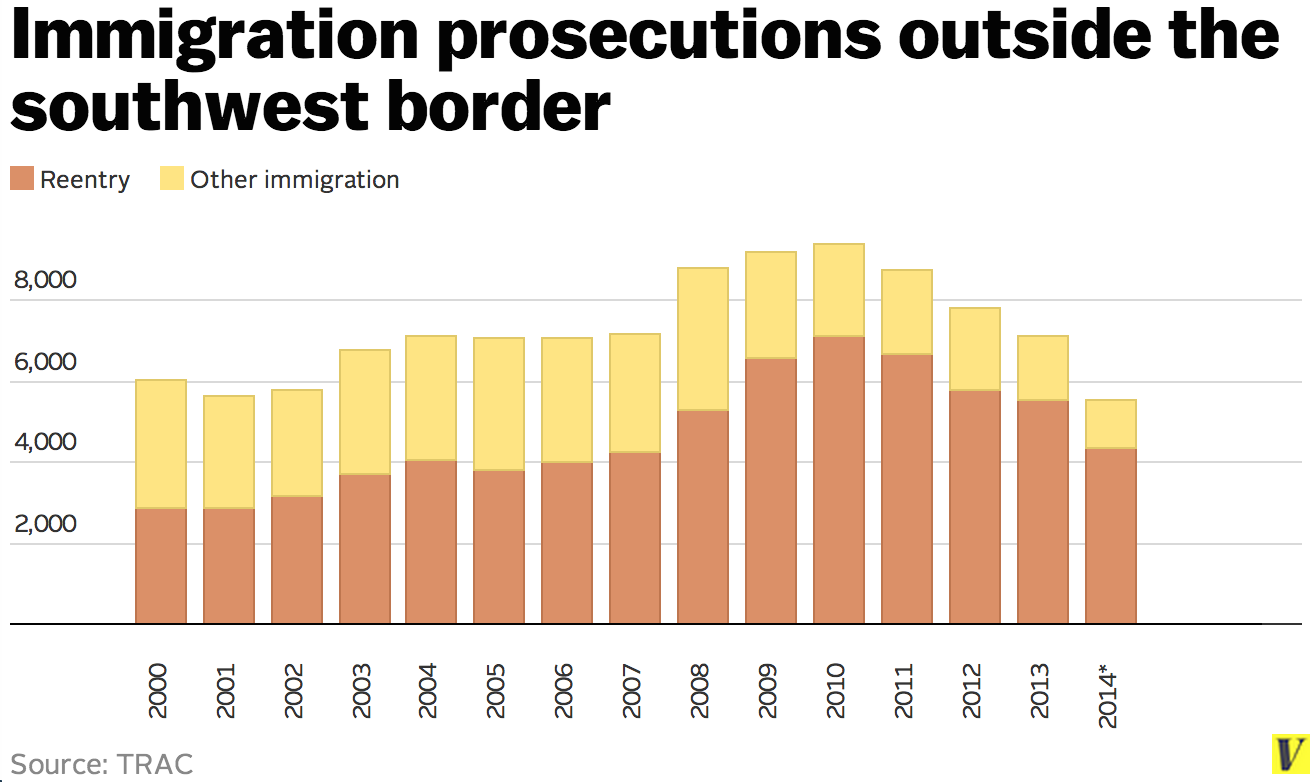 On the border, many prosecutors give immigrants the option of a plea bargain: they can save the court's time by pleading guilty to illegal entry, which is a misdemeanor, rather than reentry. Because of this, the share of immigrants who get convicted of illegal reentry on the border is fairly low. In the interior, on the other hand, almost all immigrants who are charged with illegal reentry are convicted of it — wiping out their chance at relief from deportation.

According to data from TRAC, between August 2013 and February 2014, nearly 3,000 immigrants were convicted of illegal reentry in the interior of the country. If that pattern has held, about 4,000 immigrants who would likely have qualified for immigration relief have been convicted between June 2013, when the Senate passed its immigration bill, and today.

Can the administration change the system?

President Obama and US Attorney General Eric Holder can't control everything that federal prosecutors do. But the spokesperson for the Western District of Texas confirmed that the district "certainly takes into consideration guidance from and policies of DOJ."

And sometimes that "guidance" calls on attorneys to be less aggressive in order to stay in line with administration priorities — as happened with Holder's memo last year telling prosecutors to avoid triggering mandatory minimums for certain drug offenders.

There's nothing stopping Holder from writing a similar memo on immigration. He could simply instruct prosecutors on the interior to offer immigrants the same plea deal they get on the border: accepting a misdemeanor illegal entry conviction so they don't have a felony on their records. That might make it possible for those immigrants to remain eligible for a future path to citizenship, or maybe for administrative relief from deportation.

In the absence of any such guidance from Washington, US Attorneys are making their own decisions about who to prosecute, for their own reasons — and thousands of immigrants face the consequences of conviction, deportation and permanent ineligibility from relief. If the Obama administration plans to do more to protect immigrants without criminal records from deportation, it might want to make sure more immigrants aren't being given criminal records to begin with.